Championship wrestling is put on hold at Menlo College 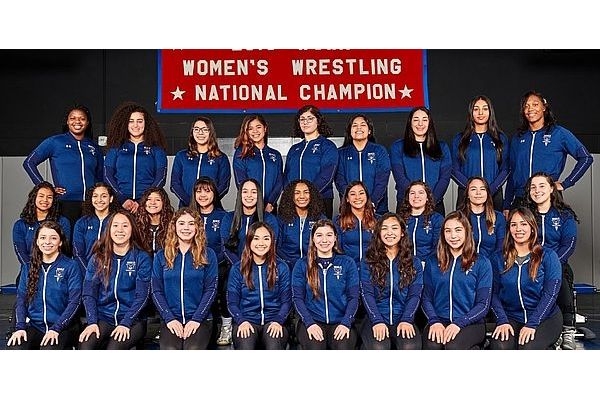 Menlo College senior Precious Bell, the top seed at 170 pounds for the since canceled NAIA Women’s Wrestling Invitational, has a bright future in the sport. She just doesn’t know when it may restart.

Bell, along with five other seniors, had her final season cut short due to the cancellation of all NCAA and NAIA winter championships. At least she can look forward to the U.S. Olympic trials, when and if it ever takes place.

Solin Pearcy/Menlo Athletics
“There are bigger issues on the table. We want everyone to be safe,” Menlo coach Joey Bareng said in a telephone interview. “We can worry about getting back to competition when the time comes.”

Junior Tiana Jackson (123) and sophomore Alleida Martinez (109) also qualified for the trials, originally scheduled for April 4-5 at Penn State’s Bryce Jordan Center. A few others were hoping to qualify.

With the 2020 Tokyo Olympics likely to be postponed, the burden of training for the trials will be eased. Like most elite athletes, there are very few places available to train.

“There is nothing organized,” Bareng said. “The best thing is for people working out on their own, running and staying in shape.”

Pearcy was the top seed at 143 pounds and Garcia was seeded eighth at 155 for the NAIA national meet. Jackson and Martinez were both top seeded.

The Oaks, who finish the year ranked second in the NAIA, had just finished a practice at the University of Jamestown and were headed to their hotel when they received news the meet was cancelled.

“I haven’t had time to process it all,” Bareng said. “It still seems like a dream, like it’s not really happening.”

Bareng said the team was optimistic about the chance to defend its national title and were prepared for it.

“There was no way we were going to lose,” Bareng said. “We had four top-ranked wrestlers and three or four others who could make the finals. It was the first time we were all together and healthy.”

Bareng said his team will be ready when things return to normal.

“There’s a lot of stuff going on,” he said. “Everyone we’ve signed are ready to be here. Until then, no one should be practicing. Everything is on hold. We’ll have time to get ready.”

Singapore's oldest cafe was about to open in Palo Alto. Then, the coronavirus hit.
By Elena Kadvany | 3 comments | 6,675 views

A Pragmatic Approach to A Trillion Trees
By Sherry Listgarten | 4 comments | 4,274 views

Repairing a Disagreement with your Beloved & “Physical” vs. “Social” Distancing
By Chandrama Anderson | 2 comments | 2,977 views