The jury is out: County courts scale back, close facilities due to coronavirus | News | Palo Alto Online |

The jury is out: County courts scale back, close facilities due to coronavirus 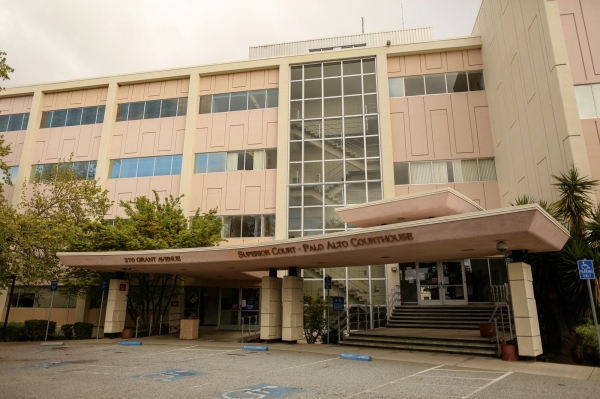 The North County Courthouse in Palo Alto has been shut down — only San Jose courthouses are open — and all clerk's offices have been closed to the public. Photo by Sammy Dallal. 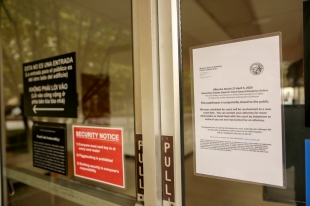 Anyone given jury duty notices from the Santa Clara County Superior Court to report through the week of March 30 will be excused. Photo by Sammy Dallal.

Court hearings are being delayed, entire courthouses are being shut down and prospective jurors are being told to disregard orders to appear as Santa Clara County courts adjust to major restrictions in response to the spread of the new coronavirus.

The changes, announced piecemeal over the last week, carefully pare back court activity to comply with a shelter-in-place order by public health officials banning social gatherings "of any size." All court functions deemed nonessential have been halted.

Santa Clara County, described as the epicenter of the Bay Area outbreak, has reported 196 confirmed cases of COVID-19 as of Friday, March 20.

County jails have also taken measures to ensure those awaiting trial or serving sentences are adhering to public safety guidelines, though four inmates may have been exposed to COVID-19 as of last week, according to the Santa Clara County Sheriff's Office.

As of Tuesday, only 16 of the county's 110 courtrooms remain open for "essential functions," including misdemeanor and felony criminal hearings, arraignments for family violence, restraining orders and conservatorship hearings. The North County Courthouse in Palo Alto has been shut down — only San Jose courthouses are open — and all clerk's offices have been closed to the public.

Anyone given jury duty notices to report through the week of March 30 will be excused and does not need to report to court, while those already serving on a panel of jurors will receive guidance on what to do.

The changes slash the number of hearings that the court system will hold at least through early April.

A plea hearing for 33-year-old transient Jeremiah Porter, who is accused of robbery and attempting kidnapping during a carjacking last month near the Palo Alto border, was postponed until May. Judges have greater flexibility to see defendants past the normally required periods for arraignments, preliminary hearings and trial dates.

The shelter-in-place order from the county means a mandatory shutdown of all businesses deemed nonessential. It also ordered that all residents stay at home and only leave when needed to perform "essential activities," some of which are listed in the county's published FAQ on the announcement earlier this week. On Thursday, state officials rolled out a similar shelter-in-place order for all of California.

Public health officials are urging residents to practice safe social distancing, maintaining a 6-foot buffer from other people and frequently their washing hands. Those who are ordered to come to court are strongly encouraged to "appear" over the phone by calling 1-888-88-COURT.

On Monday, Superior Court Judge Deborah Ryan signed an order that grants county judges the ability to extend any temporary restraining order set to expire through April 5 by as much as 21 days, reducing the need for people to come in to court for renewals.

Jails adjust, some inmates in quarantine

Inmates awaiting trial or serving sentences in Santa Clara County jail facilities are also seeing a host of changes in response to the spread of the coronavirus, according to the Santa Clara County Sheriff's Office, which runs the jails.

Social distancing has been implemented in the Santa Clara County Main Jail in San Jose and Elmwood Correctional Facility in Milpitas, and the number of inmates allowed to leave their cells at any one time has been limited, according to Michael Low, a spokesman for the sheriff's office. Inmates' temperatures are frequently checked, he said, which is a common symptom of COVID-19.

Visitations have been completely eliminated as of Tuesday. The sheriff's office acknowledged that visits are an "essential" part of jail operations, but pose a health risk and had to be eliminated. Legal visits will continue, but through windows only.

"The health and wellness of all those who work, live, and visit in our facilities must be protected," according to the statement. "We will continue to ensure the safety and security of the people who work in our facilities and the continuation of access to medical and mental health services for the inmate population."

There are no confirmed cases of COVID-19 in the county's jails, but four inmates are believed to have been exposed to the virus. The first two inmates, who had contact with an infected visitor, were placed in quarantine for 14 days and are nearly ready for discharge.

Low said in an email that the inmates have been checked daily and showed no signs or symptoms of COVID-19, and that they have been placed in large isolation cells and frequently monitored. The county's custody health director determined that it would be unnecessary to test them for the virus, Low said.

On Thursday morning, a 58-year-old man was found dead in his cell at the Elmwood Correctional Facility. The Santa Clara County Medical Examiner-Coroner's Office will conduct tests to see if COVID-19 was a factor, Low said.

Other counties are taking measures to reduce the number of people in custody, bringing down crowding and potentially preventing the spread of COVID-19. The Alameda County Sheriff's Office announced the release of 314 inmates, 67 of whom were released on their own recognizance and another 247 were approved for early release — a nearly 12% overall reduction in the jail population at the Santa Rita Jail in Dublin. The released inmates were deemed relatively low-level offenders by Alameda Sheriff Gregory Ahern.

Editor's note: On March 23, the Santa Clara County Sheriff's Office issued a press release stating an inmate who was booked on Friday, March 20, at the Main Jail in San Jose tested positive for the coronavirus after reporting he felt sick and a family member visited Europe days earlier.

The inmate, a 31-year-old man, has been placed in an infirmary where he is in isolation.

On Thursday, March 26, the Santa Clara County Sheriff's Office announced six of its deputies, four of whom work in the Custody Bureau, have tested positive for COVID-19. Of the six employees, four worked on the same team.

Find comprehensive coverage on the Midpeninsula's response to the new coronavirus by Palo Alto Online, the Mountain View Voice and the Almanac here.

Singapore's oldest cafe was about to open in Palo Alto. Then, the coronavirus hit.
By Elena Kadvany | 3 comments | 6,611 views

A Pragmatic Approach to A Trillion Trees
By Sherry Listgarten | 4 comments | 4,259 views

Repairing a Disagreement with your Beloved & “Physical” vs. “Social” Distancing
By Chandrama Anderson | 2 comments | 2,963 views