Not much of a gamble: Stanford grad hired to coach at UNLV | News | Palo Alto Online |

Not much of a gamble: Stanford grad hired to coach at UNLV 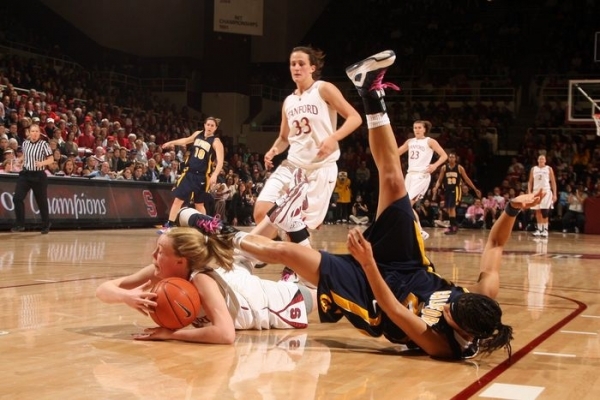 Lindy La Rocque raced the length of the court to make this play during Stanford's 58-41 win against Cal on Feb. 14, 2009 at Maples Pavilion. Photo by Kyle Terada/stanfordphoto.com.

Stanford grad and women's basketball assistant coach Lindy La Rocque was selected for a coaching position at UNLV by Director of Athletics Desiree Reed-Francois on Wednesday.

A key part of 11 straight NCAA Tournament appearances, La Rocque returns to her native Las Vegas where she was a standout at Durango High School, where she became the school’s (boy’s and girl’s) all-time leading scorer with 2,678 points. She also holds many other program records.

Lindy La Rocque/Stanford Athletics
La Rocque played in four straight Final Fours at Stanford and has been an assistant on Tara VanDerveer’s staff the past three years.

"I am so thrilled to be able to come back to my hometown of Las Vegas to lead the UNLV women’s basketball program,” La Rocque said. “It is truly special to return to a place and in a community that has essentially raised and has supported me throughout all of my life. I have been a Rebel fan since I was a young girl and to now be the head coach at UNLV is truly a dream come true. Thank you to Desiree Reed-Francois and President Meana for this incredible opportunity and for their belief and trust in me to lead these young women. I cannot wait to get started."

While coaching at Stanford, the program consistently ranked among the top 10 in the country. The Cardinal reached two Sweet 16s, an Elite Eight and won the Pac-12 Conference tournament championship while La Rocque was a coach. She helped guide Stanford to an overall record of 82-22.

“We are so enthused about bringing Coach La Rocque back to Las Vegas to lead our women’s basketball program,” Reed-Francois said. “Our pool of candidates was exceptional, but Lindy’s character, intellect and energy really stood out. She has worked for and learned from some of the best leaders in sports history and is a rising star in coaching. She will be a great fit for our program, university and in the community.”

Prior to coaching at Stanford, La Rocque spent two seasons as an assistant coach at Belmont University in Nashville, helping the Bruins to a pair of NCAA tournament berths, including the program’s first in nine seasons. Belmont went 51-15 overall and 29-3 in Ohio Valley Conference play during La Rocque’s tenure, winning the league’s regular-season championship and the conference’s tournament title both seasons.

La Rocque began her coaching career as a graduate assistant at the University of Oklahoma, working for Hall of Fame coach Sherri Coale while pursuing her master’s degree in education. The team played in both the 2014 and 2015 NCAA Tournaments.

La Rocque played at Stanford from 2008-12, appearing in 138 career games, which ranks eighth in program history. She was instrumental in helping the Cardinal compile a 137-12 overall record during her four years, including a 71-1 mark in Pac-12 play. Her team won four regular season conference championships and four league tournament titles, appearing in the NCAA Tournament each season and advancing to the national title game in 2010.

She became a fan favorite for her defensive intensity and willingness to dive after loose balls.

The eighth full-time head coach in UNLV women’s basketball history, La Rocque is the first from Las Vegas to be hired to lead the Lady Rebel program.

La Rocque earned a bachelor’s degree in science, technology and society, with an emphasis in earth systems, civil and environmental engineering, and calculus from Stanford in 2012. She holds a master’s degree in adult and higher education from Oklahoma.

Singapore's oldest cafe was about to open in Palo Alto. Then, the coronavirus hit.
By Elena Kadvany | 3 comments | 6,634 views

A Pragmatic Approach to A Trillion Trees
By Sherry Listgarten | 4 comments | 4,264 views

Repairing a Disagreement with your Beloved & “Physical” vs. “Social” Distancing
By Chandrama Anderson | 2 comments | 2,965 views