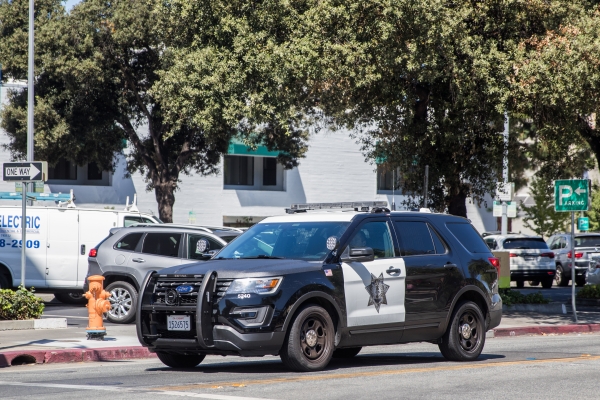 The Palo Alto Police Department is modifying patrol operations for nonemergency calls so that they can be completed by phone and video due to the coronavirus crisis. Weekly file photo by Veronica Weber. 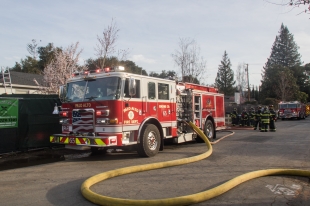 The Palo Alto Fire Department has been putting together multiple plans if it runs low on protective gear as a result of the COVID-19 pandemic. Weekly file photo by Veronica Weber.

Despite an order across Santa Clara County to shelter in place and avoid potential exposure to the coronavirus, Palo Alto isn't planning to have police officers knock on doors or making sure residents are heeding instructions and staying home.

Rather, the city's emergency responders are focusing their efforts on planning for what could be an unprecedented, monthslong public health emergency and making sure that they have the needed supplies and personnel to adequately respond. This includes limiting staffing levels, requiring many employees to work remotely and discouraging the sharing of equipment.

That was the message that Ken Dueker, director of the city's Office of Emergency Services, Police Chief Robert Jonsen and Fire Chief Geoffrey Blackshire delivered to the City Council on Monday night, during a discussion of the city's response to COVID-19, which has already scaled back City Hall operations and has prompted school closures and shuttering of city facilities and many businesses.

Councilwoman Liz Kniss said that in the aftermath of the Monday order from six Bay Area counties, residents have been wondering whether they can still leave the city — or the country.

"Someone else said, 'Are the police going to come and knock on your door to make sure you're there?'" Kniss said.

Dueker assured her that the answer is no.

"We will not be using our precious public safety resources to check on people in their homes or do anything that's even close to unconstitutional," Dueker said. "People have freedom."

He also noted that the county order has "a lot of freedom baked into that." Even though it orders people to shelter in place, it makes exceptions for trips to the grocery store, to the pharmacy and for medical appointments. It also allows residents to go for a walk, get exercise and visit open spaces, Dueker said. Those venturing out are asked to stay at least 6 feet away from others.

And while the order requires residents to work from home (or not work at all) until April 7, it also makes an exception for those in "essential functions," a category that includes — but isn't limited to — emergency responders and utility employees who are critical to the city-run electricity, gas and water operations.

The city issued a statement Wednesday underscoring that while public health orders can be enforced criminally, that is a measure of "absolute last resort for the Palo Alto Police Department."

"The priority for our police officers will always be to educate and then ask for compliance with any public health order, and we are confident that our residents, businesses, and visitors will do their part to comply with temporary restrictions," the Wednesday statement reads. "The Palo Alto Police Department's patrol division will continue to be out and about in the community, ready to respond to any calls for service that may come in."

The city also announced that it will lift several parking restrictions, including enforcement for timed parking. It is also suspending the residential parking permit program, which limits parking for nonresidents on residential streets unless they have permits.

City Manager Ed Shikada said he is planning for what he expects to be at least a "multimonth" situation. As such, the city is trying to minimize person-to-person interaction between employees. Dueker said the Fire Department's natural structure, with rotating shifts, allowed the city to require those firefighters and paramedics who are currently on training and planning assignments to telecommute. The city had implemented that measure several days before the county's March 16 order, Dueker said.

Fire Chief Blackshire said the Fire Department has been putting together "plan, after plan after plan" for what to do if it runs low on protective gear. Though the department has been transporting many patients with symptoms that are associated with COVID-19, there hadn't been any "red flags" for paramedics because they've been able to protect themselves with appropriate equipment, Blackshire told the council. He called the shortage of protective equipment across the country a "national crisis."

"If there's anything to worry about, that's it. But we're on top of it," Blackshire assured council members.

Dueker also said the city is following guidance from the Centers for Disease Control and Prevention and planning for an absenteeism rate of 40% or more.

"It's absolutely one of the many contingencies we're trying to work on," Dueker said.

"We're minimizing interaction between staff to the extent where it's unnecessary and continuing to work with assigned equipment and assigned vehicles, as the case may be, in order to minimize the necessity of using common materials," Shikada said.

Jonsen said his biggest concern is protecting the health of Police Department employees. Over the past few days, the department has discontinued public tours and police ride-alongs. It is also requesting that members of the public who are ill to stay home and call the department at 650-329-2413 for nonemergency services. The city's frequently asked questions page on coronavirus states that the department is modifying patrol operations for nonemergency calls so that they can be completed by phone and video.

"We have staff that really is essential and we're trying to do our best … to protect their well-being," Jonsen said. "Because they are resources that we're going to need all the way through this. Hopefully, we'll be able to sustain our workforce. And if not, we'll modify and adapt and we'll serve this community."

Emergency responders and council members acknowledged that their ability to respond is limited, given the scope of the crisis and the functions that the city and the state are playing. They also agreed that the city needs to have a consistent communication channel with the public. To help with that, the city launched on Wednesday afternoon its Community Support Call Center, which allows the public to find answers to coronavirus questions. The center can be accessed at 650-272-3181. It will be open Monday to Friday, between 8:30 a.m. and 6 p.m.

City leaders also acknowledged that with the pandemic still in its early stages, much about it remains unknown. Dueker told the council that the city is in "uncharted territory." The pandemic, he said, is different from the typical emergencies that responders plan for, including earthquakes, major crimes and cyberattacks. His biggest concern, he said, is "what we don't know – the unknown unknowns."

"We've been a little bit ahead, but we can't confuse lucky with being good," Dueker said. "There may be other shoes that drop that are hard for us to imagine."

Find comprehensive coverage on the Midpeninsula's response to the new coronavirus by Palo Alto Online, the Mountain View Voice and Almanac here.

It means, Ted, that they continue to adjust their plans as circumstances and information change. Sarcasm isn’t helpful.

Sorry Rose, I disagree. What is the plan if our first responders are running low on protective equipment and the shortage is a “national crisis”. Not “we’re of top of it”.

Posted by Sylvia, a resident of Another Palo Alto neighborhood

>> Sorry Rose, I disagree. What is the plan if our first responders are running low on protective equipment and the shortage is a “national crisis”. Not “we’re of top of it”.

As stated, I agree with you. But, I think what the Chief was trying to convey was, "We have identified the problem and we are working on it. You don't need to remind us or waste our time constantly asking about it." But, reporters, and the public, don't always have patience with the long answer.

And, unfortunately, sometimes the answer just isn't what people want to hear. If all the [X's] are made in China, and, China needs more [X's] than can be produced, then, they may not be shipping enough [X's} overseas. In a world of just-in-time-manufacturing, there just may not be any warehouses anywhere filled with [X's] waiting to be shipped. In a world of lean production, "we" -- the world's people -- need to figure out who, what and where regarding storage of emergency supplies. The pandemic has revealed that we have to go beyond water, food rations, and bandages.

Report Objectionable Content
Email Town Square Moderator
3 people like this
Posted by Rick
a resident of Adobe-Meadow
on Mar 20, 2020 at 11:10 am

I have a suggestion for our FD: they can go from grocery store to drug store and make sure that the retailers are following best practices. From what I observed this morning they are happily spreading Contagion from one customer to another by not changing nor disinfecting gloves between customers. This is crazy folks. We need ratings similar to those goven out by the health department. If you are not an "A" in Preventing transmission of bacteria and virus, you should be shit down!

Report Objectionable Content
Email Town Square Moderator
2 people like this
Posted by Anon
a resident of Another Palo Alto neighborhood
on Mar 20, 2020 at 11:36 am

Well, I drove out to make a purchase this morning and discovered an odd, dangerous phenomenon: drivers who think that the rules of the road no longer exist, even in the presence of other cars. In a few minutes of driving, I saw some unbelievably bad aggressive driving. What the heck is going on?

Police: please get out there and enforce safe driving!

If you have to go out, be careful out there.

A Pragmatic Approach to A Trillion Trees
By Sherry Listgarten | 1 comment | 3,293 views

The University of California’s flexible policies during COVID-19
By John Raftrey and Lori McCormick | 6 comments | 2,297 views

Repairing a Disagreement with your Beloved & “Physical” vs. “Social” Distancing
By Chandrama Anderson | 1 comment | 2,089 views