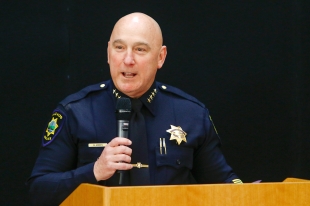 Robert Jonsen addresses a crowd of police officers, city officials and other dignitaries during his swearing-in ceremony at City Hall on March 29, 2018. Photo by Veronica Weber.

For the past 15 years, an independent police auditor has been reviewing citizen complaints against Palo Alto officers, as well as uses of a Taser and — in some cases — internal conflicts within the department. But in 2019, the auditing company, OIR Group, didn't release a single audit, largely as a result of the city's sudden decision to change the auditor's scope and exclude from its purview internal conflicts between personnel. That change, which the City Council approved in December, ensures that such conflicts will now be the purview of the Human Resources Department and, as such, will not be disclosed to the public.

The decision to change the policy came at around the same time that a 2014 incident in which a police supervisor used a racial slur became publicized. Some critics of the department have maintained that the change was made to keep the incident out of the auditor's reports, which are public. After this interview with Jonsen, OIR Group released a police audit — its first since October 2018 — that attributed the delay to the city's request that the auditor keep the report in "abeyance" while the policy is being revised.

The Palo Alto Weekly sat down with Jonsen on Feb. 27 at his office to discuss this issue, as well as car break-ins, use-of-force controversies, the public's growing expectation of the release of video footage and the biggest challenges facing the department.

In this Q&A, Jonsen says that the city attorney and city manager — not he — manage the release of police auditor's reports. He also expresses frustration over being expected to address the 2014 incident, which happened four years before he became chief.

Weekly: One of the safeguards Palo Alto has is the Independent Police Auditor (IPA). It's been a long time, since October 2018, since we've had a report. It's been misunderstood by many, including myself, on why it's taken so long. I've heard a variety of answers from (auditor) Mr. (Michael) Gennaco, from the city attorney, from yourself speaking to the council. Can you explain to me why it's been a year and four months since the last report?

Jonsen: When I walked into the door, the auditor was already in place, which I have no problem with because I worked with Mike Gennaco and his office down in Los Angeles — the Office of Independent Review (OIR) — and was a big fan of having that outside auditor and the working relationship. He knows my outlook on this relationship, which I do feel is a positive one and a necessary one, which I'm not opposed to at all.

We let him know when we get a complaint from the public; we send him those complaints when we're done with them for him to review and report on.

The reporting process is not mine to be concerned about. That is the relationship between Mike Gennaco, the CMO (City Manager's Office) and the City Attorney's Office. Am I happy that we're still waiting on the 2018 report? No.

There's things that always come up in these reports, these areas where we can improve on, suggestions. But it's two years old now and there's a lot of things that we've probably already done. But when the public reads the report, they think nothing is being done.

One of the things that continually comes down is a case that occurred well before I arrived here regarding a manager of this department.

The 2014 case. What I'm going to say as chief of this department today — how something was handled in 2014 is not my concern. Do I have a concern about behavior today? Absolutely. Will I hold my people accountable today? And as I mentioned at the study session — at all levels, respect.

It's frustrating to be a chief where people are saying, "You've got to do something about this" — based on something that happened six years ago. That was something for the prior chief to address. How they addressed it was up to them; how they dealt with it was up to them.

I'm not holding you responsible for what happened in 2014, but the incident gained publicity just the last couple of years, and some people believe that incident is tied to the IPA report (delay) and to new rules regarding IPA reports.

There was room for improvement (in the IPA process). We talked about it — me, the city manager and the city attorney — when they went to council for a new contract (with OIR). I don't like areas that can be seen as a loophole. If HR was going to investigate something, that's their prerogative. If they're going to handle internal city matters — that's their silo, their area of expertise.

My relationship to this community is: If a community member files a complaint about our personnel and we investigate it, I am not as a chief going to send it upstairs or somewhere else without having full responsibility about the outcome of that. That's when I'm trying to make sure there are no loopholes.

But I feel like under any circumstances, you would still have authority to investigate these conflicts because Gennaco investigates your investigations in addition to other stuff. By changing the rule last December, I feel like it narrowed the cases that would go there and keep them out of public eye.

I don't think they narrowed it; they clarified it.

I feel that if there's a nexus to the public, I truly believe it needs to go to Mike Gennaco's office. If it has to do with an employee's beef with another employee over a promotion or an evaluation, that's an internal type of complaint that I don't feel needs to be reported to the public.

In which bucket then would you place the 2014 Capt. (Zach) Perron incident? It's a beef within the department, but the implications are that there are attitudes that could spill out into community work.

At times, the public gets a piece of information and the piece of (a) situation without knowing all of its context. If you were to go back and look into that particular case...

I spoke to the officer who was involved and who corroborated what was reported in (Daily) Post. So I have no reason to think he's lying.

I'm not even asking that. From some of the articles I read, he was the one who filed the complaint and that spiraled things; maybe some people think the comment was made to him. What I'm trying to get at is, you have to have all the information before you just start saying, "Something needs to be done."

Even not knowing all the context, I can't think of a context where that comment would be OK.

I'm not saying it's OK either, in any context. In that particular case six years ago, I wasn't privy to it, so I won't comment on it. Today a comment like that made today under my command would not be tolerated. Period.

Just to be clear, my question is: Does the incident have anything to do with the (new IPA report) rules? Because that's the suspicion. You heard Aram James talking about it (at the Feb. 24 council meeting on community policing) — like you're protecting.

It's not that incident alone. It's the processes we were trying to look at, and the timing. As a new chief coming in, I was trying to get an understanding of who does what, when they do it and what the outcome was. It was the combination of trying to work through all of that, so moving forward we can have a clear understanding of what my silo is, what HR's responsibility is, what the City Manager's Office's is. ...

I think what the community can expect this year is you're going to get these reports much faster. Now it's just a matter of getting back on track, putting them out. I hope we won't have to wait two years for the final report of 2019.

I hope so too. You heard Aram James ask: Will this apply retroactively — to 2014 case — will IPA consider that case or is it now viewed as outside the scope of IPA?

I don't believe it does (apply). We're not going back to 10 years ago, six years ago. ... At some point as a community we have to say, "Let's start fresh." And I'm not trying to cover anything up, not trying to block anything.

We're probably not going to get past that. That's a reality.

A Pragmatic Approach to A Trillion Trees
By Sherry Listgarten | 1 comment | 3,263 views

The University of California’s flexible policies during COVID-19
By John Raftrey and Lori McCormick | 6 comments | 2,274 views

Repairing a Disagreement with your Beloved & “Physical” vs. “Social” Distancing
By Chandrama Anderson | 1 comment | 2,062 views