Q&A with the top cop: On video recordings 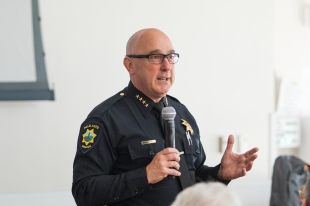 Like other police departments across the nation, Palo Alto's is increasingly relying on video footage to review interactions between officers and the public. When Jonsen arrived in Palo Alto, the department had a total of 10 body-worn cameras; during his first year, it added 50 more and made them standard equipment for sworn officers on duty (this is in addition to the video systems in police cruisers, each of which includes five cameras).

In some high-profile incidents, like the officer-involved shooting that occurred on Christmas Day in 2015, video footage was used during the investigation (and then released to the public) to clear the officers involved of any wrongdoing. Yet the department has also seen some cases — including a bungled June 2019 medical response in which it took emergency responders more than 40 minutes to get a Barron Park woman who was exhibiting stroke symptoms to a hospital — when an officer failed to turn on her camera, fueling public suspicions about what actually happened.

While the department is adding video technology, California lawmakers are adopting new laws making it easier for the public to acquire information about department activities, increasing both transparency and public scrutiny of police activity.

The Palo Alto Weekly sat down with Jonsen on Feb. 27 at his office to discuss this issue, as well as use-of-force controversies, the police auditor reports, car break-ins, and the biggest challenges facing the department.

In this Q&A, Jonsen says that the public may not be ready for the full transparency that releasing all videos would bring.

Jonsen: Honestly, if it was my world, Bob Jonsen's world, we'd probably have all body camera video accessible from the minute it's downloaded. ... That's just not the way the system is set up. These are well-established laws, policies and protocols that protect officers' information.

We as a society are starting to go on the road of opening the door a little more, of making it more accessible with the passage of Senate Bill 1420 and some of these transparency laws that are now in place. We're getting there to what the public really wants, which is immediate accessibility to everything we do.

With all that said, I'm not sure if the public is even ready for that. ... I'm happy these laws have been passed, I think it's good for us; it's good for transparency -- but what the community is going to see are worst-case scenarios. They're not going to see the thousands of times that law enforcement officers throughout this country take people into custody peacefully.

Weekly: Last time Palo Alto had an officer-involved shooting, the video was made available and it showed that the person who was shot was with a knife in the middle of the street. It helped people understand why the person was shot. In some cases, even it's the worst-case scenario, it can make the community feel better.

What I was getting at when I said they're "not ready for it" is that we have 160,000 files of our interactions. If we open the door -- and please don't say I'm against it because I'm not -- if the society decides we want the door open to all of it, immediately, they also have to be willing to go to where -- when I stop you, at a traffic violation, you know you'll be accessible to the world in how you interact and behave. That's where I'm not sure if we're ready as a society to say: "Do I want my dispute with my significant other, where officers responded, being released for the world to see and evaluate?"

That means ... interactions with everybody, not just the people we take into custody.

I want to ask you about a 911 case that we wrote about from June 2019, where it took a long time for a woman to get medical help. City Manager Ed Shikada told the council that there's been steps taken after that to revise some of the procedures about these responses. Can you tell me what, if anything, has changed since then?

That's another one we're still doing a lot of review of. We've immediately put some mechanisms in place to make sure we're providing the best services possible and the fastest responsible times possible.

And the first thing we looked at was our staging protocol. We made sure working with (the) fire (department) that we're on the same page in response protocols so next time a 911 call comes in, we don't want the person who is receiving the call to be figuring that out because they're only the recipient of what's being told to them.

If they feel that it's a medical emergency, we're going to respond and we're not going to tell anyone to stage. We're going to be proactive, get there and stage it.

We've had trouble getting body camera footage from Adrienne Moore. We got a letter from the city saying it doesn't exist. Do you know what happened to that, given that you said at the Monday meeting that camera footage is almost always available and this one is missing.

I'd rather refrain from commenting because it's one of the cases we're still looking at. What I will say, for the public's benefit is: We look at every incident and we look to see if it was captured and that policies were adhered to.

Was it in this case?

Absolutely. That is unequivocal. That incident was captured from start to finish.

A Pragmatic Approach to A Trillion Trees
By Sherry Listgarten | 1 comment | 3,266 views

The University of California’s flexible policies during COVID-19
By John Raftrey and Lori McCormick | 6 comments | 2,275 views

Repairing a Disagreement with your Beloved & “Physical” vs. “Social” Distancing
By Chandrama Anderson | 1 comment | 2,067 views