Q&A with the top cop: On use of force 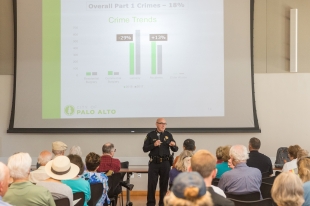 In November, the City Council approved a $572,500 settlement with Gustavo Alvarez, a resident of Buena Vista Mobile Home Park who was slammed into a windshield and mocked during a February 2018 arrest. Days after the finalization of a settlement with Alvarez, the city received another claim that alleged excessive force. Filed by Cody Salfen, the attorney who also represented Alvarez, the claim by Julio Arevalo asserted that he was beaten in front of Happy Donuts by one of the officers who was involved in the Alvarez arrest.

Even though both incidents captured headlines, the department's recent annual report asserts that use of force remains very rare. Jonsen told the council on Feb. 24 that of the 2,183 arrests Palo Alto officers made in 2018, force was used 18 times.

The Palo Alto Weekly sat down with Jonsen on Feb. 27 at his office to discuss this issue, as well as car break-ins, Proposition 47, the public's growing expectation of the release of video footage and the biggest challenges facing the department.

In this Q&A, Jonsen addresses the allegations of excessive force and emphasizes his expectations of his officers: respect at all times.

Weekly: You made a point at the meeting and at your annual report that use of force is extremely low: 0.008% (in 2019) is what you cited. But when It happens it tends to be big. The two most recent publicized cases both happened in the same area and involved at least one of the same officers: Agent (Thomas) DeStefano. The attorney for victims has said repeatedly that this guy shouldn't be on force, that there's a big problem with police brutality. Is there any assurance you can offer to the community that you are seriously investigating incidents in which force is used? As far as the public can tell, he's on the force and he's been involved in three cases that involve lawsuits.

Jonsen: I can't get into specifics, especially the cases you're referring to because both are still ongoing in one capacity or another. What I can say and will say and have always said is that I do hold my people accountable. And I make it very, very clear: I will not tolerate when we do not treat people with respect.

I'm also a realist in that we do not live in a world where everybody always obeys the rules of law and the orders that officers may have the authority to impose on them. In both of these incidents, the reality is the individual on the other side did not do what the officers were asking them to do.

I look at the incident from start to finish – all aspects. Did (the officer) start with respect? Did he have authority to impose anything over this individual? Was it lawful, was it legal, was it righteous from there? I also look at the other individual's behavior, whether they complied with the request being made. Were they resisting? Were they physically assaulting? Was there a verbal confrontation and was the response reasonable?

Was the response reasonable in those cases in your opinion, knowing that limited portions of the videos are out there?

That's exactly the thing. I won't get involved in the second one, near Happy Donuts. That's still being reviewed in a lot of different ways. But I've seen this in every organization I've been in, whether in Los Angeles, Menlo Park or Palo Alto. There are officers that are very engaged in protecting this community, and they gain an expertise on who is committing the crimes in this community, and they'll focus on people they have arrested in the past, who they know are on probation, they know are on parole, they know are connected to criminal activity.

The frequency of engagement with these individuals can be very high. If you take those kinds of officers who focus on those specific demographics – and some of them, that may be their job, they may be assigned to a special enforcement team that's really targeting criminal offenders – you put them in those situations.

So at times they resist that interaction, and that's when problems start to unravel.

I'm also a realist, and I know our officers and I've seen it – they'll start off with respect and, by gosh, that suspect does not care; he does not go along with the program. They're going to have to take him to the ground; they'll have to get him in handcuffs. The moment those handcuffs are on and once he's clearly in our custody and complying, we better be back to 100% respect and making sure his well-being is being taken care of.

And in that particular incident, I don't feel we met that standard.

What about the (Julio) Arevalo incident (at Happy Donuts)? His orbital bone was shattered and he lost consciousness during arrest.

I don't think any officer goes out there with the intent of breaking a bone. They don't. But again, there comes time when they have to use force. Their intent is to gain control over an individual. When they take someone to the ground, they're taught how to do that in the most controlled fashion possible, quickly and effectively, with the least amount of force.

In that particular case, yes, he took the individual to the ground, but everything after that particular point was 100% professional. He did what we expect him to do. He made sure (Arevalo) got medical treatment and checked on his well-being immediately.

What some people are concerned about is it's the same officer involved in the same cases. ... Is this the effect of the fact that he has to deal with this beat and has to deal with high-profile cases? If you see the same name popping up, you have to ask, "What's going on here? Why is he still here?"

I want to caution people about it: Don't judge until you know all the facts. ... Don't be naïve in thinking that everyone complies with what we do.

That 0.008% – that's only the number of uses of force in apprehension and arrest, but if I were to take that number and add in all the interactions these officers have had, all the calls they've responded to, the number would be far lower.

That's the thing that the public (should know). They think everyone is happy to see us; no one is ever happy to see us. For the most part, when people call the police ... they're frustrated. They're a victim of a crime or they're upset with a neighbor or having a family dispute, so our officers have to mitigate all these things all the time.

More in this series

This is part of a four-part series.

A Pragmatic Approach to A Trillion Trees
By Sherry Listgarten | 1 comment | 3,284 views

Repairing a Disagreement with your Beloved & “Physical” vs. “Social” Distancing
By Chandrama Anderson | 1 comment | 2,081 views