Q&A with the top cop: On car break-ins 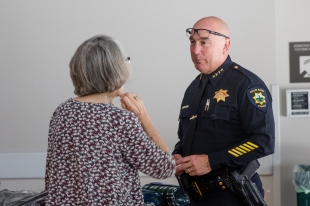 While the latest annual report from Palo Alto Police Department underscores that Palo Alto remains a safe city, with assaults and residential burglaries trending downward, the city saw a spike in car break-ins last year. The number of larceny cases, which includes smash-and-grabs, went from 1,187 in 2018 to 1,724 in 2019.

At a Feb. 24 study session, Jonsen told the City Council that most of these car break-ins were performed by organized crews who come from other cities. He also noted that this is a regional problem, with neighboring cities such as Menlo Park and Mountain View also experiencing recent crime waves in which dozens of cars are burglarized over a short period of time.

The Palo Alto Weekly sat down with Jonsen on Feb. 27 at his office to discuss this issues, as well as recent use of force, the public's growing expectation of the release of video footage and the biggest challenges facing the department.

In this Q&A, Jonsen explains how Proposition 47 has lessened law enforcement's ability to hold certain burglars and drug offenders accountable.

Weekly: Last time we chatted was before you implemented the new (Advanced) Citizen's Academy and the chief's advisory group. You mentioned one of the values of the advisory group was identifying some of intersections that the traffic team should look at. In what other ways does it provide value to you?

Jonsen: I think it's an ongoing relationship and engagement -- face to face. If I'm not engaged and communicating -- not only inside the building but outside the building -- little things can be missed. That's where I think the value is of having both groups -- the inside group (is the) command staff, network supervisors. The organization may say, "Everything is going great." But then I'll be at a neighborhood meeting and they'll say, "We still have concerns or issues about this" -- whatever "this" is. That's when I can go back to my side.

Anything else besides traffic?

Car break-ins have been a common theme at community meetings. It appears most agencies and cities throughout the entire region are impacted by vehicle break-ins.

Is there anything you can do about it, given that it's so quick that by the time you get the call (offenders are gone). How can the department respond to that?

We have a crime analyst, so we're well aware of how frequently they're occurring, where they're occurring in the city. We get this data; we send it out to our patrol officers. We do put operations in place to try to offset it.

But I also think these crews are getting increasingly sophisticated. If they see a patrol car anywhere in the area, they'll just go a couple of streets over and hit that street. I really preach high visibility. I think it's important as a deterrent mechanism and it does work, but it's not going to prevent it.

Some of the things that I think will prevent it is we have to as a culture look at our laws. Prop. 47 did reduce the penalties for a lot of these theft-related offenses and the standard on those. That's why it's become so prevalent. Because the consequences -- even if they're apprehended -- are not as severe as they once were.

So what would happen to a typical person who is in one of these crews and gets nabbed?

The penalties associated with property crimes ... they're not as significant as they once were. It's very, very common that someone who is apprehended for a property-related offense alone is most likely going to be released within a day or two, and they'll be out and probably doing it again.

And the same thing goes for even the reclassification of some of the lower-level offenses pertaining to drugs. ... When we capture someone for under the influence or possession of cocaine, if it's simple possession, it's considered a misdemeanor and they're really receiving a citation exactly like you would on a traffic violation. It's a promise to appear.

A few years ago, before Prop. 47, if somebody is under the influence and an officer would arrest them -- at least that person would be taken to jail, have time to sober up a little bit and maybe get resources they needed right then and there. But now, we're literally just giving them a ticket, allowing them to continue to be under the influence. Those are the individuals that may go steal something because they need to go back, find something to pay for the narcotics that they want to continue to do. So it's a cycle that doesn't seem to be working.

Would I be wrong to say you're not a fan of Prop. 47 based on what you just said, or is that going too far?

No, it's not going too far. I think there was some positive thought behind it. If you look into it, there were some measures in there hoping to get people who have drug addiction get the service that they needed to get off the addiction. I don't feel those mechanisms are reaching the people who really needed them because the process is just not there anymore. I don't feel they're getting that direct access, the accountability that requires them to get these services.

It just seems to be a cycle -- a revolving cycle. If someone is under the influence, they can stay under the influence for a long time now before someone finally says, "We're going to hold you accountable." And that would be the court system and that could be a year down the road.

So good intentions but not always good consequences?

Good intentions but the outcomes I think have prompted us to say -- we may not have to go back to the way we were pre-Prop 47, but -- let's start holding people a little bit accountable for their behavior. If someone used to steal something because they're down on their luck and they just needed food or something like that -- petty theft and shoplifting -- it was considered "lower level."

But they're taking the system now into a business model -- because these thefts aren't done by individuals who need that iPad or that laptop. They're doing it to sell it for the business.

That's why we call them crews. There's multiple individuals going in and grabbing stuff with the driver ready to go.

That's the other part of the equation that I know other agencies battle with. The criminal enterprise has realized our policies related to pursuit ... most agencies do not pursue property-related offenses alone.

What do you mean by "pursue"? If someone steals something but doesn't hurt that person, you wouldn't investigate?

We'd investigate, But whether we'll pursue you -- meaning, lights and sirens and a vehicle pursuit -- is a whole (other) story. Those pursuits can be very dangerous. ... It's too dangerous to be chasing people down the street, especially in the city of Palo Alto, where congestion and traffic flow patterns are unlike any other city I've ever been a part of.

It's just an unfortunate time we're in because it all starts lining up in the criminal's favor more than in the public's favor.

Really pleased you are reporting on this. It helps to understand the factors contributing to this.
How we solve this is unclear, but Prop 47 doesn’t seem to be helping. Maybe the answer is to cut off the money source: namely, never leave valuables in your car. It’s a pain, but it might be our best chance.

I would also like to see a discussion about the increased number of flagrant store thefts measuring thousands of dollars. These appear to be happening frequently at Stanford Shopping Center (Apple, Victoria Secret, ...) but also in stand-alone stores. These seem to have the same underlying elements.

I voted for Prop. 47. Now I would vote to repeal it. As the police chief says, it isn't down and out people any more. It's a business model based on Prop. 47's exact provisions. You can say, idealistically, that we value lives over mere property. But now we're attracting crews and an overall level of property crime that makes it qualitatively different. Social order and a sense of safety on the part of citizens means a lot. I didn't value that enough until we lost it.

Report Objectionable Content
Email Town Square Moderator
3 people like this
Posted by Tecsi
a resident of Los Altos Hills
on Mar 13, 2020 at 1:18 pm

Users & sellers should be prosecuted/incarcerated to the harshest extent of a NEW LAW implemented to get these kinds of individuals off the streets. They contribute NADA to the betterment of society.

Report Objectionable Content
Email Town Square Moderator
9 people like this
Posted by What Will They Do Next
a resident of Old Palo Alto
on Mar 13, 2020 at 3:37 pm

Report Objectionable Content
Email Town Square Moderator
1 person likes this
Posted by Midtown Local
a resident of Midtown
on Mar 15, 2020 at 9:00 am

I'm not sure I get it. On the one hand, I've read that Prop 47 allows for a year in jail for property crimes. That may not be as severe as before Prop 47, but surely it'd be a deterrent if we were doing that. Yet the chief says we're releasing the perps after a day or two. Why? Why not prosecute to the extent that Prop 47 allows?

Interesting point from Midtown Local. I wonder if the time to prosecute just one of these might be too costly?

First, remember that most (90%++?) of these break-ins don’t lead to the culprit. So if we never catch them, what do we do?

Which drugs (meth, cocaine, heroin, marijuana, ...) would you jail people for, and for how long? What would you expect to happen with them after they are released?


Report Objectionable Content
Email Town Square Moderator
2 people like this
Posted by Lockdown & Throw Away The Keys
a resident of Portola Valley
on Mar 16, 2020 at 9:31 am

> Which drugs (meth, cocaine, heroin, marijuana, ...) would you jail people for, and for how long? What would you expect to happen with them after they are released?

^^^ I suspect that the predominant number of residential burglaries & auto break-ins are done by out of town or homeless meth addicts.

They almost ALWAYS return to their meth addictions because of the drug's allure.

Locking them up indefinitely (in an institution/ward) would probably solve the problem.

A Pragmatic Approach to A Trillion Trees
By Sherry Listgarten | 1 comment | 3,300 views

Repairing a Disagreement with your Beloved & “Physical” vs. “Social” Distancing
By Chandrama Anderson | 1 comment | 2,097 views