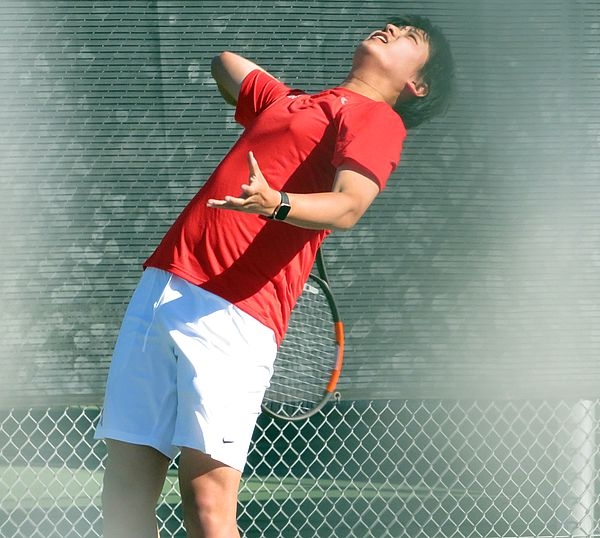 Ray Kawai serving up a winner for the Titans. 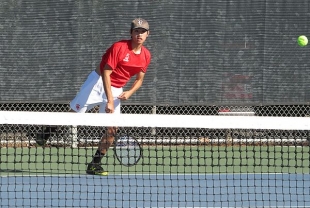 Evan Huynh hits a solid return in his win at No. 3 singles.

Gunn senior Ray Kawai has played a lot of tennis over the past 12 years, though it wasn't until this season that he ever played for a school team. He's happy he's getting the chance, even if the season is all but over before it had a chance to start.

"There's a lot of confusion here," Kawai said after beating David Sung, 6-0, 6-0, to help the Titans clinch a 6-1 victory over host Homestead in a Santa Clara Valley Athletic League match Thursday. "At least I know the team will still practice and I'll get to have fun with good teammates. I love my teammates."

The decision is in line with the rest of the sporting world, including the San Mateo and Sequoia Union High School Districts and most of the private schools in the area.

"I wanted to play for my school for the first -- and last -- time," said Kawai, a 2-star recruit while living in Houston, where he was a regular on the junior tennis circuit and was part of a state club championship team. "I used to play a lot as an individual. I stopped playing tournaments in my junior year. I just want to play my best for the team."

The Titans (6-0, 5-0) took the news in stride and certainly expected something like it to happen. Gunn coach Jim Gorman wasn't too concerned, even though he may have his best team in quite a while.

"We returned our top singles players from last year and added two good singles players," he said, referring to Kawai and freshman Raghav Jangbahadur, who plays No. 1 singles for Gunn.

Jangbahadur has proven himself in junior tennis over the years. The 14-year-old has played 18-under and 16-under tournaments and fared well. As a 12-year-old, Jangbahadur reached the final of the Easter Bowl in his age bracket. At the most recent national Clay Court Championships, he reached the fifth round of the consolation singles.

"It sucks that play gets suspended," Jangbahadur said after beating Samath Dev, 6-1, 6-1. "But the most important thing is staying healthy. We'll be fine. We'll keep coming out to practice."

Jangbahadur, who also belongs to the Foothills Tennis and Swimming Club, just up the road from Gunn, gets help from Foothills tennis director Mariano Parris. "So I play as much as I can there," he said.

Several tennis rating services have Jangbahadur ranked as a five-star recruit and he's been ranked among the top 30 prospects in the nation, even though he won't be graduating until 2023.

He's also playing school tennis for the first time and is thoroughly enjoying it.

"It's great to be in a team environment and playing for something bigger than yourself," Jangbahadur said. "When you're playing tournaments, you're usually alone and it's a different atmosphere."

The No. 1 doubles team of Ishan Balakrishnan and Leo Naddell were the last on the court and although the Titans had long since clinched the victory, the rest of the team, including extra players, gathered together to cheer them on.

They lost, in a tie-breaker, but it did nothing to dampen a joyous mood. Players lingered around, checking the latest athletic updates. There wasn't a hint of sadness at losing at least part of the season.

"There are great people," Gorman said. "We have guys who played singles last year and are playing doubles now. Our doubles have always been a strength and now we have singles players too."

It's been a while, Gorman said, since Gunn has beaten Homestead 6-1 or 7-0. The Titans also own a 7-0 win over Monta Vista, another perennial tennis powerhouse in a league full of them.

The No. 2 doubles team of Colin Chan and Bruno Naddell, who used to play doubles with his twin Leo, were also one of the first off the courts after winning 6-2, 6-2.

Kudos to Gunn for having an undefeated season for the first time since 1978.
Gunn had nine or ten undefeated squads in a row establishing a national record of 200 consecutive victories.
Three players from those teams, Nick Saviano, Matt Mitchell and Chip Hooper reached top 70 in the world professionally. Hooper went to #17 in the world, despite being only #4 on his Gunn team.
Maybe 40 years from now people will be reciting Kawai, Jangbahadur and Huynh as their Titans of tennis pantheon.

Singapore's oldest cafe was about to open in Palo Alto. Then, the coronavirus hit.
By Elena Kadvany | 3 comments | 6,644 views

A Pragmatic Approach to A Trillion Trees
By Sherry Listgarten | 4 comments | 4,267 views

Repairing a Disagreement with your Beloved & “Physical” vs. “Social” Distancing
By Chandrama Anderson | 2 comments | 2,971 views