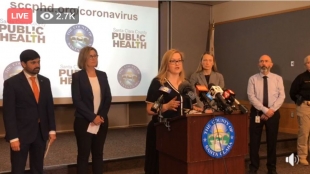 In an attempt to slow down community spread of the new coronavirus, Santa Clara County’s chief health officer, Dr. Sara Cody, on Friday morning issued a legal directive banning gatherings of more than 100 people and put a conditional moratorium on smaller gatherings.

Under the conditional moratorium, residents should immediately cancel or postpone all events of 35 to 100 people. If a gathering is necessary for essential societal functions, the county has a strict set of guidelines to follow. The order includes gatherings in any room or space, including conference rooms, cafes, bars, restaurants and other locations, including even those outdoors. The order has updated guidance for businesses.

The situation is rapidly evolving and county leaders are taking these actions based on the most recent medical updates and to protect the community, she said.

At the same press conference, she announced the mandatory closure of all public schools in the county for three weeks.

"These are tough decisions and we have to make them quickly. … I know it will have a big impact on our community and our families," she said.

The county currently has 79 confirmed cases of COVID-19 with 37 of the patients hospitalized. Of the total cases, 43 were community transmitted, meaning they spread from an unknown source, presumably from person to person. The number of confirmed cases is 36 more than was reported on Monday and represents a three-fold increase in the past week, she said.

"We anticipate many, many more cases in the days and weeks to come," Cody said.

Santa Clara County has the most cases in any California county, more than a quarter of the state’s 277 cases as of March 13.

Although laboratory testing for the virus started slowly due to a shortage of testing kits from the U.S. Centers for Disease Control, Cody said the number of tests being done is significantly increasing because of the involvement of commercial, state and hospital laboratories, although she didn’t have an exact number.

County public health laboratories are not designed to handle general testing and are set up as reference laboratories with small capacity -- Cody has said previously that the Santa Clara County lab can test 30 to 40 cases a day -- but more laboratories through the state and commercial facilities are now set to test many more people. (Gov. Gavin Newsom said on Thursday that those numbers will be in the many thousands by next week.)

Cody said four TSA agents at San Jose International Airport have tested positive for the virus. Because the agents were in positions that put them in contact with many people passing through, the positive tests are to be expected.

County Superintendent of Schools Mary Ann Dewan said schools would be closed from March 16 through April 3.

County Board of Supervisors Chairwoman Cindy Chavez said the county has a network of funding for people at risk of losing their homes due to wage loss associated with COVID-19 and is looking at expanding their resources.

County Executive Jeff Smith said the county has just purchased a couple of hotels and is looking at other properties where they can isolate homeless individuals who test positive for the virus. Teams of nurses and psychologists are in contact with homeless encampments seeking anyone who might have symptoms of the illness. Thus far, no homeless person has been quarantined, he said.

Sheriff Laurie Smith said that two inmates at the county jail were exposed to a person who later tested positive for COVID-19 and had visited the jail to interview them. The inmates have been isolated and are being monitored, she said.

Chavez, who said she is in the high-risk category of people who would become highly ill from COVID-19, said that the pandemic "will require us to work together as we never have done. Let’s look out for each other."

The crisis, while frightening, also offers opportunities for "deeper, more meaningful collaborations," such as people getting to know their neighbors on their block, Chavez said. She urged residents to work together and to especially offer aid to neighbors who are in high-risk categories, such as seniors and those with chronic medical conditions.

Information on the new guidelines can be found on the county public health department’s website here. translations are also posted in Chinese, Spanish and Vietnamese.

Find comprehensive coverage on the Midpeninsula's response to the new coronavirus by Palo Alto Online, the Mountain View Voice and Almanac here.

Does "gathering of 100 people" include regular business hours at restaurants or only special events? Are restaurants required to maintain 6 feet of space between tables at all times?

Like this comment
Posted by Resident
a resident of Another Palo Alto neighborhood
on Mar 13, 2020 at 3:24 pm

Will someone count the number of people in the libraries? Will they be kept below 100?

2 people like this
Posted by Precautions Abound
a resident of Community Center
on Mar 13, 2020 at 3:29 pm

A lot of panic buying going on in the grocery stores + most restaurants are empty at prime dining hours.

People are staying home until this thing subsides.

Even church services will suffer the consequences of COVID-19.

Libraries are all closed thru the end of April:

A Pragmatic Approach to A Trillion Trees
By Sherry Listgarten | 1 comment | 3,252 views

The University of California’s flexible policies during COVID-19
By John Raftrey and Lori McCormick | 6 comments | 2,272 views

Repairing a Disagreement with your Beloved & “Physical” vs. “Social” Distancing
By Chandrama Anderson | 1 comment | 2,060 views