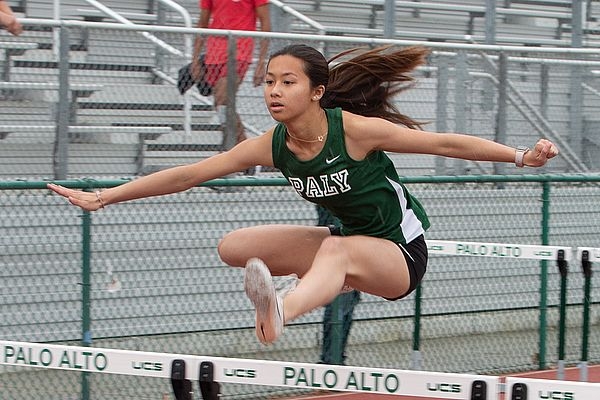 Ariel Le had a solid all-around performance in the hurdles and 100 meters. Photo by Malcolm Slaney. 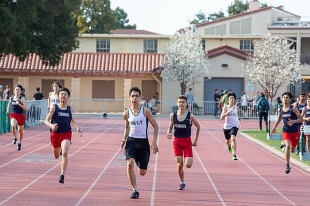 Rishi Tella and David Evans were the top performers for the Palo Alto boys track and field team in a 72-50 loss to Lynbrook on Tuesday.

Paly’s Max Pearson won the high jump, clearing 6-0. Ras Kebebew and Aaron Kim finished second and third, respectively. Jeremy Huang was second to Tella in the long jump with a 19-2 and second in both the 110 hurdles and 300 hurdles.

Patrick Crowley was second in the shot put and third in the discus.

Senior Max Reyes posted a sterling two-under 34 with 3 birdies to lead the Bears to a 202-250 victory over Woodside at Sharon Heights Golf and Country Club on Tuesday.

Daysii Phills, Emmeline Brenner and Bella Ramón also scored for the Gators (0-3-1), who travel to play Crystal Springs Uplands at 4 p.m. at 4 p.m.

Andrew Wiseman stepped up as the Bears setter to guide them to the victory.

Senior Cameron Smith and Danitz controlled the net play with several blocks, and senior Ian Reis had a big spike for the Bears.

The Dons won set three and took an early led in the fourth set. The Bears eventually tied it at 17-17 and then took over.

With Dunlevie serving, the Bears ran off five straight points, topped off by a powerful spike by senior Hayden Bradley to close out the game 25-18 and end the match.

The Bears (2-1) face a critical test on Friday at league-leading PAL rival Carlmont.

The Paly track team worked hard against tough competition. Thank you for the coverage here. Love seeing the pictures!

Good coverage! Is there a link to the track results?

A Pragmatic Approach to A Trillion Trees
By Sherry Listgarten | 1 comment | 3,245 views

The University of California’s flexible policies during COVID-19
By John Raftrey and Lori McCormick | 6 comments | 2,269 views

Repairing a Disagreement with your Beloved & “Physical” vs. “Social” Distancing
By Chandrama Anderson | 1 comment | 2,052 views