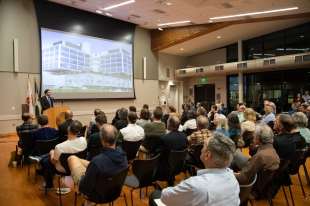 Mayor Adrian Fine addresses the crowd at his "State of the City" address at Mitchell Park Community Center in Palo Alto on March 4. On March 9, the city announced it has canceled events expected to bring more than 100 people through the end of the month. Photo by Magali Gauthier.

The grand opening of a new fire station. A sustainability workshop. A town hall to discuss new designs for the rail corridor.

These events in Palo Alto, as well as dozens of others scheduled for what was shaping up to be busy March at City Hall, will now be postponed, modified or, in many cases, scrapped altogether as part of the city's response to the new coronavirus' spread. Palo Alto officials announced Monday evening that it is modifying or canceling more than 30 events to limit the spread of respiratory viruses and protect residents at the highest risk of catching the virus that causes COVID-19.

So far, the city has been considering only events extending to March 31. But as the virus continues to spread, the announcement noted that the city may expand the time period of its "cancellation approach" at any time. While City Council meetings, as well as those of local boards and commissions, will proceed as scheduled, the city will be canceling all events with an estimated attendance of more than 100 people or those whose attendance is unknown but that may draw a larger attendance, according to an announcement from City Manager Ed Shikada's office.

So far, the list of canceled or postponed city events covers several departments:

• The Expanded Community Advisory Panel for grade separation not meet on March 11, as originally scheduled (see list below for future meetings and locations)

• Rail Town Hall meetings, which were scheduled for March 12 at Palo Alto High School and March 26 at Elks Lodge.

• Document shredding event, scheduled for March 14 at the SMaRT Station in Sunnyvale.

• Palo Alto Masters Meet, which was set for March 14 at Rinconada Pool. Pool operator Team Sheeper also announced a one-day closure of the pool on Thursday, March 12, so staff could evaluate how to keep patrons safe.

• The Art Center Foundation Member Day Trip to Sacramento, which was scheduled for March 14.

• Landscape Design 101: How to Get Started, a class that was scheduled for March 14 at Mitchell Park Library.

• Arbor Day Festival, which was scheduled for March 15 at the Palo Alto Art Center.

• "Word on the Street" transportation talk, which was scheduled for March 19 at JLS Middle School.

• Fire Station 3 grand opening and open house, which was scheduled for March 21.

• Racing Hearts 5K/10K Race, which was scheduled for March 29 but was canceled by the event organizer.

• Sustainability Community Workshop, which was scheduled for March 31 at Mitchell Park Community Center.

A complete list is available here. This list will be updated as the city sends more announcement on changes.

The city also announced that several events and programs will be adjusted with revised locations or reductions in ticket numbers, in line with Santa Clara County Public Health Department guidance on social distancing:

Find comprehensive coverage on the Midpeninsula's response to the new coronavirus by the Almanac, Mountain View Voice and Palo Alto Online here.

Restaurants and movie theaters often have more than 100 customers at a time. What are they doing to prevent the spread of the virus?

Good thing the library is still open. It's the best place to have children, the homeless, and the general public to comingle by the hundreds.

But we cant chance that 20 people at a fire department might shake hands.

1 person likes this
Posted by Resident
a resident of Another Palo Alto neighborhood
on Mar 10, 2020 at 1:49 pm

A Pragmatic Approach to A Trillion Trees
By Sherry Listgarten | 1 comment | 3,281 views

The University of California’s flexible policies during COVID-19
By John Raftrey and Lori McCormick | 6 comments | 2,293 views

Repairing a Disagreement with your Beloved & “Physical” vs. “Social” Distancing
By Chandrama Anderson | 1 comment | 2,079 views