Two volunteers, one dog and the story of the Palo Alto couple's unlikely rescue

'We weren't expecting somebody to yell for help,' said the K9 handler 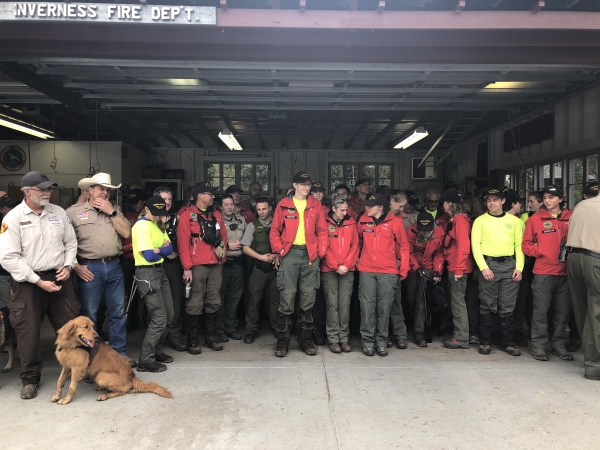 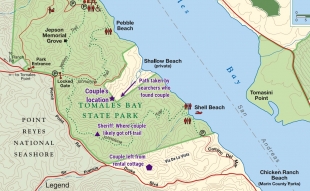 Carol Kiparsky and Ian Irwin, who went missing from their rental cottage in Inverness on Feb. 14, were found alive eight days later in the wilderness of Tomales Bay State Park by a pair of volunteer rescuers. Map base courtesy California Department of Parks and Recreation.

On the eighth day of Carol Kiparsky and Ian Irwin's disappearance, Rich Cassens came to the town of Inverness near Point Reyes Station with a very specific task.

"I'm a K9 handler," said Cassens, of the California Rescue Dog Association. "I was called in because my dog is certified in locating human remains."

It was Saturday, Feb. 22, and a plethora of agencies — from the Marin County Sheriff's Office to the U.S. Coast Guard — had already scoured the small community along Tomales Bay by air, ground and water with every resource they had, including drones, K9s and boats. The missing Palo Alto couple had inexplicably vanished on Feb. 14, and by Saturday, hopes had dimmed for their rescue.

Still, 70 Marin County Sheriff's Office Search and Rescue team members gathered at the Inverness Fire Department that morning to provide any means of closure they could find for the Kiparsky and Irwin families.

"We weren't expecting to see them alive, but everyone kept their hopes up," said Quincy Webster, 18, a search and rescue volunteer and a senior at Redwood High School in Larkspur. "Even if it was going to be a recovery mission, we wanted to find them."

Webster and Cassens were paired together that day, along with Cassens' sprightly 3-year-old golden retriever and search dog, Groot. They were tasked to comb a drainage area starting from Shallow Beach, a nearly 3-mile drive from the couple's rental cottage on Via De La Vista. There was no good rationale behind the assigned location. All the "high priority areas" had already been canvassed, according to Cassens. They were looking anywhere else that could possibly be searched.

"I would do my best, like all the other searchers," Cassens said. "I'd hit the drainage as hard as I could and search as much of it as I could."

The volunteers started at the beach and, right off the bat, had to slog through a mud bog, which Webster sunk into up to his knees and which painted Groot with thick mud. After a fruitless search, the team continued to follow the drainage and stopped momentarily when confronted by a "wall of trees," Webster said. There was no trail — just a dense forest of coyote brush, thorny vines, down trees and poison oak.

"If it was clear, it would have been a 30-minute walk and we'd be done, but there was no way that was gonna happen with this density of the brush," Cassens said.

Instead, Cassens and Webster had to bushwhack their way through the thicket, using only their gloved hands and bodies. Then, after about an hour and a half of maneuvering through foliage, they heard voices.

"We looked at each other and thought, 'That's kind of odd.' We weren't expecting somebody to be yelling for help," Cassens said.

"I thought maybe it was another team," Webster said. "Maybe it was someone else who got lost. They just sounded so alive and well."

Immediately, Cassens signaled Groot to follow the voice, and without any consideration of a careful route, the volunteers hurriedly forced their way through the vegetation.

"In my mind it was just: 'I think we found them,' 'Get down there and see what kind of condition they're in,' 'Get them out of there' — and adrenaline," Cassens said. "Once we knew somebody was there, we needed to get to them and worry about picking a good route later."

When the search team finally reached Irwin and Kiparsky, the couple was elated and shocked with disbelief.

"As soon as they saw us, you could see their spirits were lifted and they asked, 'Are you really real?'" Cassens said. "We assured them that we were."

Physically, they were beaten up, he recalled. Their hands and feet were cut from the brush they had crawled through, as they later told their sons. At a press conference, hours after the couple was found, Sgt. Brenton Schneider recounted that Irwin had lost a hearing aid and his glasses, while Kiparsky had lost her shoes. The pair had survived on nothing but puddle water and wild fern fronds.

To strengthen the couple, Cassens and Webster gave them a jacket, a 32 ounce bottle of water, Gatorade and a few energy bars. From there, Webster, who was tasked with communications, climbed about 60 feet up the hill to try to get a signal on his radio and contact the nearest search-and-rescue team.

"They asked what 'plan' it was," Webster recalled, referring to the codes Plan A and Plan B, meaning "Dead or alive?" Stunned just as much as Webster and Cassens when Webster said "Plan B," search and rescue members asked him multiple times to confirm that it was in fact the couple and they were in fact alive.

The Henry 1 helicopter from the Sonoma County Sheriff's Office was called in to extract the couple. Irwin was loaded onto a litter first and flown about a half-mile to Pierce Point Road, where he was attended to by paramedics. Kiparsky followed, leaving an ecstatic group of search volunteers on the ground as she was airlifted out. Irwin and Kiparsky were rushed in an ambulance to Marin General Hospital, about 30 miles away.

"This is in a class of its own. I've never been in something quite as big as this," said a tired but satisfied Webster, who had helped look for the couple on Sunday and Monday and also attended an all-day recertification program for the search and rescue team on Friday.

Cassens agreed: "Especially when nobody was expecting to find them alive, much less in such good condition. This one's gonna stick with me for a long time — forever."

Magnificent effort by the rescuers! So grateful Carol and Ian are alive.

Terrific story and wonderful outcome! One thing: Editors, it's bushwhack.

Report Objectionable Content
Email Town Square Moderator
25 people like this
Posted by Blessings
a resident of Another Palo Alto neighborhood
on Feb 25, 2020 at 12:21 pm

When we help each other, we accomplish great things.

Thanks to all the folks who never gave up. You are real heroes.

Report Objectionable Content
Email Town Square Moderator
11 people like this
Posted by James
a resident of Professorville
on Feb 25, 2020 at 1:20 pm

I’m happy they were found alive and are going to be ok, but they need to take a huge portion of blame for putting themselves in this awful situation. No cell or water. Starting off on a hike just before dark, in a unfamiliar area.

Report Objectionable Content
Email Town Square Moderator
15 people like this
Posted by Glad
a resident of Barron Park
on Feb 25, 2020 at 2:23 pm

@James,
The earlier story said they were just stepping out to watch the sunset and got lost, they were not taking a hike. I think it's more a cautionary tale of the need for extra vigilance in urban wildland areas and around AirBnB's.

What a wonderful ending to the efforts of so many. Thanks so all the searchers!

The story says they used drones. I'm wondering -- you know those drone events at stadiums where there are tons of drones working in tandem? I wonder if they could be employed for search and rescue in a way that blankets large areas and sweeps across them, "calling" and listening for responses?

Rescues like this are made possible by highly trained unpaid volunteers. You can help support the people that train and handle search dogs by donating to CARDA. This is a donation you can really feel good about! www.carda.org

@Glad I'm guessing this is right -- they just popped out to see the sunset, then the forest made it darker than expected -- panic to get back and instead hopelessly lost. It's easy to say "just stay on the trail and overnight it dancing in the cold", but no one would want to do that.

I'm not even sure there's some foolproof way of preventing such accidents. It's not like every time you go outside in the woods you bring survival gear. Maybe wear a compass/whistle thing around your neck from REI day and night.

It's not mentioned, but I'm speculating that one reason they're alive is probably "micro-climates". They were in a drainage to Tomales Bay. The bay is very shallow and so stays fairly warm. That heat rises up the canyon ridges at night. It might have been as much as 10 degrees warmer in the canyon as on the ridge in the night.

The tech solution to search could definitely be arrays of drones each armed with AI cameras, thermal cameras and directional microphones.

Can you stay healthy without making more trash?
By Sherry Listgarten | 6 comments | 3,073 views

Think about helping others in our coronavirus-affected area
By Diana Diamond | 7 comments | 2,809 views

The University of California’s flexible policies during COVID-19
By John Raftrey and Lori McCormick | 5 comments | 1,154 views