Dragged by the neck, woman escapes from man accused of nearly kidnapping her 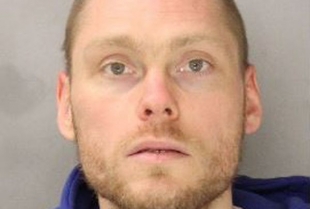 Jeremiah Porter, 33, who allegedly grabbed a woman by her neck and attempted to force her into her car in Mountain View on Feb. 17 was arrested. Image courtesy Mountain View police.

A man who allegedly burst into a Mountain View home near the Palo Alto border Monday night and tried to drag a woman by the neck out to her car was arrested hours later, according to Mountain View police.

Police said the 33-year-old man fled the scene, but was found several hours later standing on top of a carport in the same area. Officers used a fire department ladder to bring down the suspect, identified as Jeremiah Porter, who was then arrested on suspicion of kidnapping.

According to the victim, Porter repeatedly rang the doorbell of her home on Montelena Court, located in the San Antonio neighborhood near the Palo Alto border, around 10:30 p.m. When the 53-year-old woman answered the door, Porter allegedly grabbed her by the neck and said he needed to flee the area.

Porter reportedly tried to force the victim to get into her car, but she was able to break free and run to a neighbor's home, police said.

Nearly five hours later, police received reports of a man who was throwing rocks at windows and yelling on the 2700 block of Del Medio Court, a short distance from the Montelena Court home. After Porter was arrested, the victim identified him as the man who attacked her.

Porter was arrested on suspicion of robbery and attempted kidnapping charges. He is being held in Santa Clara County jail.

Police said Porter likely had contact with other residents in the area. Anyone who may have seen Porter between late Friday night through Tuesday morning is asked to contact Officer Bobby Taylor at robert.taylor@mountainview.gov.

Great that this woman was able to break free and run to a neighbor.

I have said it dozens of times when teaching self-defense, based on what I have heard from many police officers and other crime experts over the years and what little there are for actual statistics: Things almost always get much worse if you go with someone who is trying to take you somewhere by force to a secondary location. At least one former police officer I know suggests that your chances of survival are better jumping out of a moving vehicle onto the street than going with the criminal.

This woman is most likely MUCH better off for having escaped. As I have told thousands of people in this area taking self-defense classes from me, unless you need to stay to protect someone else, try to get away!

And thank you MVPD for arresting the attacker.

Report Objectionable Content
Email Town Square Moderator
16 people like this
Posted by musical
a resident of Palo Verde
on Feb 18, 2020 at 4:35 pm

Hope we get another headline when he is released.

Report Objectionable Content
Email Town Square Moderator
20 people like this
Posted by Californian
a resident of Another Palo Alto neighborhood
on Feb 18, 2020 at 5:30 pm

To the people who want to keep urbanizing, increased crime comes with the territory. Is that what we want? Is it really necessary? The world is only getting more crowded, and people need more housing, and they need jobs where the housing is. Isn't it time we pushed for a few new planned towns/cities, working with tech to help pay for it? What they want comes at too high a price if we don't increase the number of places they can concentrate and attract their workers.

Report Objectionable Content
Email Town Square Moderator
17 people like this
Posted by Resident 1-Adobe Meadows
a resident of Adobe-Meadow
on Feb 18, 2020 at 9:28 pm

So we are now seeing articles about one a week on illegal, abusive behavior by gangs at SU, individuals assaulting women and men, car break-ins. And we are suppose to be a safe, college town in a high end zip code. I think we have reached the tipping point here where it all was good and safe and is now problematical about going out at night - will your car still be there? Will someone assault you in the downtown garage because you are interrupting a car break-in? If you can see the trend in actual, recordable events then we need a city plan as to how it is going to upgrade what every action and policy is required to stop this permissive legal situation which is emboldening bad behavior.

Report Objectionable Content
Email Town Square Moderator
2 people like this
Posted by No brainer
a resident of Menlo Park
on Feb 18, 2020 at 10:38 pm

Report Objectionable Content
Email Town Square Moderator
2 people like this
Posted by @No brainer
a resident of Mountain View
on Feb 18, 2020 at 10:58 pm

Report Objectionable Content
Email Town Square Moderator
13 people like this
Posted by Lauren
a resident of Fairmeadow
on Feb 19, 2020 at 6:59 am

Can you stay healthy without making more trash?
By Sherry Listgarten | 6 comments | 3,065 views

The University of California’s flexible policies during COVID-19
By John Raftrey and Lori McCormick | 5 comments | 1,140 views