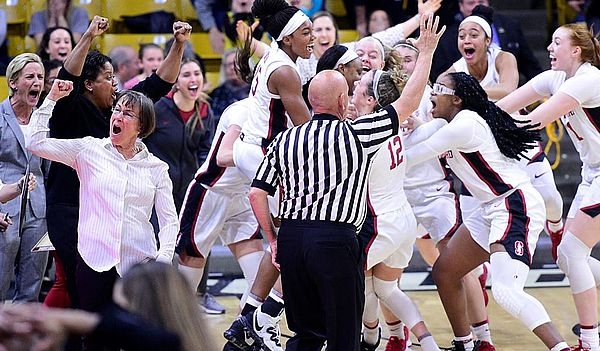 Junior guard Kiana Williams was already one of the more popular Stanford women’s basketball players; just think what 13 seconds in Boulder did for her reputation.

Williams scored a career-high 29 points, including a pair of reality-defying 3-pointers in the closing seconds, to lift No. 8 Stanford past host Colorado 69-66 in one of the more unlikely comebacks in the Pac-12 Conference this season.

Kiana Williams/ Stanford Athletics
Nadia Fingall added 13 points and six rebounds for the Cardinal (23-3, 12-2), which remained in second place, a game behind Oregon with a home game against Oregon State coming up at 8 p.m. Friday. The Ducks come to town next Monday night.

Colorado took a 64-59 lead with 3:06 remaining to play in the contest and then missed three 3-pointers, turned the ball over twice and went 2-of-6 from the foul line the rest of the way, giving Stanford the chance to pull off the remarkable victory.

Williams and Fingall each hit layups to pull within 64-63 heading into the final minute of play.

The Buffaloes, who lost at Stanford in overtime earlier in the season, went 2-of-4 on the foul line to pull ahead 66-63.

A missed 3-pointer and Colorado rebound forced the Cardinal to foul again. This time, the Buffaloes missed both free throws and Ashten Prechtel grabbed the rebound, setting up the unlikely finish.

Following a time out, Lexie Hull took the inbound pass and drove toward the basket. As she was flying out of bound, she somehow got the ball to Williams in the corner for the game-tying shot.

Colorado had 13 seconds to create a scoring opportunity but a player was trapped near half-court and Williams stepped in to force a bad pass, picked it off, dribbled a few steps and then let loose a 40-foot shot from in front of the Stanford bench that handed the win to the Cardinal.

"We practice that a million times in practice, but I would say there was a little pressure," Williams said. "Thank God both those shots went in."

Williams, who was 11 of 19 from the field, including 7 of 13 from long range, was immediately mobbed by teammates as the officials went to a replay to confirm the shot.

Hull had team highs in rebounds (7) and assists (6) while Maya Dodson added six points and a key rebound in her second game since returning from injury.

Stanford extended its winning streak against Colorado to 16 games.

Incredible comeback saw me literally jump off the sofa into the air. Kiana was simply amazing all game.

I'd been feeling so sorry for Lexie, having such a frustrating shooting outing, so it was good to be reminded of her rebounds and assists and of the role she'd played in the basket that tied the game. Don't know when I've seen such a thrilling game. Best of luck the next two weeks!!!

The University of California’s flexible policies during COVID-19
By John Raftrey and Lori McCormick | 6 comments | 1,455 views