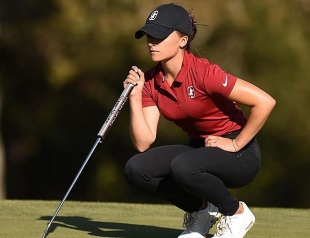 Aline Krauter improved her score by eight strokes from Sunday to Monday and moved into 13th place from 48th. Photo by Cody Glenn/ISIPhotos.com.

Sophomore Aline Krauter moved into 13th place from 48th following 27 holes of golf at the IJGA Collegiate Invitational in Guadalajara on Monday but Stanford fell into seventh place with nine holes remaining on Tuesday.

Krauter improved eight strokes from Sunday to Monday, shooting a second round 4-under 68. She’s currently at even par through half of the third round.

Angelina Ye/Stanford Athletics
Angelina Ye fired a 2-under 70, with three birdies on back nine. Brooke Seay followed her first round of 2-under with a 4-over 76 and is at 2-over midway through the final round.

Calista Reyes is at 3-over through nine holes of the third round and Ziyi Wang had three birdies on the day.

Mika Liu, playing as an individual, also improved eight strokes from Sunday to Monday, firing a 1-under second round. She’s even through nine holes of the third round.

Stanford finished the second round in third place but is currently tied for seventh with nine holes remaining.

Following its trip to Mexico, the Cardinal has over a month to prepare for the ASU Invitational in Tempe. The tournament is slated to begin March 27.

Can you stay healthy without making more trash?
By Sherry Listgarten | 7 comments | 3,216 views

Think about helping others in our coronavirus-affected area
By Diana Diamond | 7 comments | 2,925 views

The University of California’s flexible policies during COVID-19
By John Raftrey and Lori McCormick | 6 comments | 1,482 views