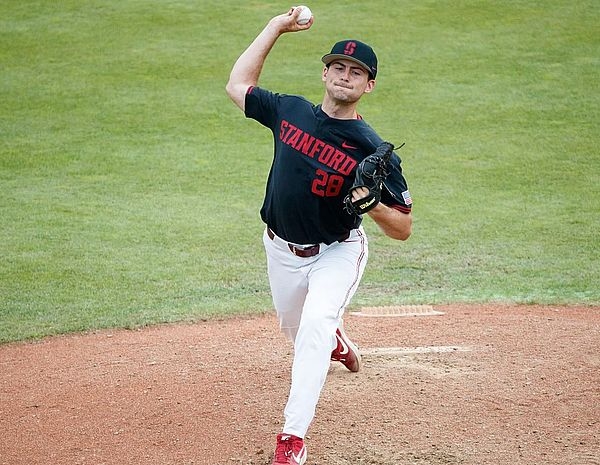 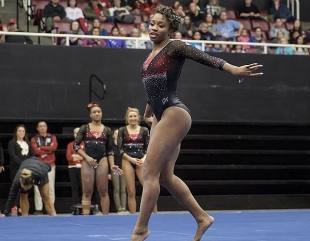 Kyla Bryant scored a career-high 9.950 on the floor. Photo by Karen Ambrose Hickey/StanfordPhoto.com.

Nick Bellafronto hit a sacrifice fly in the fourth inning to drive in the go-ahead run for the Cardinal (1-2), which visits Santa Clara for a 6 p.m. nonconference Tuesday.

Williams walked one and struck out three in his outing. Cody Jensen pitched the final two innings for the save.

Stanford took a 1-0 lead on an unearned run in the first inning. Tim Tawa singled with two outs and came around to score when Nick Brueser’s fly ball was dropped.

After the Titans tied the score in the second, the Cardinal scored another unearned run in the fourth.

Brueser reached on an error, went to third on a single from Christian Robinson and scored on Bellafronto’s fly ball.

"It's been a really tough three-week stretch and we have faced a lot of adversity," said Cardinal coach Tabitha Yim. "I thought closing out that three-week cycle with this meet was a huge confidence booster for our team. We're looking forward to the upcoming road stretch and continuing to build our confidence. Grace really stepped up on bars and the floor rotation was electric at the end. The biggest things we can improve upon are a having little more confidence and big hits on each of the events over the next few weeks."

Following a 48.950 on vault, Stanford moved to bars, where Grace Garcia's career-high 9.900 proved to be the highlight. The Cardinal then received a career-best effort from Lawson on beam, delivering a 9.875.

The Cardinal meets No. 1 Oklahoma on Friday as part of the Perfect 10 Challenge before visiting No. 22 Arizona two days later.

No. 3 Shane Griffith was the lone Cardinal to register a win as No. 13 Stanford fell 34-4 at host No. 25 South Dakota State on Sunday in Frost Arena.

Griffith, who wrestled in the final match of the dual, registered a 16-5 major decision over Kenny O’Neil. The redshirt freshman is 26-0 on the season and finished the year 13-0 in duals.

Up next, Stanford hosts the Pac-12 Championships on Saturday, March 7 in Maples Pavilion.

The Cardinal is the defending conference champion, capturing the first team title in school history.

The University of California’s flexible policies during COVID-19
By John Raftrey and Lori McCormick | 6 comments | 1,453 views