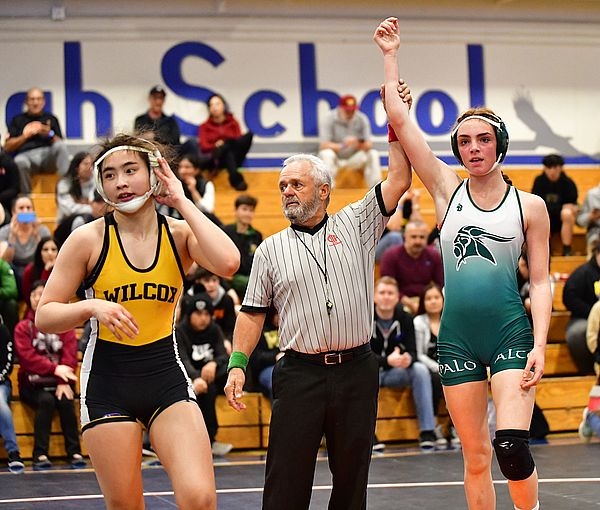 Ella Jauregui was crowned champion at 121. Photo by Keith Ferrell. 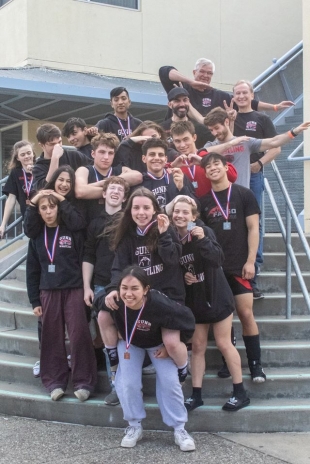 This is the first year the girls league tournament is a qualifier for the Central Coast Section tournament, which gets underway at 6 p.m. Friday at San Jose's Independence High. In past years, the CCS girls tournament was often held before league finals.

That's why a league title means more this season than ever before.

"Our goal was to develop team chemistry," said Lee, who pinned her opponent in 2:45 at 131. "We were excited coming in about trying to win the title."

Lee wrestled against a whole new cast of characters after competing at 126 most of the season. To win a CCS title, she'll likely have to wrestle Menlo-Atherton's Anna Smith.

"I lost to her early in the season," Lee said. "I've improved a lot since then."

Lee qualified for the state tournament last year and won a match. She's hoping to get a chane to improve on that.

Jauregui, who beat her opponent 10-4 at 121, went 4-2 at last year's CCS tournament, losing in the blood round, which is so close to placing and earning a trip to state as you can get without actually doing so.

"I'm hoping to make it to state and I'm going to work hard this week," Jauregui said. "Hopefully I can place at state. I'm still looking at it one match at a time and I'm always looking to improve."

Gunn's Beanie Jose won her third-place match with a pin at 1:44.

In several other divisions, a round-robin was held to determine individual titles. That's how Silverman won at 150. Gunn's Erica Norton (101) and Jelena Hertzler (106) each placed second while Emma Grant-Bier (111) and Allyson Dinh (126) were fourth. Marianna Smith lost the fifth-place match at 116.

Sadly many the brackets were pretty skimpy as to participants
for most of the SCVAL...
But was obvious from the Paly Girls and many other SCVAL
girl wrestlers, they put in a lot of hard work all season towards
their wrestling skills and technique.
Congrats to the Paly wrestling staff as well.
FIRST PLACE!!!!!!!!!!!!! Outstanding and big step for Paly...
Go Vikings.
III

Although it was merely glossed over, Mikayla Silverman of Gunn defeated the previous #1 seed in CCS in a major upset to win 1st place and goes into CCS with a #1 pre-seed ranking. There are 2 high schools in Palo Alto, and although Paly happens to be the more dominant wrestling program right now, as Gunn has struggled with long-term coaching staff recently, let's celebrate everyone's achievements. Good luck to all of the Gunn and Paly wrestlers (male and female) at CCS.

Think about helping others in our coronavirus-affected area
By Diana Diamond | 7 comments | 2,911 views

The University of California’s flexible policies during COVID-19
By John Raftrey and Lori McCormick | 6 comments | 1,465 views