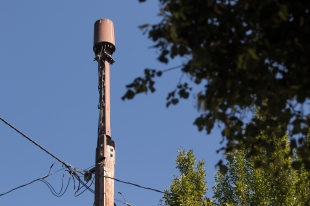 In the latest Around Town column, news about the latest arguments for and against installing wireless antennas in Palo Alto, a local group celebrating its centennial and a firefighter who completed a 625-mile journey to San Diego.

COMMUNICATION BREAKDOWN ... Palo Alto's planning commissioners received mixed signals on Wednesday as they considered the latest overhaul for the city's rules on wireless communication facilities. On one side were the telecom companies, whose representatives claimed that the latest rule changes are too onerous and legally dubious. "We don't think this code is enforceable," said attorney Paul Albritton, who is representing Verizon. He referred to the changes that the City Council endorsed last December, which prohibit wireless equipment within 600 feet of public schools and within 20 feet of any building. The new rules also give preference to commercial districts by requiring telecoms to seek an "exception" for installing equipment in residential areas. "This is just far beyond what can be required for placing facilities in the public right of way," Albritton said. He also argued that there is no legal justification for creating a setback near schools. While several other like-minded representatives for Verizon and AT&T urged the commission to hit the "pause" button and reconsider the city's requirements, some residents argued that Palo Alto should go further. Barron Park resident Tina Chow suggested that the city adopt a setback requirement of 1,500 feet for wireless equipment near schools. Jeanne Fleming, leader of the group United Neighbors, which has opposed recent applications for wireless facilities, argued that the Architectural Review Board should be asked to review all requests for exceptions (current rules allow for but do not require the board to consider these requests). "Our goal is to ensure that the aesthetics and safety of our neighborhood is not compromised in the process," Fleming said. The commission also failed to reach common ground, with Commissioner Bart Hechtman arguing that some of the proposed ordinance's new rules are too onerous. This includes a requirement that applicants provide plans for all alternatives that were considered and rejected before the preferred site was chosen. In some cases, he argued, this would require applicants to provide analyses for more than a dozen sites that aren't seriously considered. Commissioner Doria Summa, meanwhile, argued that the ordinance should reflect the residents' wishes and consider building setbacks beyond the 20 feet adopted by the council. Recognizing the complexity of the issue, the commission voted to continue the debate to a future date, with Summa casting the sole dissenting vote.

A CENTURY OF SERVICE ... With the League of Women Voters celebrating its centennial this year, leaders of the Palo Alto branch stopped by City Hall on Monday for a special recognition by the City Council. The organization, best known for raising voter awareness, strengthening voting rights and holding election forums, is trying to get 100% voter participation in Palo Alto for the upcoming primary, said Ellen Forbes, vice president of the Palo Alto chapter. To that end, the group is holding a "Vote-a-palooza!" event on Saturday, Feb. 22 at the Rinconada Library, the city's main voting center. "You have a chance to go to the library with some suffragists and cast your ballot if you'd like that day," Forbes said. The event will go from 2 to 4 p.m. and will include food trucks and an appearance by Julie Lythcott-Haims, author of "How to Raise an Adult" and "Real American: A Memoir."

JOURNEY'S END ... After walking 22 miles per day for 28 days, Palo Alto firefighter John Preston concluded his journey from Palo Alto to San Diego in style on Feb. 9, when he arrived at the USS Midway aircraft carrier to a rousing ovation. The 625-mile journey that started on Jan. 13 aimed to raise awareness about mental health issues among first responders and veterans. Preston chose to walk 22 miles daily and carry 22 kilograms (the equivalent of about 50 pounds) to recognize the 22 veterans who die by suicide each day. Police officers, firefighters (including Palo Alto Fire Chief Geoffrey Blackshire) and mayors joined segments of his trek down the state, according to 22andyou.net, the website where Preston logged his journey. The department on Monday celebrated his trek by posting on Instagram videos of his triumphant entrance on the USS Midway. The caption also comes with a message from Preston: "It's okay to ask for help."

2 people like this
Posted by Resident
a resident of Another Palo Alto neighborhood
on Feb 16, 2020 at 7:39 am

Good infrastructure is essential and good cell service is more important now than ever before. With people giving up their landlines and the fact that there is a dearth of payphones, they are now essential. On top of the fact that they are important for person to person communication, they are necessary for finding out the time of the next bus/train, to accessing crucial information such as directions, reporting crime, meeting up with colleagues/family while away from home, and umpteen more things.

Having spent time in other places, in other countries, I can attest to the fact that Palo Alto is terrible when it comes to reliable cell service. I see neighbors outside their homes trying to make phone calls. I see dropped calls when it comes to getting even a simple message across.

It is time that Palo Alto stopped preventing the cell phone companies from putting in good service. Will it take serious injury or death because of lack of good signals to make Palo Alto see sense?

"Our goal is to ensure that the aesthetics and safety of our neighborhood is not compromised in the process," Fleming said.

LOL. PACC and the City Manager have already steamrolled "the aesthetics and safety of our neighborhood(s)" additional garbage can sized transmitters are not going to make any difference

Report Objectionable Content
Email Town Square Moderator
5 people like this
Posted by resident
a resident of Community Center
on Feb 16, 2020 at 2:20 pm

What percentage of the anti-antenna people own cell phones themselves? How is the reception in your part of town? Why don't you want other parts of town to have good reception?

Report Objectionable Content
Email Town Square Moderator
10 people like this
Posted by Anon
a resident of Another Palo Alto neighborhood
on Feb 16, 2020 at 3:31 pm

Posted by resident, a resident of Community Center

>> What percentage of the anti-antenna people own cell phones themselves? How is the reception in your part of town? Why don't you want other parts of town to have good reception?

"Pro-antenna" folks like to use these arguments, while "Anti-" folks use different arguments. This choice is a little like the old, "Are you a Communist or a Fascist?" pseudo-dilemma. Well, how about-- "neither". I have a cell phone and use it around town from time to time. I see some cell towers, and, see others only using an app that can detect the cell phone antennas that are designed to be invisible. Some, you would not easily detect. I like cell phone antennas that are:

Such antennas exist. If all antennas were like that, most people wouldn't worry about it or talk about it. I've seen a few installations that are the exact opposite: noisy, ugly, and right outside someone's window. I think such installations should be removed and replaced with silent, almost invisible antennas unobtrusively located.

Report Objectionable Content
Email Town Square Moderator
6 people like this
Posted by Anonymous
a resident of Duveneck/St. Francis
on Feb 16, 2020 at 7:14 pm

I was walking on Newell yesterday near Embarcadero - opposite PA Art Center/Rinconada Library - when I heard a weird noise. Stopping, I looked up to see a pole with noisy equipment in it. I assume it may have included cellular. I don’t think this should be located immediately by anyone’s home. As it was, near PA Fire Station and other municipal services, it was fine.

Report Objectionable Content
Email Town Square Moderator
15 people like this
Posted by Family Friendly
a resident of Old Palo Alto
on Feb 17, 2020 at 11:23 am

Report Objectionable Content
Email Town Square Moderator
2 people like this
Posted by Anon
a resident of Another Palo Alto neighborhood
on Feb 17, 2020 at 5:21 pm

Posted by Family Friendly, a resident of Old Palo Alto

We need an exact location to be certain. But-- yes, some cell installations are indeed noisy. They don't have to be, because others are silent.

It appeared to be additional equipment on the pole making the odd whirring noise, not a transformer -

Can you stay healthy without making more trash?
By Sherry Listgarten | 6 comments | 3,077 views

Think about helping others in our coronavirus-affected area
By Diana Diamond | 7 comments | 2,814 views

The University of California’s flexible policies during COVID-19
By John Raftrey and Lori McCormick | 6 comments | 1,201 views