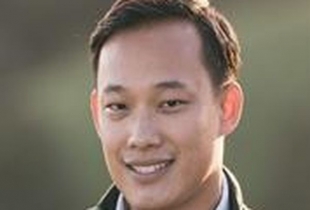 Human Relations Commissioner Steven Lee, one of two contenders for commission chair, called on his colleagues to vote for his rival, the Rev. Kaloma Smith, on Feb. 13. Image courtesy city of Palo Alto.

In a stunning move to avoid a potentially divisive and deadlocked election for the Palo Alto Human Relations Commissioner chairmanship, one of the two contenders, Steven Lee, on Thursday asked his colleagues to vote for the other nominee, the Rev. Kaloma Smith.

Lee said he had spent many sleepless nights considering the issue since the commission's contentious January meeting, during which Smith had accused other commissioners of slinging "slights and barbs" at him and Commissioner Patricia Regehr accused Chairman Gabriel Kralik of singling her out to change her vote. Regehr, who had nominated Lee, had said that she could not support Smith because he had not consistently attended meetings. Lee, who is outspoken, had been criticized by some commissioners who felt he asks too many questions. But Regehr said it was a trait that she welcomed.

Neither Lee nor Smith had garnered the required four votes for the chair seat after three tries during the acrimonious January meeting, and neither wanted to accept the vice-chair position. The commission last month decided to table the vote until Thursday in hopes that Commissioner Valerie Stinger, who was absent in January, could break the logjam when she returned.

But after the six members took a swift vote without discussion on Thursday, it soon became clear that once again neither Lee nor Smith had received four votes. The commission could have voted to table the election again until June, but instead Lee said he wanted to take the high road.

"I've lost sleep over this and it just consumed my mind for the past two weeks," he said. "I do care so much about this body, this commission; I don't want this to be deadlocked for the next 10 months. ... I'm going to be the bigger person here; I'm going to be the mature person. I will ask those who supported me to choose Commissioner Smith," he said.

At Thursday's meeting, Lee said that robust discussion was a positive thing for the commission and he has also worked to raise the commission's visibility. He regularly puts in many hours of work outside of the commission meetings by attending outside meetings and events. He said he had an expansive view of what the commission can do.

"Our debates make us stronger," he said.

On the first round of ballots for the night, the commissioners elected Smith by five votes. The ballots are anonymous and don't reveal who voted for each candidate.

Before turning over his seat to Smith, outgoing Chairman Gabriel Kralik said he was "profoundly moved" by Lee's stance. "I deeply admire his work," he said.

"That was a really gracious thing you did, for the sake of the commission," she said.

"I've known Valerie for more than a decade. She knows how to deal with people effectively," she said.

Stinger and Smith have worked together for a number of years in the community.

"It's a good match and a good fit," Savage noted.

"She will be a good guiding force for you, Pastor Smith, given her background and experience."

Stinger accepted the nomination. She won the vice chair seat on a ballot vote of 6-0.

"We are a group of volunteers with an extreme pool of talent. We're going to work really hard together because we have a big show to put on," Stinger said.

Smith said he had expressed his appreciation for Lee's work during a phone conversation they'd had earlier. From his new position leading the meeting, he said to the relief of all: "We can at least say we agreed on one thing tonight, and that was on Commissioner Stinger for vice chair."

What a bunch of self-important blow hard. Lee, Smith, the whole lot - sounds like they deserve each other.

Steven Lee showed true leadership and incredible strength and grace by stepping asside. It is an honor to know him.

Steven Lee defended the woman who attacked the guy wearing the MAGA hat on Cal Ave. Really? He is angling to run for office, using the Human Relations commission to assist. Why does he need to be chairman, if he really cares about human relations?

I thought it said he quit period.

Report Objectionable Content
Email Town Square Moderator
3 people like this
Posted by Paul C.
a resident of Midtown
on Feb 18, 2020 at 12:53 pm

Steven Lee shows graceful leadership vs. the opposite cut-throat power grabbing. People will remember you and you deserve some higher goals and positions.

Report Objectionable Content
Email Town Square Moderator
4 people like this
Posted by Anon
a resident of Evergreen Park
on Feb 19, 2020 at 7:56 am

I wonder why u took him so long?
There was a tie recently at city council and PTC two years ago it was resolved in the same meeting very quickly with no squabbling or name calling.

Can you stay healthy without making more trash?
By Sherry Listgarten | 7 comments | 3,216 views

Think about helping others in our coronavirus-affected area
By Diana Diamond | 7 comments | 2,927 views

The University of California’s flexible policies during COVID-19
By John Raftrey and Lori McCormick | 6 comments | 1,482 views