Life on March Air Base was boring, but none of the 195 Americans got sick from the deadly disease 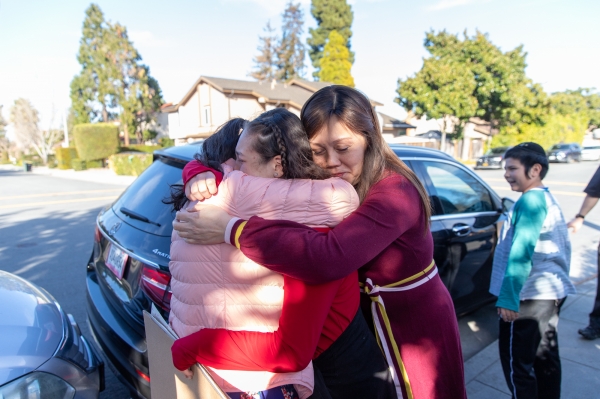 Esther Tiferes Tebeka hugs her daughters, 13-year-old Rivka and 15-year-old Chaya outside South Peninsula Hebrew Day School in Sunnyvale on Feb. 12. Rivka had not seen her mother and older sister in six weeks while the two were in Wuhan, China and quarantined as a precaution against coronavirus. Photo by Magali Gauthier. 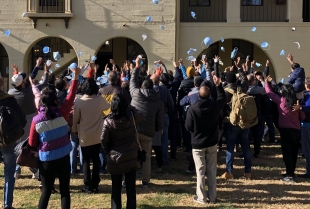 Evacuees throw face masks in their to celebrate their release from quarantine as a precaution against novel coronavirus at March Air Reserve Base in Riverside County on Feb. 11. Photo courtesy of Riverside County Public Health.

Thank you for your reassuring, in-depth reporting. Thankfully all turned out well.

I hope Esther and Chaya have the good sense to wear masks when they’re out and about town, might be a good idea for them to avoid restaurants too. Just our of an abundance of caution.

Report Objectionable Content
Email Town Square Moderator
9 people like this
Posted by RY1
a resident of Downtown North
on Feb 12, 2020 at 8:24 pm

Report Objectionable Content
Email Town Square Moderator
2 people like this
Posted by Alex Chen
a resident of Stanford
on Feb 12, 2020 at 8:30 pm

Report Objectionable Content
Email Town Square Moderator
6 people like this
Posted by Alex chen
a resident of Stanford
on Feb 12, 2020 at 8:57 pm

Too bad there’s no way to edit your own post. But my last one came off more as a rant. What I wanted to say is, everyone be vigilant and wary of those who are sick. Wash your hands, and if possible wear masks. Hope those who are infected or were in Wuhan does the same and look out for their fellow neighbors. Stay healthy everyone

I just read in Nextdoor, a message from Public Health Communications Officer Marianna M., County of Santa Clara. She's asking people to not discriminate against Asians due to the coronavirus. The thread was shut down before I could post a comment.

I can assure you that the Asian immigrant community and other generations of Asians are as fearful of the coronavirus as everyone else. Many are not socializing with other Asians. Many are criticizing those who do not self-quarantine. Don't blame all of us!

The U.S. should have stopped all flights from Asia. Although, many would still find a way to fly in from other countries, why make it so easy by allowing flights from Beijing to SFO?

Only the largest China Eastern stopped flying into the U.S. on February. 3 Web Link There are two others still flying to the U.S. The only mandatory quarantined passengers are from Wuhan. One million people left Wuhan for other areas before the shutdown. Why aren't all passengers from Asia being quarantined? Self-quarantine isn't good enough!

Report Objectionable Content
Email Town Square Moderator
1 person likes this
Posted by Christina C
a resident of Menlo Park
on Feb 13, 2020 at 6:30 am

[Portion removed.] I'm so happy this family is safe and reunited.

Report Objectionable Content
Email Town Square Moderator
3 people like this
Posted by Resident
a resident of Another Palo Alto neighborhood
on Feb 13, 2020 at 7:19 am

I am pleased this family is reunited, but the reality is that with modern global travel, precautions are necessary and even though this mother and daughter are back home, they are not necessarily free of the virus. It is so new that not enough is known about it. Covid 19, is not the same as other coronaviruses, it is going to cause more havoc before it can be controlled.

I wish them well, and sincerely hope they and their family members stay well, but the truth is that none of them (or us) are out of the woods yet. Remaining at home and separating themselves as much as possible from the rest of their family is wise as well as the rest of the community.

Report Objectionable Content
Email Town Square Moderator
14 people like this
Posted by Mary O
a resident of Crescent Park
on Feb 13, 2020 at 8:46 am

I feel confident that these two people are not contagious and do not need to wear masks or in any way be avoided. The CDC states that the quarantine period should range from 2-14 days. The US, in being cautious, kept them quarantined for the full 14 days. They were monitored constantly for signs of any symptoms. Let's welcome them home and be happy for them that they were not infected with the virus.

Report Objectionable Content
Email Town Square Moderator
12 people like this
Posted by QUARANTINE All Travelers From China
a resident of Community Center
on Feb 13, 2020 at 3:10 pm

The quarantine is a good idea to be on the safe side.

Are people even aware that in the firsdt week of the Wuhan virus outbreak, over a million Chinese left the area for other parts of China?

The Chinese government is having a difficult time tracking them down as no one will admit to having relocated from Wuhan.

So accepting travelers from other parts of China is a huge mistake from a public health standpoint.


Report Objectionable Content
Email Town Square Moderator
8 people like this
Posted by Not an expert
a resident of another community
on Feb 13, 2020 at 9:06 pm

Resident, What empirical evidence do you have for your assertion that this mother and her daughter "are not necessarily free of the virus"?

They have been cleared after 14 days -- longer than any virus is known to stay active in any carrier, according to the medical experts. These people owe nothing more to the community. They don't need to wear a mask or isolate themselves. That's been made very clear by the CDC and other public health officials.

The individuals who were in quarantine and those who are now in self-quarantine appear to be taking their responsibility seriously and admirably. Let's support them as a community.

I feel for the family, but sad that they are dramatizing pieces of their story to us. Not all 6 weeks were spent in quarantine. Tell us the truth. How long was their trip originally going to be? They were at least planning to stay through Jan. 24. Also concerning that the mother could wander the halls of the Riverside quarantine location and was upset she could not meet with her husband (I read this in an earlier article). Was she that careless about being quarantined when, at that time, she could have been carrying the virus without showing symptoms and could have spread it to her family and others? Quarantine rules are meant to be followed. Hope she is taking this seriously.

Flying: How to lower your impact
By Sherry Listgarten | 6 comments | 1,647 views