Stanford men send a message with its gymnastics victory 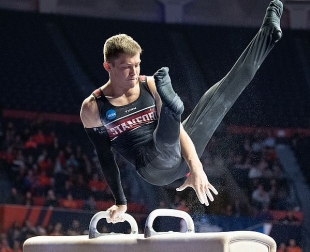 Ian Gunther scored an 83.750 to finish second in the all-around competition and qualified for the Winter Cup. Photo by Aaron Shepley and courtesy of Stanford Athletics.

Hosting No. 1 Oklahoma and No. 12 California on Saturday night at the Stanford Open, No. 2 Stanford posted the nation's best score of 420.050 to capture the team title, leaving little doubt it intends to compete for a second straight national title.

Brandon Briones/Stanford Athletics
"I think the guys definitely wanted to send a message that we're a legit team and we've got the goods to repeat," head coach Thom Glielmi said.

The meet also served as a qualifier for the USA Gymnastics Winter Cup, with Brandon Briones and Ian Gunther both qualifying. Briones, a freshman, won the all-around crown with a score of 84.450 – the second-highest score in the nation this year behind Minnesota's Shane Wiskus. Gunther scored an 83.750 to finish second in the all-around competition.

"We will now have at least six Stanford gymnasts who will compete at the Winter Cup," Glielmi said. "Briones and Gunther join current gymnasts Brody Malone and Riley Loos, and we've got Akash Modi and Grant Breckenridge who have already prequalified."

Modi recently finished his Master's at Stanford, while Breckenridge is finishing his degree as both gymnasts continue to train with the Cardinal.

Briones got his night off to a fantastic start, hitting for a career-high 15.000 on floor to eventually earn a second-place finish.

Gunther was the only gymnast to go for a 14+ on pommel horse, winning the event title with a career-high 14.050, but Stanford misfired a bit on the second rotation en route to a season-low 64.400.

Moving to rings, the Cardinal got the momentum swinging the right direction as it swept the top-five spots in the competition, headlined by Brody Malone's 13.950.

"Floor was a little slow getting started and pommels was a little tight, and then they just crushed on rings and kept the momentum going from there," Glielmi said of the turning point after the meet.

The Cardinal entered as the top vault team in the nation, and it showed its merit with a national-best 73.900. Malone captured his second event title of the evening, hitting for a career-high 14.900, while Lewis matched a career best with a 14.850 to take a share of second.

Sun led a quartet of Cardinal atop the leaderboard, with Briones (career-high 14.300), Gunther (career-high 14.200) and Lee (14.150) following in second through fourth, respectively.

Looking to close the meet strong on high bar, and with eyes set on pushing past the 420 plateau, Stanford did just – sticking nearly across the board for a 68.750 to finish with a 420.050.

Briones saved his best for last, posting a career-high 14.400 to win the event. Gunther took second with a career-high 14.050, with Blake Wilson claiming a share of fourth with a mark of 13.550.

The Cardinal prepares for the Pac-12 Invite on February 2, scheduled for 4 p.m. in Berkeley.

Singapore's oldest cafe was about to open in Palo Alto. Then, the coronavirus hit.
By Elena Kadvany | 2 comments | 5,900 views

A Pragmatic Approach to A Trillion Trees
By Sherry Listgarten | 4 comments | 4,216 views

Repairing a Disagreement with your Beloved & “Physical” vs. “Social” Distancing
By Chandrama Anderson | 2 comments | 2,903 views

The University of California’s flexible policies during COVID-19
By John Raftrey and Lori McCormick | 6 comments | 2,759 views