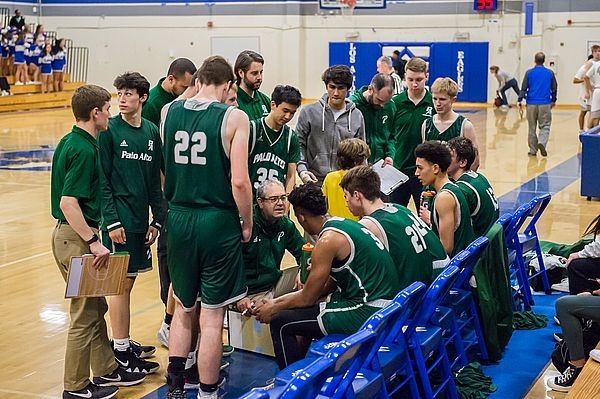 Palo Alto went into enemy territory and beat Los Altos to assume sole possession of first place in the SCVAL De Anza Division at the halfway point of the league season. Photo by Jenna Hickey. 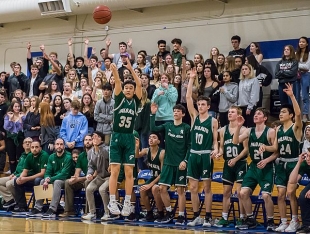 The Palo Alto boys basketball team was up for its showdown game Friday with Los Altos and turned in its best performance of the season in a 64-52 victory.

Los Altos (16-2, 5-1) suffered just its second loss of the season in a game Paly dominated throughout on the loser’s court.

“We really came out and gave it our all,’’ Aidan Rausch said.

Rausch hit three 3-pointers in the first half to help Paly establish a 35-26 lead at halftime.

“That felt real good,’’ he said. “It wasn’t that I was looking for my shot. It was about reading the defense and playing as a team.’’

Palo Alto has struggled at times offensively this season, but not on this occasion with first place on the line. The Vikings were 13 of 24 in the first half and finished at 48 percent for the game (21 of 44). They made six 3-pointers and were 16 of 19 at the foul line.

“We were executing our set plays much better,’’ Palo Alto coach Jeff LaMere said. “Jamir really helped run our offense. He’s a very good passer and was hitting the roll man on our screen and rolls.’’

Paly built its biggest lead at 53-36 early in the fourth quarter and withstood a Los Altos rally that cut the lead to seven at 57-50. That’s when Marzano made the play of the game with a steal and basket. He added two free throws shortly after to boost the lead back up to 11, and that was all she wrote.

“He made plays on both sides of the court,’’ LaMere said. “We give him the assignment of guarding the other team’s best player.’’

It was a relief to have some 3-pointers hitting the mark after making zero 3s in a win over Milpitas on Wednesday. Shepard, Marzano and Purpur each hit one to go along with Rausch’s three.

“We bought a new shooting machine and have really been taking a lot of shots in practice,’’ said Purpur, the team’s tallest player at 6-6.

The Vikings have now won seven in a row.

Confidence is growing among the players.”

“This game shows we can really play,’’ Purpur said.

Coronavirus: Plan ahead now for a big outbreak
By Diana Diamond | 20 comments | 4,377 views

The first few seconds after awakening; before I remember the virus
By Chandrama Anderson | 0 comments | 1,227 views