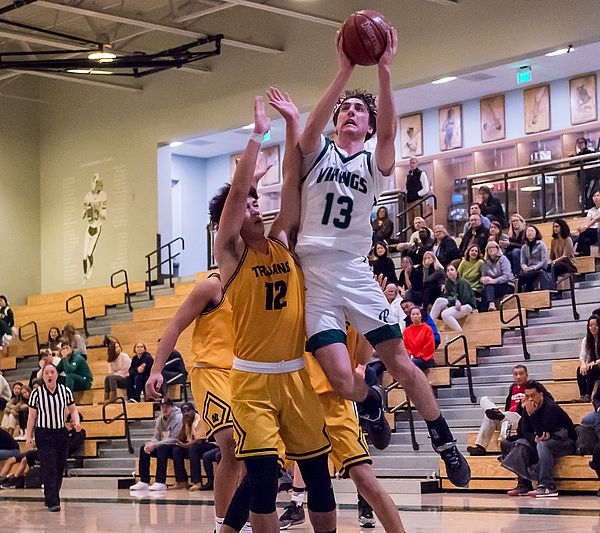 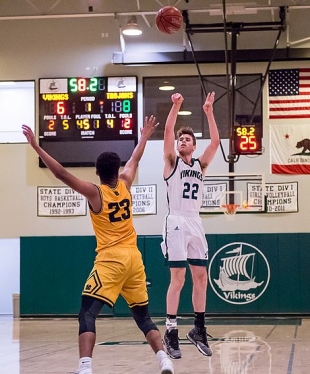 Ryan Purpur scored 15 of his 19 points in the second half. Photo by Jenna Hickey.

Palo Alto has won six straight and nine of 10. The Vikings are 8-3 away from Paly.

Missing two starters and a key sub, the Vikings also got big contributions from Jamir Shepard, Will D'Andre, Jack Elarde and Elijah Steiner, who combined to score another 15 points. Paly was 8-of-9 from the foul line in the final quarter.

Junior Aidan Rausch will likely be available for Friday's game but senior point guard Conner Lusk and 6-foot-6 Martin Segura are out.

Peninsula Athletic League South Division leader Menlo-Atherton maintained its unblemished league record with a 78-36 victory over host Aragon. The Bears (14-3, 5-0) take a 10-game winning streak into its home game against Woodside at 7:45 p.m. Friday. The Wildcats (11-5, 2-3) lost to host San Mateo 57-47 in another PAL game Wednesday.

In the West Bay Athletic League, Sacred Heart Prep kept itself in the title picture with an 83-26 victory over visiting Crystal Springs Uplands as Aidan Braccia scored 17 points, one of five Gators who reached double figures in scoring.

Aidan Burke scored 15 points for the Gators, followed by Jai Deshpande with 15, Harrison Carrington with 12 and Charlie Selna with 11.

The WBAL contest between Menlo School and Eastside Prep was postponed.

Coronavirus: Plan ahead now for a big outbreak
By Diana Diamond | 20 comments | 4,379 views

The first few seconds after awakening; before I remember the virus
By Chandrama Anderson | 0 comments | 1,229 views