M-A girls score 20 straight, all on 3-pointers and free throws 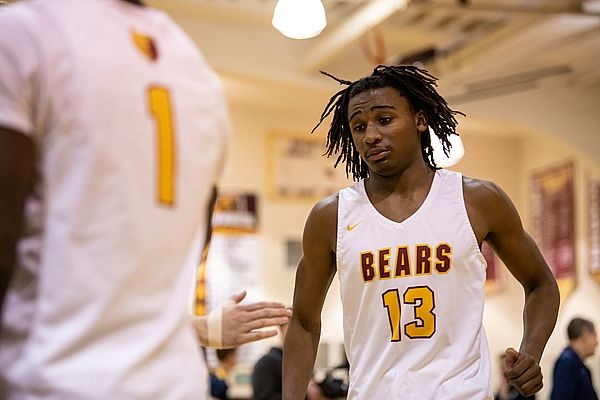 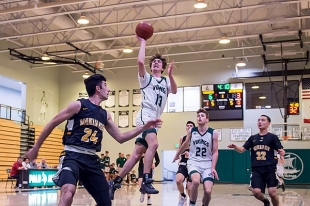 Ryan Purpur tips it off for Palo Alto. Photo by Jenna Hickey.
In the SCVAL El Camino Division, Gunn earned a 44-42 win over visiting Lynbrook. The Titans (7-7, 3-1) have a league bye Friday and host Palo Alto on Saturday in a joint, unified benefit night for The Gunn Foundation and for Paly's Rise Together Education. Both organizations work to make college possible for PAUSD’s low-income, high-achieving students.

(Visit the Gunn Foundation and Palo Alto's Rise Together Education. for more information)

Ryan Purpur added 12 points for Palo Alto, which has won six of its last seven games since losing in the opening round of the St. Francis Classic in December. The Vikings only loss during that stretch was a non-league game to Menlo-Atherton two weeks ago.

Menlo-Atherton remained undefeated in Peninsula Athletic League play with a dominant 80-37 victory over host Capuchino on Wednesday. Thirteen of the 14 players who saw the court scored as the Bears (12-3, 3-0) raced to an early lead and never slowed down.

Skyler Thomas recorded his best offensive game in a M-A basketball uniform, scoring 20 points on 90% (9-of-10) shooting. He, along with the other four starters, did not appear in the fourth quarter.

Alyssa Faberowski scored 17 points and Menlo-Atherton turned a nail-biter into a rout with a succession of 3-pointers and made free throws, which included a double technical foul and an ejection, that made up a 20-0 run in the second half in a 58-39 victory over visiting Capuchino.

Capuchino closed to within 26-24 with just under five minutes to play in the third quarter when Nicolette Yeh hit a 3-pointer. Faberowski hit two straight and Chai made it four in a row as M-A pulled ahead 38-24.

That's when the Mustangs coach was slapped with a double technical foul and ejected from the gymnasium. Faberowski hit all four free throws, followed by another Chai 3-pointer. Linnea Lindblom sank one of two free throws to make it a 20-0 run as Cap went nearly 10 minutes without scoring.

These local restaurants are donating meals to Bay Area residents in need. Here's how to help.
By Elena Kadvany | 6 comments | 11,495 views

Coronavirus: Plan ahead now for a big outbreak
By Diana Diamond | 20 comments | 4,379 views

The first few seconds after awakening; before I remember the virus
By Chandrama Anderson | 0 comments | 1,229 views