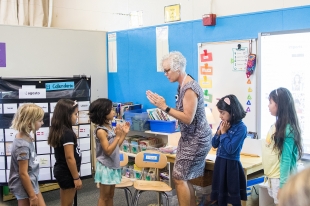 Second grade students participate in a clapping exercise at Escondido Elementary School on the first day of school on Aug. 14, 2019. The school saw modest growth and some decline on the California School Dashboard. Photo by Veronica Weber.

8 people like this
Posted by local parent
a resident of Another Palo Alto neighborhood
on Jan 14, 2020 at 2:14 pm

Indoor air quality is tightly correlated with illness (including infectious diseases) and absenteeism, and is probably the easiest of the many factors to address. The added benefit of doing so is higher student performance, and reduced STAFF absenteeism, too (look at Palo Alto teacher absenteeism by comparison with other wealthy districts with new facilities).

Here's an older review article, but there's plenty from the CDPH and EPA:
Web Link
"For instance, indoor pollutants might exacerbate diseases such as asthma or allergy that produce symptoms or absenteeism that in turn impair learning, or lead to use of medications that impair performance. Asthma is a principal cause of school absences from chronic illness, responsible for 20% of absences in elementary and high schools (Richards 1986)."

Traditionally underrepresented minorities and lower SES students tend to be more impacted by the above.

Our district has been weirdly resistant to taking even the most evidence-based, supported steps to improve air quality, that are even promised in prior facilities bonds and don't have to cost much. From what I've observed, they've not only been resistant, they've done a LOT that has been downright wrong and made things worse.

If the district is serious about absenteeism, it should get serious about improving indoor air quality. (Starting with shedding the WILLFUL IGNORANCE about environmental health and schools.)

Air conditioning will not curtail absenteeism as it is often the unninoculated children from other countries who are bringing in various communicable diseases that Americans once considered extinct.

Central air systems in hospitals actually create more airborne illnesses among patients & staff because the 'bugs' are already there having been brought in by outsiders.

Report Objectionable Content
Email Town Square Moderator
6 people like this
Posted by local parent
a resident of Another Palo Alto neighborhood
on Jan 15, 2020 at 2:02 am

What are you even talking about? Are you commenting on my post? Because your post was so grossly uninformed it's hard to know how to even respond.

The subject of indoor air quality in schools and how that affects health, performance, and absenteeism, is very heavily researched, and there is consensus among environmental health researchers because of research about various steps and practices that schools can employ to improve indoor air quality and directly reduce absenteeism (of students and staff) and improve student performance. Our district proactively rejects those measures and remains steadfast in their ignorance.

Here's a primer from the EPA:
Web Link

"Promote a healthy learning environment at your school to reduce absenteeism, improve test scores and enhance student and staff productivity."

One significant way you can get air quality problems is from moisture. People often talk about mold, but really the problem is dampness. Dampness, condensation or local high humidity from temperature gradients (such as carpeting on old uninsulated concrete slab foundations), badly designed irrigation, kids tracking water into classrooms. For example, JLS had annual flooding so severe for decades, the kids would often wade to class and track mud and water in all winter. They had roof leaks. They had ground water problems in the new construction.

The CDPH's statement summarizing the consensus of research is that if you even smell mold, you have a mold problem (and that research finds that mildew smells are a better indicator than testing that you have a risk to occupants, and testing is still not very helpful for reasons the statement explains). And, that "Known health risks include: the development of asthma; the triggering of asthma attacks; and increased respiratory infections, allergic rhinitis, wheeze, cough, difficulty breathing, and other symptoms."
Web Link

That's increased respiratory illness risks in everyone, not just those with asthma, as in the serious pneumonia and respiratory illness mini-epidemic among students AND teachers that JLS had a few years ago. Or the "flu" epidemic there at the very first day or two of school around then with tonnes of kids going home sick (never confirmed as anything infectious) before there was any possibility of an incubation period (Panther camp gets kids running all over campus and stirring up whatever crap settled in the closed up rooms just before). No one at Fletcher or Greene should feel complacent, Greene is probably the worst of the three, and Fletcher not only has a history of water problems, too, a student did a science project a few years ago that showed air quality problems.

As for HVAC systems, "Even when California schools install new heating and ventilation systems, the contractors aren’t properly adjusting or programming the units to provide enough ventilation to protect the health and welfare of students or their teachers, according to a study released this week by researchers at the University of California, Davis."
Web Link"
“Even in ... classrooms with new HVAC equipment, 85 percent of them were under-ventilated."

The article also points out that the reason such an easy shooting-fish-in-a-barrle problem goes unaddressed in such an overwhelmingly high percentage of schools is lack of awareness (in the case of our district, deliberate lack of awareness).

You want to improve absenteeism, this is the first and easiest place to start. If it's not addressed, no other measures will ever get the results we would otherwise have.

Report Objectionable Content
Email Town Square Moderator
5 people like this
Posted by @local parent
a resident of Palo Alto High School
on Jan 15, 2020 at 8:31 am

Where can we find stats on teacher absenteeism? Might be interesting to look at.

Report Objectionable Content
Email Town Square Moderator
4 people like this
Posted by local parent
a resident of Another Palo Alto neighborhood
on Jan 15, 2020 at 9:53 am

@ @local parent,
Do US Department of Education keeps those statistics. I think the last year for which you can get them is 2014.

This is another area in which we can improve student absenteeism, because teacher absenteeism is correlated with student absenteeism as well. There was a time when I read a lot about this issue, because I was concerned about the health of teachers in our district, and wondering if they were being impacted by the same problems. Students are more susceptible, but for example it was hard not to notice how much pneumonia there was among staff, serious respiratory illness, etc., when water problems were at the worst at JLS.

I remember finding that there isn’t a difference between teacher absentee rates among districts with more poverty and less. And that PAUSD seemed to have a higher than average absenteeism rate compared to the average.

That was a few years ago. But I’m sure you could find the data, look up terms like chronic absence teachers California or chronic absenteeism. But you’ll have to sort a lot because search tends to still bring up student absenteeism instead of teacher absenteeism. And there is a serious problem in California of teachers having to pay for substitutes when they’re sick for extended periods of time, so those links will come up first.