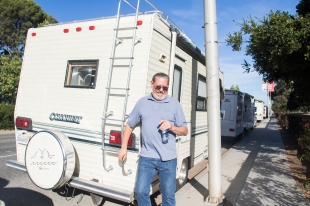 Ray, who declined to give his last name, heads back into his RV parked on El Camino Real in Palo Alto. Santa Clara County staff plan to identify more sites for vehicle dwellers to use this spring. Photo by Veronica Weber.

6 people like this
Posted by Resident
a resident of Another Palo Alto neighborhood
on Jan 15, 2020 at 9:07 am

There is a big difference between somewhere allowing overnight parking of a vehicle that is registered, taxed, insured and roadworthy which can drive off before 8.00 am, and a junk RV that has no ability to move under its own power be dumped in a lot so that someone can permanently live there.

Arguably, there may be a need for both and that can be very different sites, but they are completely different. If someone who lives elsewhere and drives in a vehicle that is set up for sleeping and hygiene as well as able to be used as transport during the day, comes to sleep in a church parking lot for a few nights at no inconvenience to anyone, then allowing them to do so is a good idea. If someone down on their luck and is able to rent a dilapidated RV dumped on the side of the road, then how can they be considered being in a similar situation?

Posted by Resident, a resident of Another Palo Alto neighborhood

>> There is a big difference between somewhere allowing overnight parking of a vehicle that is registered, taxed, insured and roadworthy which can drive off before 8.00 am, and a junk RV that has no ability to move under its own power be dumped in a lot so that someone can permanently live there.

I think there is a third case which makes the situation much worse. There are a number of vehicles with burned out engines and/or transmissions that can barely move a few miles on flat streets. They may leak oil. They may leak sewage. And the owners actually own houses in Fresno or wherever and work here during the week, spending Sunday-Thursday nights in their junk RV. This is "Type III".

>> Arguably, there may be a need for both and that can be very different sites, but they are completely different.

I would argue that there is no need for either, or, for Type III. RVs are simply inappropriate for modern cities, either as visitors or permanently. If there is a place for them, it is in a rural setting, e.g. farming and ranching, where a temporary dwelling is needed in different places at different times.

5 people like this
Posted by Anonymous
a resident of Another Palo Alto neighborhood
on Jan 15, 2020 at 11:05 am

What about the RVs that are owned by local residents, parked on El Camino, and rented out to those who might otherwise be homeless (or not save as much of their tech salary as they want)

Report Objectionable Content
Email Town Square Moderator
7 people like this
Posted by Anonymous
a resident of Duveneck/St. Francis
on Jan 15, 2020 at 3:53 pm

It’s actually funny: the Santa Clara County Board of Supervisors designates Palo Alto as the place for car dwellers from who knows where.
How convenient to shove the burden to the very north of the county.
I suppose they’ll be hired as cloud engineers or high end retail specialists at Stanford Shopping Center, these car dwellers.
How ridiculous to expect an (always) high end, highly educated community to provide this.
It’s like Carmel, Beverly Hills, Newport Beach, Orinda - to name just a few places.
It doesn’t SUIT these places, or Palo Alto, to have parking areas with derelict vehicles, those with drug/alcohol issues. It isn’t in a substantive city center like S.F.
We haven’t had any mass layoffs, with local workers thrown out onto the street. This isn’t Flint, Michigan with thousands of low skills workers unemployed and in distress.
Rather, I often see opportunism.
So I conclude these are vagrants or persons who gravitated here for services. The cost of providing those is challenging in a city where land is costly. We are very charitable and donate generously, as we should.
We do not suit as a destination for flophouse living.
We are built out in Palo Alto.
I see SAN JOSE as a large, spread out city with plenty of opportunities for infill. Land is far cheaper there, too.
Contact your city, county and state politicians to voice your opinions.
And I haven’t even gotten into CA governor Gavin Newsom (who wants to be President) and his billions of OUR taxpayer money he designates for the homeless in CA. Ummm....specifics, please? Because so far, it’s all been money thrown down the drain (See: S.F., where Newsom used to be mayor and where endless new numbers of derelicts are attracted by ever more government handouts. That’s our hard earned taxpayer money. Taxes are high in this state. I haven’t heard of Salesforce having mass layoffs in S.F., either, by the way.
Helping working poor to better manage their money and choices is a good idea. Real financial counseling, avoiding drugs/alcohol, getting more education, are laudable goals and we van assist those who have goals. The problem is the obvious thousands who want to live on the streets, panhandling, avoiding counseling, endangering the public, businesses and tourists.
Where are the priorities?

Report Objectionable Content
Email Town Square Moderator
9 people like this
Posted by Resident 1-Adobe Meadows
a resident of Adobe-Meadow
on Jan 16, 2020 at 3:53 pm

So why is the county focusing on MV and PA? Why not San Jose ? I am tired of PA being the punching bag for other communities that have larger commercial entities. And tired of PA being expected to make up what is lacking in MV, Sunnyvale. and San Jose.
What is that all about? Back off County - carve out county land and work with the land you already own. Use your land and assume liability for what goes on there.

Report Objectionable Content
Email Town Square Moderator
7 people like this
Posted by Confusing
a resident of Mountain View
on Jan 16, 2020 at 4:49 pm

I don’t understand why you are all so surprised or upset by this. You keep voting in the people who will continue to make these decisions and continue to destroy California.

One of the wealthiest states in the US and yet it’s ultra liberal policies are destroying the state. Highest taxes in the nation, middle class is leaving in droves creating the biggest disparity between the rich and poor in all of America. Streets of SF littered with human feces and needles. RVs being encouraged as places to live....if it weren’t so true you’d think this was a comedy or some far-fetched movie. RV’s being touted as places to live! In what world is this ever OK?

When are you people seriously going to wake up? Our State is being ruined by politicians, developers and totally misguided ideologies! Stop voting for them or quite frankly, stop complaining, you own this.

Posted by Confusing, a resident of Mountain View

>> One of the wealthiest states in the US and yet it’s ultra liberal policies are destroying the state.

Can you be more specific than "ultra liberal"?

I am concerned that each city has a distinctly different set of land available, different political issues, different tax producing entities. PA is woven around SU and what they are doing with their land. Otherwise we are built out. There is no comparison to Morgan Hill that has vast amounts of unbuilt land. And MV is being consumed by Google which creates a different tax base. Why are decisions made which are based on what other cities are doing? If you want a comparison to San Mateo County there are no RV's on El Camino as you go up El Camino through Menlo Park, RWC Atherton, etc. They are very clear on that topic. So all the RV's come down here to PA because we allow it. I do not want us linking car sleepers with what other cities are doing . We now have all types of low level crime going on. There were some people who tried that on our street and the people were up all night making noise, wandering around, leaving trash when they left. There was a continual hum of activity - opening their trunks looking for stuff.
All of these decision have nothing to do with human behavior which is unpredictable and variable. The city tries to make up rules and finds out that everyone will do their own thing and be all over the place.

One take is to open the bathrooms at the city parks and let the people park in the city park lots. But at Mitchell there are a lot of people who go there during the day and can't get a parking space so what is the good of that.