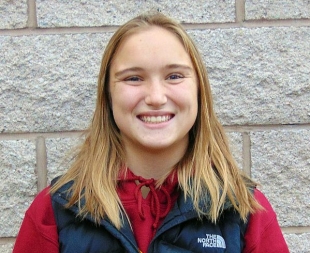 Anna Smith placed third in the 131 division of the Napa Valley Classic on Saturday.

Menlo-Atherton senior Anna Smith recovered from a loss in the championship quarterfinals to place third in the 131 division of the Napa Valley Girls Wrestling Classic at Vintage High on Saturday.

Smith, who won five of her six matches, suffered her first loss of the season to eventual champion Adaugo Nwachukwu of Silver Creek, 9-4. Nwachukwu is undefeated on the season at 17-0. Smith could possible wrestle Nwachukwu again in the Central Coast Section tournament, if not before.

Smith came back to beat Livermore's Ximena Pulido 8-0 in major decision and then topped Central Catholic's Leilani Martinez 2-0 in the third-place match. Smith beat Martinez 6-3 in the quarterfinals before losing in the semifinals to Nwachukwu.

Junior Hannah Hendrickson (170) placed sixth in her division, while nine others scored points for the Bears, who finished fourth with 102 points. Orland won the team title with 129 1/2 points.

Hendrickson needed four wins in the consolation bracket to work her way to the podium. She pinned Central's Melgoza in 43 seconds, pinned Willit's Isabella Nunez in 2:06, beat Salinas' Melanie Martinez 3-1 and downed Antelope Valley's Winifred Namosimalu 4-1 before losing to eventual third-place finisher Valerie Osborne (22-2) of Oakland. She also fell to Osborne in the quarterfinals.

Hendrickson, who was forced to retire in the second period of the fifth-place match due to an injury, opened with a 1-0 decision over Sequoia Cook

Menlo-Atherton's Julian Kim placed second in the 126 division of the Jim Root Memorial tournament at Prospect in Saratoga on Saturday. He led four Bears wrestlers who placed among the top eight.

Kim earned a bye into the quarterfinals, where he needed overtime to beat Calavares' Jonas Wong, 9-7, in sudden victory. Kim defeated Serra's Aidan Quinn, 7-4, in the semifinals.

Peter Sapountzis, who split four matches at 132 on the day, earned a 3-1 decision over Del Mar's Angel Padilla in the consolation final. Davud Khalilov was eighth at 113.

The first few seconds after awakening; before I remember the virus
By Chandrama Anderson | 0 comments | 3,043 views

Can you stay healthy without making more trash?
By Sherry Listgarten | 4 comments | 2,435 views

Think about helping others in our coronavirus-affected area
By Diana Diamond | 5 comments | 2,267 views