Also, city taking ideas on how to improve Boulware Park 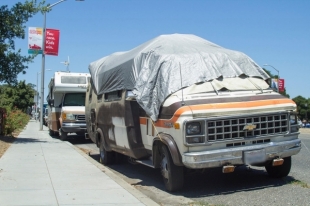 On Jan. 13, the Palo Alto City Council will consider a "safe parking" pilot program, which would give RV dwellers spaces to park overnight and access to case management services. Weekly file photo.

I am generally sympathy to and in favor or reasonable out of the way car camping as long as people are not being a nuisance or a mess. The van pictured in the photo for this article and others in this state of disrepair should not be allowed on the streets of Palo Alto, or anywhere else.

I drive all around the area and most of the campers, RVs and vans I see are in good repair, and to use this "vehicle" as the example for "RV dwellers" promotes negative bias that is already very strong.

7 people like this
Posted by Resident
a resident of Another Palo Alto neighborhood
on Jan 11, 2020 at 6:16 pm

There is an implied inference here that it can only be overnight parking, 6.00 pm to 8.00 am. This follows that the vehicles should all be roadworthy and able to be driven in and out of the parking lot. Presumably they should all be registered, taxed and insured.

Will it be the church or the City that oversees these types of checks?

Bag of trash and crushed card board boxes left in front of trailer on wood blocks parked on El Camino near Maybell Ave for 1.5 weeks, CA license No 1KP5337. Palo Alto already has a rat problem...

Kids on bikes, VTA and Stanford buses need to drive/bike in two lanes around the campers. El Camino is congested as it is and a huge traffic hazard with campers/trailers parked for weeks.


Report Objectionable Content
Email Town Square Moderator
13 people like this
Posted by Greer
a resident of Midtown
on Jan 12, 2020 at 10:02 pm

There are about 5-8 RV park on the both side of the Greer Park on Colorado Ave every day and every night. It was one or two untill 2017, but gradually, the numbers are growing. The same RVs park there all the time, but none of them have been towed away. Because of the RVs, I don't want to go to the Greer Park anymore. There is no street parking available anyway because of all the RVs.

This is not to disrespect @Greer, but it is certainly a sad state of affairs that the existence of parked RVs makes one not want to go to a city park. What is our expectation of the people who own/reside in those vehicles? Why do many of us assume that they are a danger to our person? or mentally ill? or just otherwise disgusting/undesirable to be around?

I know that when I encounter someone 'like that' - someone standing on the crossing island at an intersection with a sign saying "Please Help", or pushing a shopping cart piled high with 'stuff', or walking down the street with duct tape holding the soles of their shoes on their feet - I, too, avoid them, mostly because I am embarrassed and uncomfortable. I don't know what to do, or what I can do about it. And regardless of what amount of money that I give to any charity to provide help, the problem still exists and is still visible to my eye. Would I rather it be out of site? Absolutely! Then I would not be reminded of "There but for the grace of God go I ..."

Report Objectionable Content
Email Town Square Moderator
5 people like this
Posted by Online Name
a resident of Embarcadero Oaks/Leland
on Jan 13, 2020 at 2:35 pm

@TheyArePeople, nice post. Remember that many of the RVs are rentals that reportedly go for about $1,000 monthly, much less than market rate rentals of $3,000+ while many start-ups benefit from the "gig economy" that turns workers into under-paid contractors, offer no benefits and only enrich the execs and the investors (if they're lucky).

Yet housing bills like SB59 only call for 20% "affordable" housing and NO BMR (below market rate) housing while their supporters stridently and incessantly demonize opponents as "rich NIMBYs" who point out inconvenient facts like that.

That's certainly a sad and infuriating state of affairs when our "leaders" push up housing prices and create more homeless while enriching the really really rich.