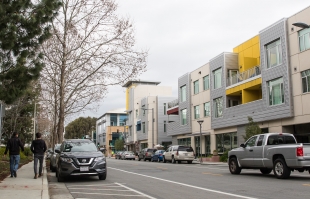 This is great news for renters, especially in Palo Alto where our pro-developer majority on the City Council (Fine, Tanaka, Kniss, and Cormack) consistently refused to consider rent control and other renter protection laws every time the pro-resident council members (currently Kou and DuBois) tried to pass such laws locally.

It's ironic that liberal Palo Alto is actually controlled by deep-pocket conservative business factions. That needs to change.

9 people like this
Posted by george drysdale
a resident of Professorville
on Jan 2, 2020 at 9:53 am

Chairman Chui's 1482 universal rent control has as much chance of surviving as a snowball in hell. With the ever increasing power of the internet the push back will be overwhelming. Economics teachers will be seeking to protect the young against governmental corruption. Rent control: the most studied subject in economics. It's just simple economics which the Democrats don't understand (not really, cheap votes to be had). You don't allow the customer (tenants) to set the price(rent control) because you know where that leads. Rent controls sound good but that is just on the surface. Follow the history of what develops. True the coast of California is a difficult place to build: sandy building sites, fault lines, steep rapidly rising mountains but rent control is the real stumbling block. Tenant protection but what about investor protections? Would you put fresh money into building apartment houses when you're hounded by tenants to give them a break on their rent while your expenses are ever increasing especially on older structures which have higher maintenance costs? A veritable feast for the aware awaits with Mountain View's attempt to "modify" it's unworkable rent control coming up this March. Go to the internet as see how predictable human nature is as this has happened many, many times.

It seems your concern is for investors that are making money 'hand-over-fist' (I know, it's a highly technical economics term - others may wish to look it up.)

What's the solution to protect those who don't own?

Report Objectionable Content
Email Town Square Moderator
7 people like this
Posted by Do the math. Use Excel.
a resident of Menlo Park
on Jan 2, 2020 at 3:03 pm

Increases capped at 5% Plus inflation is not great news for the typical renter with avg salary increases of 2-3% per year. It's better than nothing, but it's a boon for landlords, again.

Do the math over a 5-10 year period. Rent will double after 10 years, but incomes will only rise about 140%. Rent that is currently 43% of your monthly income will rise to 60%, which is obviously not affordable.

The only way the cap is reasonable is if your income also rises 8% per year, every year.

Report Objectionable Content
Email Town Square Moderator
2 people like this
Posted by Prtrr
a resident of Ventura
on Jan 2, 2020 at 5:07 pm

50% of landlords lose money, right? We gotta protect them!

Losing money on property you've owned for awhile is like going bankrupt running a casino. Only 1 boz69 does that.

Report Objectionable Content
Email Town Square Moderator
6 people like this
Posted by jim
a resident of Community Center
on Jan 3, 2020 at 10:41 am

Expand the HUD approach. Let the market dictate pricing and use the total of ALL taxpayers to subsidize folks that can't afford the rentals. This puts the burden on everyone rather than just landlords. We don't demand that Safeway lower or contain costs to be affordable. Price fixing and price controls always create problems in a market economy. Increase the supply of housing or increase the wages of the lower and middle class. Wages have not kept up with investment income.

Report Objectionable Content
Email Town Square Moderator
7 people like this
Posted by george drysdale
a resident of Professorville
on Jan 4, 2020 at 10:27 am

Jim and others. HUD doesn't have the money to build apartments in high priced places. Check HUD. Data point: 1482 is costing California about a billion dollars a week in damages and lost housing construction. Data gathering: The San Jose Property Rights Initiative. Three hots and a cot. Enjoy southern California beaches this winter. There is plenty of support housing for the homeless. It's just that they'd prefer not to live in such an organized situation. Data point: At this point in time (remember data does change, the more data points you have the better the data) there is not money for "affordable housing" except for the disabled. The conclusion: If you can't afford the very high rents in California go to Texas or somewhere else where you can afford to live. That's what the California's middle class is doing in droves. Politics: Chairman Chui and the San Franciscans will be tared and feathered and ridden out on a rail by the end of this year. Why? He's alienated virtually all property owners and with his conspiracy of rent control and no doubt set himself up for being the best most spectacular lesson plan in economics/politics.

Report Objectionable Content
Email Town Square Moderator
4 people like this
Posted by prop 13 commercial property loopholes
a resident of Charleston Meadows
on Jan 4, 2020 at 11:59 am

> George - what's the solution?
> It seems your concern is for investors that are making money 'hand-over-fist' (I know, it's a highly technical economics term - others may wish to look it up.)
> What's the solution to protect those who don't own?

"The conclusion: If you can't afford the very high rents in California go to Texas or somewhere else where you can afford to live."

Is that your sum total offering for a solution, or are you just here to finger-point?

Report Objectionable Content
Email Town Square Moderator
8 people like this
Posted by Resident
a resident of Community Center
on Jan 4, 2020 at 12:33 pm

For someone who claims to be a social studies teacher, it would be good to know where George thinks our teachers will live. For that matter, where will our health care workers and utility workers and retail workers and day care workers and the rest of a balanced economy and society live? Kind of tough to commute from out of state.

Report Objectionable Content
Email Town Square Moderator
7 people like this
Posted by george drysdale
a resident of Professorville
on Jan 6, 2020 at 1:37 pm

The free market works very well. If teachers can't afford to live in Silicon Valley do you think they will be banished? No, their wages must go up. Wages therefore for teachers in Silicon Valley are higher. You also can double up. The best approach with global warming is to leave California. All the trees in Palo Alto ready to ignite. With global warming and massive governmental deficit spending we're in deep trouble. There are no solutions just trade offs. What we don't need leading our state is market morons. The correction is beginning.