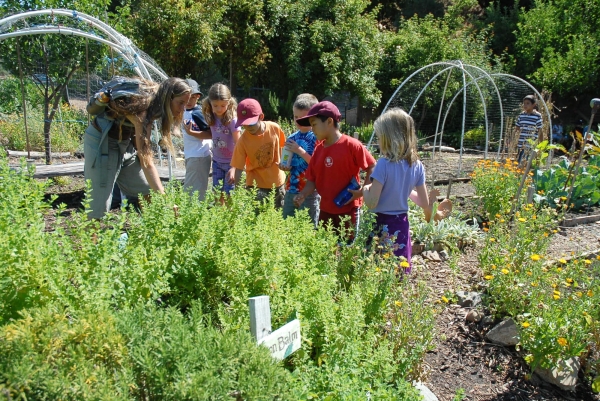 More than a thousand Bay Area children and teens attend camp at Hidden Villa in Los Altos Hills each summer, a tradition that dates back around 75 years. Photo courtesy Hidden Villa. 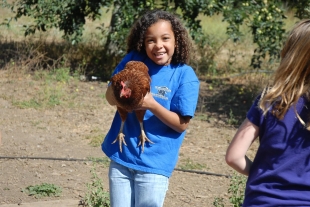 More than a thousand Bay Area children and teens attend camp at Hidden Villa in Los Altos Hills each summer, a tradition that dates back around 75 years. Photo courtesy Hidden Villa.

When Beatrice Piceno, 17, was planning her summer, she was immediately attracted to Hidden Villa's Leaders in Training program because she knew it would give her the opportunity to find out if working with kids is truly one of her passions.

"I came out of Hidden Villa saying, 'I really do want to do this,' most definitely," said Piceno, who is interested in pursuing a career in teaching or social work.

Leaders in Training provides youth entering grades 11 and 12 multi-week residential programs on the Los Altos Hills farm and wilderness preserve, with an emphasis on leadership and communication skills, conflict resolution and more (plus plenty of time for fun and outdoor experiences in the farm, gardens and woods). Once campers complete Leaders in Training, they're eligible to join Counselors in Training the following year, through which they gain more on-the-job experience caring for younger campers and finish up their summer with two weeks as paid counselors.

While she originally imagined herself working with teens, thanks to her time at Hidden Villa, Piceno is now considering a career working with young children. She recalled shadowing counselors and meeting one of the youngest campers on their first day, a shy girl in tears over leaving her mother and being separated from her older brother. Piceno took the girl by the hand and under her wing. By the end of camp, "that girl was friends with everyone," she laughed.

Piceno saw something of herself in that child.

"Going into Hidden Villa, I was extremely shy. I hated anything new, or anything changing," she said. She pointed to a particular moment at camp, looking at herself in the mirror, when she realized the impact the program had on her personally.

"I was thinking to myself, 'Just a couple of months ago you would never have been able to do this: not care what you looked like, not care about what anyone thought of you at that moment,'" she said.

"People (there) are all so different but they all make you feel part of the group," she said.

Clearly, Hidden Villa is more than just a place to take a picturesque creekside stroll, pick up some farm-fresh produce and snuggle up to an adorable baby goat. The nonprofit has a long history of championing cultural diversity, environmental protection and sustainable agriculture, starting with its progressive founding family, the Duvenecks, back in the 1920s. And it's especially dedicated to education. Around 30,000 people of all ages participate in one of its many programs annually.

Camp has been one of Hidden Villa's most cherished traditions for 75 years. Each summer, more than a thousand Bay Area children enroll, taking part in all sorts of traditional camp fun — swimming, singing, hiking and sleeping under the stars — but also learning about eco-friendly farming, animal husbandry, community-building and social justice.

Thanks to support from charitable donations, including a $5,000 grant from the Palo Alto Weekly Holiday Fund, financial assistance was granted to 215 young campers so they could attend this summer. Camp tuition, which ranges from around $500 to $1,5000 per camper, depending on the program, goes toward facilities upkeep and staffing. Families with an annual income under $150,000 are invited to apply for "camperships," as the financial aid is known.

While camp programs include children as young as 5, Summer Camp Director Brenda Jones said in recent years Hidden Villa has worked especially hard to improve and expand its programs for older youth, with more direct experience on the farm and an understanding of the issues that have been essential to the mission since its early days, when the Duvenecks created the first integrated, multiracial summer camp in the nation.

"What we're trying to do this year is really work with our programs for older campers to get them more hands-on learning of regenerative agriculture principles, different social-justice approaches and how that interacts with farm systems, and how those things connect," Jones said.

Reflections are a key activity during which "campers can come together and make connections with each other and really learn from our staff, who have personal experience with things like racial injustice," she added.

"Hidden Villa is a really open and accepting place," said Alex Huerta, 17, who, like Piceno, participated in Leaders in Training this summer thanks to a scholarship. Huerta said he's done a bit of gardening at home with his parents but that spending time on a working farm was a valuable experience.

"We had the chance to pick vegetables and fruit ... growing our own food. I thought that was pretty cool," he said.

More important, though, was the sense of community he found, not only through planned lessons, such as a seminar about being an ally to the LGBTQ community, but in the informal sense of openness and acceptance among the staff and campers alike.

"The vibe at Hidden Villa is super welcoming. ... That allows for the campers to have fun no matter what, to be themselves at camp," he said. "That's a new type of feel for me."

In contrast to Piceno, Huerta said he didn't have any particular interest in working with children before participating in Leaders in Training. Now, he said — recalling bonding with second-graders down by the muddy creek — "I feel like I could see myself doing it."

Both Huerta and Piceno said they plan on applying to return next year to train as counselors.

And no matter what future career he may pursue, Huerta credits his camp experience with helping him go into his senior year with a new sense of confidence.

"Being there really changes you; it really affects you positively," he said. "It's helped me come out of my shell. I've been told by family members, by my peers, by my friends, everybody, 'I don't know what it is but there's something different. You seem more confident; you're easier to talk to now,'" he said with a laugh.

"I think it's because of my time at Hidden Villa. ... It's like a big family; it sticks with you."

This year's Holiday Fund goal is to raise $400,000 for programs serving kids, families and others in need. More stories about the work of funded nonprofit agencies and instructions for donating to the fund online are posted here.

Coronavirus: Plan ahead now for a big outbreak
By Diana Diamond | 21 comments | 4,517 views

The first few seconds after awakening; before I remember the virus
By Chandrama Anderson | 0 comments | 1,408 views