Editorial: In its haste to address teen vaping, City Council misses the mark

Already illegal to sell to kids, Palo Alto will develop a ban on selling vaping products — to adults 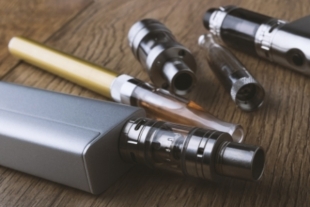 On Dec. 9, the Palo Alto City Council directed city staff to draft an ordinance that would ban the sale and distribution of electronic cigarettes. Photo by Getty Images.

Banning does nothing. They will buy it online. Purchased it in another city or worse, buy it on the black market where you don’t know what has been put in the product.

36 people like this
Posted by Agree completely
a resident of Another Palo Alto neighborhood
on Dec 13, 2019 at 10:05 am

I thought I would never say this. But I agree competely with this editorial. This is indeed virtue signaling by the council. And not the first time they are so busy patting Themselves on the back for a job well done that they do not realize how ridiculous their actions are. They shutoff next pass an ordinance banking alcohol in the city. After that they can go after fatty foods. No rush to deal with the real problems of the city.

Like this comment
Posted by Anon
a resident of Another Palo Alto neighborhood
on Dec 13, 2019 at 12:00 pm

I think that we should -ban- the use of the phrase "virtue signaling". Other than that, I agree with the editorial.

Report Objectionable Content
Email Town Square Moderator
16 people like this
Posted by LynneM
a resident of Duveneck/St. Francis
on Dec 13, 2019 at 1:04 pm

LynneM is a registered user.


Thank you for this Editorial. I agree completely. Plus I have a highly personal reason for objecting to this ban on adult purchasing of vaping products in Palo Alto. I am am older adult and a long time cigarette smoker. About 6 months ago I switched to vaping. Though I have no idea if this is any healthier, I can tell you my symptoms from cigarette smoking have diminished markedly. I no longer cough, spit up brown gunk, or am struggling to breathe. So, E-Cigarettes have helped me. And I hope to use them as a tool to quit completely. So, this is an inconvenience with no upside. It is also an infringement on the rights of all adult consumers where there is no legal justification for this restriction.

Report Objectionable Content
Email Town Square Moderator
15 people like this
Posted by @Anon
a resident of Another Palo Alto neighborhood
on Dec 13, 2019 at 1:25 pm

How about focus first on doing away with the *practice* of virtue signaling. Then the term itself will fade away naturally.

It's remarkable how many people today are bothered by a name that usefully identifies real (and questionable) behavior, more than they mind the behavior itself -- which prompted the name in the first place.

Report Objectionable Content
Email Town Square Moderator
6 people like this
Posted by Mark Weiss
a resident of Downtown North
on Dec 13, 2019 at 2:16 pm


I’d like to introduce an ordinance banning stampeding rhinoceroses through Lytton Plaza and then pat myself on the back for its effectiveness.

Report Objectionable Content
Email Town Square Moderator
4 people like this
Posted by Jan
a resident of another community
on Dec 14, 2019 at 7:38 pm

The FDA has complete specifications of all e-cigarette devices and liquids legal to sell in the U.S., unchanged since they required registration in 2017. They also are in charge of investigating chemically contaminated products. The CDC investigates germs. Per Scott Gottlieb, who was the FDA tobacco head at the time of the "deeming" them to be a tobacco product, e-cigarette is a legal "term of art" that refers ONLY to cigarette replacements and they do not contain THC by definition. The CDC doesn't know this, though all vapers in most countries of the world know it. Now I'm seeing people online say they have to correct friends who quit e-cigarettes but continue to vape black market THC because they think the deaths ara caused by contaminated e-cigs instead of e-joints ("dab pens") . The main stream media keeps quoting the CDC instead of the FDA, which has the same medial info but never calls these THC cartridges "e-cigarettes" because they aren't. Ignoring the FDA's advisories is like asking the Department of Water Resources what should be done to make high-voltage lines safe. WRONG DEPARTMENT. And that kind of inaccurate coverage is probably causing deaths.

Report Objectionable Content
Email Town Square Moderator
2 people like this
Posted by Jan
a resident of another community
on Dec 14, 2019 at 8:55 pm

Report Objectionable Content
Email Town Square Moderator
8 people like this
Posted by Ed
a resident of Downtown North
on Dec 15, 2019 at 7:17 pm

I actually agree with city council trying to something to deter youth embracing any form of vaping, regardless of what's in it, or what you call it. No, a ban won't stop the problem, and even if it is mearly symbolic, it's a start and a signal to politicians in different 'lanes' to do something better.

Report Objectionable Content
Email Town Square Moderator
9 people like this
Posted by TB
a resident of Menlo Park
on Dec 15, 2019 at 9:14 pm

I also agree with and support the City Council in moving forward to adopt the Santa Clara County's ordinance and prohibit the sale of flavored tobacco and e-cigarettes. I understand some adult smokers have felt these are positive for their health (compared to cigarettes), however, these products currently represent more population-level harm than benefit.

In September, the President said he'd take all these products off the market, but he walked back from that position ( Web Link ) These products are *not* currently authorized by the FDA; they have until May 2020 to apply for FDA pre-market review.

Now it's up to local jurisdictions to take action to protect our youth.

Report Objectionable Content
Email Town Square Moderator
6 people like this
Posted by TB
a resident of Menlo Park
on Dec 15, 2019 at 9:27 pm

PS - after e-cigarette / flavored tobacco manufacturers apply for FDA pre-market review, they still need to go through the process. There are toxins that are part of the e-liquids & devices themselves. Some of the food-grade ingredients have been tested in gastrointestinal systems, but not in lungs. In addition to the extremely addictive nature of nicotine, these are not harmless and need to be tested appropriately before they are authorized for sale.

As of last week, the FDA Commissioner is now Dr Stephen Hahn. (Dr Scott Gottlieb was there until April 2019)

Posted by @Anon, a resident of Another Palo Alto neighborhood

>> How about focus first on doing away with the *practice* of virtue signaling. Then the term itself will fade away naturally.

Generally speaking, I'm not a -prohibitionist-, because, often enough, prohibiting something provides an economic incentive for the now-criminal behavior. See Ken Burns documentary on Prohibition, for example. Did the Prohibition of cannabis discourage, or promote, use, abuse, and criminal distribution and profits? I don't suggest that we all become Prohibitionists towards vaping.

=> Current popular meaning" "Virtue signaling is the popular modern habit of indicating that one has virtue merely by expressing disgust or favor for certain political ideas or cultural happenings."

If the city council actually wants to publicly discourage vaping-- good for them.

Let's take a favorite example: the Prius. It has been posited that people choose a Prius over other hybrids because of its recognizable style, therefore signifying the owner's virtue. But, the problem with this hypothesis is that, at least during the time when the Prius really took off in sales, no other 4/5-passenger hybrid could get close to the low level of gas consumption city/highway that the Prius has. To accuse someone of "virtue signaling" because they drive a Prius presumes that you know that they don't care about the actual low fuel consumption. And, if you ask, and they tell you that they bought the Prius because of its low fuel consumption, don't accuse them of "virtue signaling". Because, in fact, they are trying to be virtuous. See the difference?

Report Objectionable Content
Email Town Square Moderator
2 people like this
Posted by Tartuffe
a resident of Greenmeadow
on Dec 16, 2019 at 3:50 pm

I get that people don't want smoking to pop up in some other guise, but it seems that most of the vaping problems were in modifications to vape THC. So, treat vaping as cigaretts so they are socially and tax discouraged (no problem) and maybe find a way to legalize or at least medicalize THC vapes. There is evidence that prolonged use of THC can cause pychosis in a small segment of the population, but alcohol can cause addiction problems. So, deal with it medically instead of making an illegal market out of it.