Woman puts up fight against robber on a bike 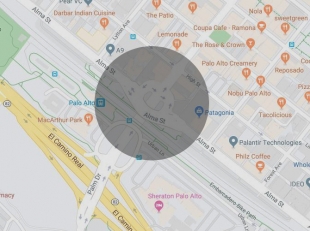 A bicyclist robbed a woman of her purse while walking along University Avenue near the downtown Palo Alto Caltrain station on the night of Dec. 11. Image courtesy Google Maps.

This is terrible! I hope real effort is made to find any video footage. I am outraged by strong arm robbery and know of several other such incidents against women in particular.

what an outrage ? how dare the cops violate the rights of the suspect by identifying his race ? was the theft for more $950 ? if not, california prop 47 says petty theft less than $950 will not be pursued to free up police resources for more serious crime. the funny thing is a suspect can commit as many petty thefts as possible and each theft will be de-prioritized as long as it is less than $950. so glad that I live in this liberal utopia

These criminals never live in Palo Alto, they travel distances thinking this is Candyland.

Safe Practices is a registered user.


I'm sorry this happened to this young woman. It must've been terrifying. Hopefully she's ok. I also hope the robber is caught and jailed for terrorizing people. Yes, it's just stuff, but she could've been seriously hurt or worse.

With that said . . . Look up! Be aware of your surroundings! Especially at night in the dark! If you must look at your phone, step to the side with your back to a wall or inside a building where you're protected.

Please do not respond by saying I'm blaming the victim. We all take precautions every day in life to keep ourselves safe because sh-t happens.

Report Objectionable Content
Email Town Square Moderator
8 people like this
Posted by Know a Robbery
a resident of Palo Verde
on Dec 13, 2019 at 12:27 pm

Know a Robbery is a registered user.


To Shane246: Agreed, if this were a petty theft. A petty theft is taking something of a value less than $950 from its rightful owner without permission and with the the intent to permanently deprive the owner of its use. Period.

It's hard to imagine not being outraged by this aggressive violation of the victim. This is NOT a petty theft! The intent is the same, but the crime is taking something of any value from a person by the use of ANY amount of force. This is a robbery, not a simple theft. Check out CA Penal Code section 211.

Posted by america steals lives daily
a resident of Southgate

Posted by kar4ma for trump enabling
a resident of Ventura