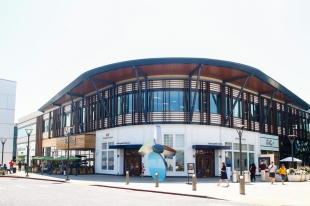 A woman was arrested for allegeldy burglarizing the Coach store at Stanford Shopping Center by taking $4,000 worth of merchandise on Dec. 9. Photo by Veronica Weber.

A woman who allegedly snuck into the Coach store at Stanford Shopping Center through a restricted entrance, hid until after closing time and stole nearly $4,000 worth of merchandise was arrested early Monday morning, police said Wednesday.

Police were tipped off by an alarm that activated at Stanford Shopping Center at 180 El Camino Real around 1:48 a.m. When officers approached Coach, they saw a woman walk out of the store, which sells luxury handbags and accessories, and detained her, police Sgt. Alex Afanasiev said.

Upon further investigation, officers found that the woman walked out of the store with three shopping bags and a backpack filled with $3,948 worth of merchandise, Afanasiev said.

They also found her with drug paraphernalia, a metal bar, a screwdriver and other miscellaneous tools.

The woman, a 35-year-old San Francisco resident, was arrested on suspicion of felony commercial burglary, misdemeanor possession of burglary tools and possession of drug paraphernalia, according to police.

According to Afanasiev, the woman walked in through an unlocked door restricted to the public and hid in the Coach store until after business ended for the day. The shopping center's website states the store closes at 6 p.m. on Sundays.

To avoid situations like the Coach store burglary, Afanasiev suggested that retail employees inspect all sections of their stores including bathrooms, if any, before they leave for the day and lock all doors.

Editor's note: The Weekly's policy is to withhold the names of those arrested for most crimes until the District Attorney has determined there is sufficient evidence to file charges in the case. See our guidelines here.

No name, no mug shot, description? Protecting her privacy? This kind of offense needs to be shamed.

The first few seconds after awakening; before I remember the virus
By Chandrama Anderson | 0 comments | 2,214 views

Can you Stay Healthy without Making More Trash?
By Sherry Listgarten | 3 comments | 1,534 views

Think about helping others in our coronavirus-affected area
By Diana Diamond | 2 comments | 1,088 views