'It can happen here': Local fire agencies grapple with new era of 'megafires' 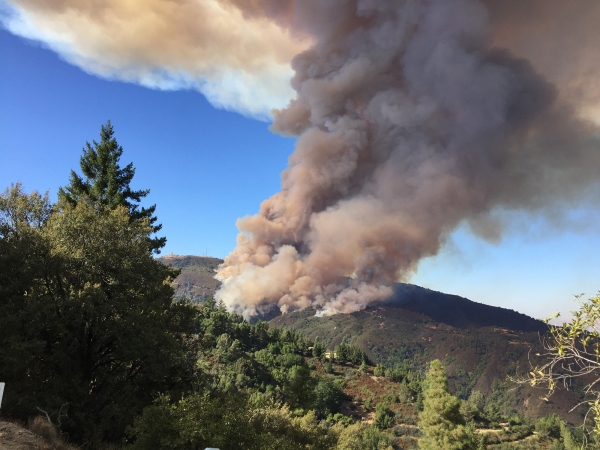 Ignited in September 2016, the Loma Fire in south Santa Clara County burned 4,474 acres, destroyed 28 structures and lasted nearly a year. More than 1,000 firefighters and 18 agencies battled the blaze. It was started by sparks from a portable generator used in illegal marijuana cultivation. Photo courtesy Cal Fire. 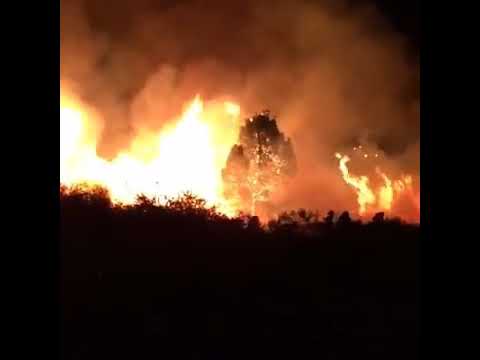 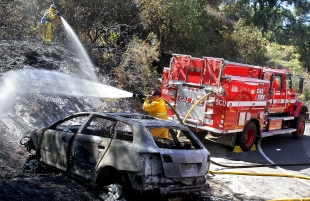 Kevin Wilcox, center, an engineer with the Palo Alto Fire Department, douses hot spots along a hillside of Page Mill Road just past Foothill Park where a car ignited a brush fire after trying to avoid hitting a deer and swerving into the hillside on June 13, 2014. Photo by Veronica Weber.

Despite what Fox News claims, the climate is significantly changing right before our eyes. I can remember when California's rainy season reliably started in October every year and the ski resorts at Lake Tahoe were usually open for Thanksgiving with all natural snow. Now days, the rainy season starts 1 or 2 months later in most years. The longer hotter more windy dry season is a big fire hazard to cities that didn't need to plan for it before.

8 people like this
Posted by Resident
a resident of Another Palo Alto neighborhood
on Dec 6, 2019 at 8:55 am

Comparing climate to 50 or 60 years ago is not enough. Climate has to be studied in 100s or years and even longer. Unfortunately many records do not go back that far but many do. We have to look at climate indicators from things like the rings in old trees and the stratas in pack ice and glaciers.

For California, for example, the climate has been altered by man made alterations to the landscape. The valleys were swamps in winter and droughts in winter. With water management we have altered the landscape for agriculture and other uses. This has altered the bugs, the wildlife and the amount of water in our rivers and natural waterways.

Remembering with nostalgia the weather of our childhoods is not very scientific. Looking at records and data from 100 years ago to see how temps and rainfall have changed. It may be very convenient to look at the 70s to see changes, but how about what was happening in the 50s, the 30s when we also have other scientific records? Or would those data points be more similar to what we are seeing now?

> It may be very convenient to look at the 70s to see changes, but how about what was happening in the 50s, the 30s when we also have other scientific records?

Deniers. The combination of doltishness, ignorance and/or willfulness (on the payroll of the extraction industry?) is stunning. I used to assume good intentions, that they were just ignorant and had not been reading. But geez, really?

The "gosh, maybe we need more data" fallacy, at this point, is the dumbest denier argument.


Yo, resident: what are the ten hottest years on record?

Report Objectionable Content
Email Town Square Moderator
11 people like this
Posted by Anon
a resident of Another Palo Alto neighborhood
on Dec 6, 2019 at 10:26 am

>> The problem is so vast that land managers and fire agencies must pick their battles, they said. Their most important strategy is to create and maintain "defensible space" against fires — areas around a building or road where vegetation, debris or combustible materials are cleared to slow the spread of fire.

I have to disagree with a couple of points. First, it isn't all about fuel -load-. Old-growth oaks, and, old-growth redwoods, have proven to slow down fire velocity compared to brushy or tall and thin growth and understory. Preserving as much heavy, old-growth forest, and clearing out grass, chaparral, and understory is beneficial in reducing fire risk. In fact, that is why periodic wildfires tend to increase the prevalence of some species, such as the heavier oaks, over other, less fire-resistant species.

Second, as was seen in most of the recent, most-destructive fires, "defensible space" simply is not enough. Buildings themselves have to be fire-resistant in order to survive intense wind-driven fires, because embers and firebrands can be transported by the wind for long distances.

Defensible space around homes is a necessary, but not sufficient, measure to take. Here is a guide to species of plants you might not want adjacent to your building. Web Link


Report Objectionable Content
Email Town Square Moderator
5 people like this
Posted by Duvenecks
a resident of Duveneck/St. Francis
on Dec 6, 2019 at 5:08 pm

Again, I'd like to bring to mind the increassed danger that opening up Foothills Park to a plethora of non-residents could bring, especially if the BBQ facilities remain.

Report Objectionable Content
Email Town Square Moderator
4 people like this
Posted by Safety First
a resident of Another Palo Alto neighborhood
on Dec 6, 2019 at 6:16 pm

Ah Duveneck, but that would be thinking holistically, but we don’t do that here lest it interfere with overdevelopment.

Posted by Safety First, a resident of Another Palo Alto neighborhood

>> thinking holistically, but we don’t do that here lest it interfere with overdevelopment.

Exactly. Every complex problem requires multiple steps. One step that people are very resistant to is that of making buildings more fire resistant. I would have thought that Coffey Park would have been the wakeup call on that aspect, but, people are still ignoring that inconvenient conflagration.

Some folks like to use the term "fireproof", but, since most people won't live in bunkers, that word is a bit of an overstatement. There are actions that could be taken that greatly reduce the vulnerability of buildings to wildfires and firestorms. The cost is more than cosmetic, but, still generally affordable, and even "modest" when you are talking about the high-end properties that populate the landscape in, e.g., LAH. This article describes a similar property down in Hollywood Hills: Web Link

Report Objectionable Content
Email Town Square Moderator
2 people like this
Posted by Pay to play.
a resident of Duveneck/St. Francis
on Dec 9, 2019 at 10:55 am

Pay to play. is a registered user.


LAH and Los Altos residents want access to Foothills Park, but they never, at any time, have offered to help PAY for the land's purchase or maintenance--though they were asked to participate in a neighborly way. They are a very wealthy community that wants Foothills access. They can afford to pay to play, and they should.

If they continue to opt to freeload, maybe Palo Alto should consider building high density housing on the edges of the park--next to fancy schmancy LAH mansions that currently have panoramic views of the park. We could use the tax revenues from these developments to do all of the necessary fire maintenance work. Perhaps a plan like that might motivate them to do their fair share.

It is tiresome to hear people trying to turn this into another access discussion. I can't think of a LAH-funded park or resource that I have ever used. LAH homes are geographically closer to Foothills Park than most Palo Alto residents' homes. They will use it more and their homes are more at risk. They want us to pay for their privilege and to mitigate their risk....They also want to keep "their" valuable panoramic views preserved. Step UP, freeloading LAH.