School board to discuss school mergers at special meeting this Friday, Dec. 6 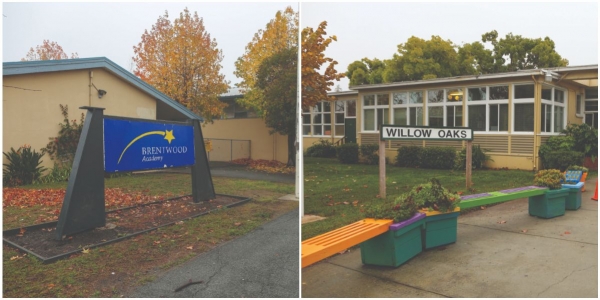 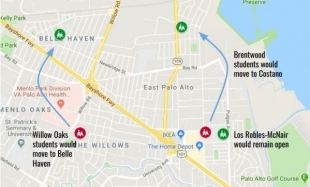 View the interactive map at tinyurl.com/RavenswoodClosures2019. Under the proposal from Gina Sudaria, interim superintendent of the Ravenswood City School District, and her leadership team, Willow Oaks Elementary School and Brentwood Academy would close in order to save the district money. Map built using Google Maps.

And yet it was just a few months ago that the same school board was fretting and spinning their wheels over the relevance of name changes. These are the results of an organization more concerned about symbolism over substance.

5 people like this
Posted by Anon
a resident of Another Palo Alto neighborhood
on Dec 5, 2019 at 2:57 pm

The problem with closing Willow Oaks is the severe bottleneck getting across 101.

revdreileen is a registered user.


The effects of closing both of these schools will impact students who live west of 101 the most. Closing one or the other makes sense, but not both of them. The children in my neighborhood will have have to go to school very far from home.

Mark Dinan is a registered user.


These are tough decisions driven by declining enrollment due to Charter Schools, Tinsley, and The Primary School. The teachers union, the acting superintendent, and the school board seem to be aligned on this plan, and undoubtedly hate having to close schools to save money. "Ripping off the bandaid" and tackling this head on to address the huge deficit is the right thing to do. I commend the leaders who are driving this process. While it is tough news to absorb, keeping half empty schools open is a very bad financial proposition.

Report Objectionable Content
Email Town Square Moderator
6 people like this
Posted by Miguel
a resident of East Palo Alto
on Dec 5, 2019 at 5:21 pm

Commend all involved for stepping up and recommending to the Board to contract both at once rather than one at a time. NEVER announce to a bargaining unit, certificated employees, that they’ll be no layoffs and only rely on attrition. Notice the appropriate number of certificated, I.e. worst case, by March 15th. Don’t create a classified vs. certificated comparison needlessly.

Report Objectionable Content
Email Town Square Moderator
2 people like this
Posted by SAD
a resident of East Palo Alto
on Dec 5, 2019 at 9:03 pm

This is a sign that the district will no londer exist 10 years from now. .

Posted by SAD, a resident of East Palo Alto

>> This is a sign that the district will no londer exist 10 years from now. .

Why? Is the entire district being converted to office parks? More generally-- is there a link to a webpage that explains why the school age population has declined so drastically in the district?

I find that the leadership still does not get it. Why close the only school West of 101 (Willow Oaks) where I would have to assume a large group of students/families live. There is no safe route to walk or bike to the other campuses which causes more congestion. Yes, there be busses, but that doesn’t always work for students who have different schedules.

How strange that the OConnor Street petition brought the proximity to schools as a valid argument on why they wanted to attend MPSD and now the only school in RSD in the Willows is closing down and the next nearest one is closing as well which strengthens the rationale of this group as people want to go school in their neighborhoods and not be biased for 45 minutes to schools across the freeway.