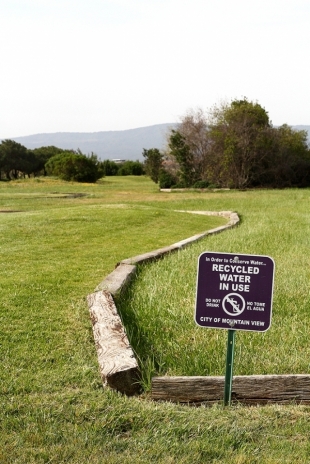 The Shoreline Golf Links golf course in Mountain View is irrigated by recycled water from the Regional Water Quality Control Plant in Palo Alto. The two cities are now exploring a new deal with Valley Water that would expand use of recycled wastewater. File photo by Veronica Weber.

5 people like this
Posted by Resident
a resident of Another Palo Alto neighborhood
on Nov 11, 2019 at 6:44 pm

What happens to the salt?

5 people like this
Posted by Ecoist
a resident of Another Palo Alto neighborhood
on Nov 11, 2019 at 6:54 pm

How much natural gas will it take to provide power for the plant? The planet uses solar power to make fresh water.

They do not call it salt, they call it Total Disolved Solids (TDS). How will they get it out? As much as I admire Phil Bobel, even he cannot answer that question.

Sorry, I am not buying it, it is nasty stuff.

Whoops, miss type, the city is going to buy it for us,with our tax money,whether we like it or not.

>> "Essentially, we're selling a 76-year option for $1 million a year," Filseth asked. "Is that a good deal for Palo Alto? That's the question."

That seems unwise on the face of it.

My real concern is energy. Will this facility use fossil fuel (specifically natural gas) as an energy source? That would be a serious problem.

Report Objectionable Content
Email Town Square Moderator
7 people like this
Posted by Good question
a resident of Another Palo Alto neighborhood
on Nov 12, 2019 at 1:42 pm

"Essentially, we're selling a 76-year option for $1 million a year," Filseth asked. "Is that a good deal for Palo Alto? That's the question."

Good question. What was the answer? Was it discussed?

Report Objectionable Content
Email Town Square Moderator
11 people like this
Posted by Citizen
a resident of Community Center
on Nov 12, 2019 at 2:20 pm

No Eric, it's not a good deal.

Report Objectionable Content
Email Town Square Moderator
4 people like this
Posted by susan
a resident of Adobe-Meadow
on Nov 12, 2019 at 7:44 pm

Selling our future to Water District (AKA the Golden Spigot) is a terrible idea!

Posted by Jeff Salver, a resident of Palo Alto Hills

>> Oh I can't wait to drink Wastewater I

From the project description, you might have to wait a while. It sounds like the water is going to water corporate office park lawns to start. Am I missing something?