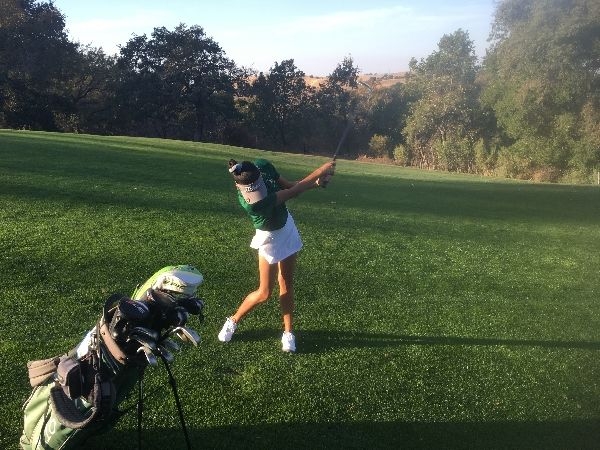 Priya Bakshi shot a 76 and finished 19th overall for Paly. 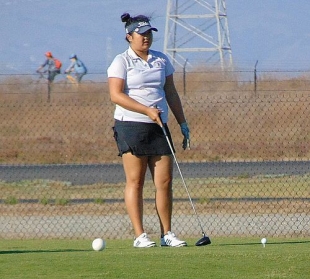 Sung shot a round of even par 72 to help the Vikings finish third as a team with a 377, six strokes back of NorCal champion Dougherty Valley and five strokes behind second-place Granite Bay.

Sydney Sung. Photo by Katherine Sung.
It is Paly’s highest finish in the NorCal tournament since a second-place showing in 2013, with two-time CCS medalist Michelle Xie leading the way.

As a result, Palo Alto advances to the CIF State Girls Golf Championship on Tuesday, November 19 at the Poppy Hills Golf Course in Pebble Beach.

All six Paly golfers finished within seven strokes of each other and placed among the top 39 of the 89-player field.

Granite Bay’s Ellie Bushnell shot a 5-under 67 to earn medalist honors. Sung was the second-highest finisher from the CCS, Los Gatos’ Elizabeth Lu was seventh with a 71.

“I’m so happy and proud of the team for qualifying for State this year. We have come close before, but this is Priya and my first time making it to State in our high school career," Paly senior Katherine Sung said. "We are so excited to end of our high school golf careers by making it to state."

Priya Bakshi placed 19th with a round of 76, Bridget O’Keefe was 24th with a 77 and Lauren Sung was 33rd with a 78, matching Pinewood’s Megan Chou. Marina Mata shot a 79 for the Vikings.

"I am super proud of our team for playing consistent and all shooting in the 70’s," Katherine Sung said. "Everyone’s efforts today really helped us get to this point.”

Palo Alto won its third consecutive CCS title to advance to the NorCals but O’Keefe was the lone Vikings representative at the state tournament.

“It’s been a goal of ours to qualify for state as a team since the beginning of the season," Bakshi said. "We’re excited that we finally qualified and are ready to represent NorCal at State.”

Singapore's oldest cafe was about to open in Palo Alto. Then, the coronavirus hit.
By Elena Kadvany | 2 comments | 7,265 views

A Pragmatic Approach to A Trillion Trees
By Sherry Listgarten | 4 comments | 4,357 views

Repairing a Disagreement with your Beloved & “Physical” vs. “Social” Distancing
By Chandrama Anderson | 2 comments | 3,054 views