Arborist: Tree at the downtown Palo Alto post office was neglected and dying 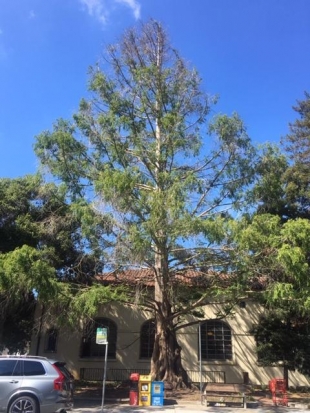 Planted in 1949, this dawn redwood tree in downtown Palo Alto is 88 feet tall. Concerned residents, city staff and a local nonprofit raised concerns -- up to members of Congress -- when they realized the United States Postal Service was not watering the tree. Photo courtesy Winter Dellenbach.


The 1948 expedition was actually funded by UC Berkeley and the SF Chronicle and they sent Dr. Milton Silverman who was the SF Chronicle Science Reporter to China to locate the live Dawn Redwoods and bring back seeds. Silverman was the person who named the species the Dawn Redwood. The first US plantings were at UC Berkeley and in Golden Gate Park.

Anne Le Ziblatt, formerly of Tamarine and Bong Su, is back with a Vietnamese noodle bar in Redwood City
By Elena Kadvany | 7 comments | 3,164 views