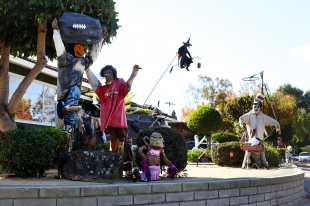 A local home's front lawn is filled with Halloween decorations ahead of the holiday on Oct. 30, 2013. Weekly file photo.

Like this comment
Posted by Resident
a resident of Another Palo Alto neighborhood
on Oct 31, 2019 at 8:37 am

If only Palo Alto could keep the children in their own neighborhoods. Why do they always want to go elsewhere rather than stay within their own neighbors who have bought candy to give to their neighbors? So many older people wait for the doorbell to ring to hand out candy but few come.

Sad that it is now bigger, better, best rather than neighborly community.

We like the kids coming to our house! There are not many little kids left in our hood! Welcome and happy Halloween!

Mark Dinan is a registered user.


We are looking forward to a fun & safe Halloween celebration tonight in East Palo Alto. Details on tonight's celebration can be found at:

Lots of people are coming together to make this event a success!

Anne Le Ziblatt, formerly of Tamarine and Bong Su, is back with a Vietnamese noodle bar in Redwood City
By Elena Kadvany | 7 comments | 3,164 views