Rafael Viñoly incorporated community, nature into the heart of the project 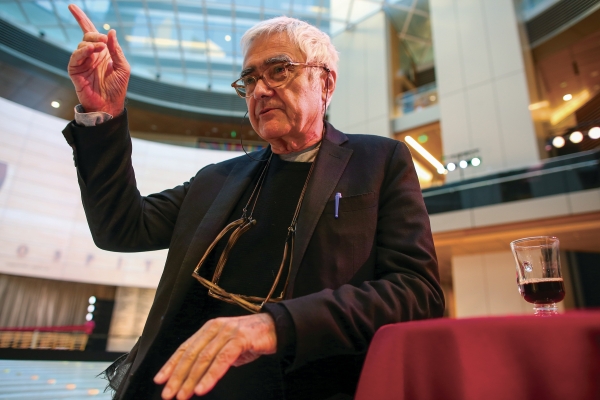 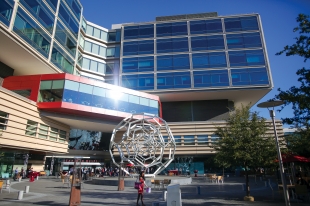 The new Stanford Hospital at 500 Pasteur Drive will welcome its first patient on Nov. 17. Photo taken Oct. 23 by Sammy Dallal.

Uruguayan architect Rafael Viñoly has designed iconic structures around the world that have earned him international recognition: including the Jazz at Lincoln Center in Manhattan, the sweeping Tokyo International Forum in Japan and the 38-story "Walkie Talkie" building in London. These monumental structures might dwarf the new Stanford Hospital, but the $2 billion facility is arguably one of his most ambitious hospital projects.

Viñoly stood in the circular, natural-light-infused atrium at the new building he designed at 500 Pasteur Drive before a ribbon-cutting ceremony that celebrated the completed project on Wednesday morning. Covering, 824,000 square feet, the seven-story building's soaring glass-and-steel dome frame the surrounding hospital towers outside.

Viñoly's design, which includes 3 acres of surgical floor space, a community friendly atrium and a new Level-1 trauma center and emergency room, was informed by a plethora of concepts he said are vital to the community and the facility. He considered functionality, communication, Stanford's role as a teaching hospital and creating a place for community where patients, visitors and staff can move and interact in meaningful and beneficial ways.

Considering the region's burgeoning population and Stanford's prominence as a regional and global medical facility offering specialty care, Viñoly said he designed a hospital that can be nimble, flexible and expanded. Hospitals have many functional requirements, but they can't afford to have a short shelf life.

"For hospitals, it's essential to grow. We design into the DNA of the building the concept of being able to grow. It's a shape that can evolve into more shapes. You don't have to reinvent the wheel every time," he said.

The building's four cubes placed in a cross pattern are "modular" structures that won't constrain future growth, he said. The spaces can be reconfigured to add additional structures as the hospital's needs and technology change in the future, he said.

Most hospitals are closed structures with a defined perimeter, so Viñoly designed the building on a horizontal plane so it can almost "breathe" with its surroundings. Five healing gardens and picture windows offer views of nature from 368 single-patient rooms.

"The configuration is based on the idea that one of the most important things is the interaction with nature. ... We thought this is a great opportunity to do a sliding of nature into the building," he said.

It's a concept that he used in the three-story "sky garden" in London's "Walkie Talkie" building, officially known as 20 Fenchurch Street, which combines landscaped public gardens with social spaces, an observation deck and an open-air terrace looking out over the city from atop the 525-foot-tall building.

Viñoly also designed the hospital for another fundamental concept Stanford wanted to incorporate: a sense of community. There's a fluid sense of movement in how people circulate through the building, with an emphasis on walking rather than being moved through the building by mechanical means, such as elevators, he said.

He also spent much time observing interactions between groups of employees to understand how they work. How groups of employees work and collaborate so they are most efficient was a primary driver for the design and placement of operating rooms, diagnostic equipment, specialized units and emergency department design.

"We do think it's important to have a sense of unity and belonging to this wonderful group of people," he said. "Buildings are nothing other than hardware. The important thing is the software — the people. The software here is very different than other places. You have to be attuned to that," he said.

David Entwistle, Stanford Health Care president and CEO, manned giant scissors to slice the Cardinal-red ribbon in the hospital atrium during Wednesday morning's dedication. It felt "surreal" to reach such a milestone after 10 long years of planning and construction, he said.

"For so long, Stanford Hospital has been a distant dream. It's exciting, it's innovative, it's peaceful," he said.

The new hospital will add 368 new private rooms for a total of 600 on the whole campus, which includes the old facility at 300 Pasteur Drive that will be retrofitted and renovated as soon as patients are transferred to the expanded space at 500 Pasteur Drive, he said.

Palo Alto Vice Mayor Adrian Fine, who also spoke at the dedication, was born at the hospital, as were his siblings. The hospital is "deeply intertwined" with the community, he said.

"Having a world-class hospital right here in our neighborhood, delivering care informed by the latest research and discoveries, is an immense benefit to those of us who call the Bay Area home," he said.

Stanford University President Marc Tessier-Lavigne, School of Medicine Dean Lloyd Minor and John Levin, chairman of the Stanford Health Care board of directors, were among the more than 125 people who attended Wednesday's ribbon-cutting ceremony. The event was livestreamed to Stanford Health Care's 11 campuses and viewed by hundreds of off-site staff members.

On Nov. 17, hospital staff will wheel the first patient out of 300 Pasteur Drive, across the enclosed bridge between the two structures and into the new hospital. A patient will follow every four minutes until the old hospital is empty.

• From a major quake to other mass-casualty incidents, new Stanford Hospital ER is ready for any disaster

• New Stanford Hospital has lots of high-tech, but some older systems still remain

• VIDEO: The New Stanford Hospital - A Q&A with David Entwistle

• Hear Dr. George Tingwald, medical planning director for Stanford Health Care, give an overview of what's inside the new Stanford Hospital on an episode of "Behind the Headlines," now available on our YouTube channel and podcast page.

How about a photo or two of “this amazing facility.”

Just Google "prison block" and you'll have plenty of similar looking facilities to peruse. How they got away with the eyesore of a design is beyond me. Same with the new grad housing.

A Pragmatic Approach to A Trillion Trees
By Sherry Listgarten | 1 comment | 2,397 views

The University of California’s flexible policies during COVID-19
By John Raftrey and Lori McCormick | 6 comments | 1,899 views

Repairing a Disagreement with your Beloved & “Physical” vs. “Social” Distancing
By Chandrama Anderson | 0 comments | 1,255 views