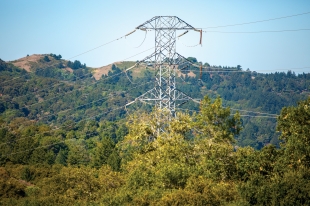 A few residents in the Palo Alto Hills served by PG&E were among the more than 700,000 customers who lost electrical service last week. Photo by Sammy Dallal.

Rate payers and all of us were being held hostage by a for profit energy company. Their executive action to shut down the grid was beyond comprehension. If Pacific Gas and Electric company’s grid is so decrepit and in disrepair N. Calif would have burned up 10 years ago. This Co. should have been forced to break up in the early 2000’s Enron debacle. The CPUC is as much to blame. The Genie in the PGEenie is out after its vessel was rubbed too many times by its own financial hand! What’s more. A massively top earning, heavy company like this relies solely on our public agencies to put out the fires they have stoked and ignited. Who pays for that?

Posted by Outwiththegeanie, a resident of Palo Alto Hills

>> Their executive action to shut down the grid was beyond comprehension.

Could it possibly be that they didn't want another costly fire, like Paradise, like the ongoing Saddleridge fire that SoCalEdison lines may have started? Web Link

>> If Pacific Gas and Electric company’s grid is so decrepit and in disrepair N. Calif would have burned up 10 years ago.

Been away long? The Sonoma County Fires, which endangered -literally- at least 8 people that I know personally, ring a bell? Web Link
Ever heard of Paradise? Web Link

I agree. CPUC should have re-written the rules to strongly incentivize safety right after San Bruno.

>> A massively top earning, heavy company like this relies solely on our public agencies to put out the fires they have stoked and ignited. Who pays for that?

Everybody in the State, obviously. Given the bankruptcy, I think the State needs to step in and take over PG&E. There is NO WAY for the public to avoid paying for this directly and indirectly. The beauty of corporations is that there is no way to get back the ignorantly paid earnings and dividends and investment purchases. Rates will have to go up, we will continue to pay for fire suppression, everybody will have to pay for right-of-way maintenance one way or the other. It sucks, but, Milton Friedman and Alan Greenspan were wrong-- there are just some things that "the markets" do badly.

To Anon. I was raised in Sonoma County. It is a poorly designed rural to urban landscape since WWIi. The once native grass fed land was gauged out by corrupt developers and amateur millionaire vintners . In the fall of 2017, For three days my nephew was packed and ready to evacuate in Healdsburgh (10 miles from Tubbs lane). Santa Rosa’s Journey’s End mobile home park was a tragic/ironic bi-product of all of it. I was there when the PGeenie rolling black outs of the early 2000’s were taking place. I even had a family member work for them in the 1990’s and left the Co. just prior to 2000 for their sneaky ways and backroom deals.

I then moved to Chico. Every friend I knew in Paradise lost something, someone and everything. My 95 year-old mother had to prepare to vacate her Chico home 2 miles from the fire line. A couple I am close who lived in Paradise for 45 years and in their early nineties escaped with just a few boxes. They lost all and will never return to their home town. I am more than close to both fires.

I will not excuse this for profit company and the corners they’ve cut over into the next Century during the last40 years. instead of hiring unionized man power they usurped the people’s power grid. FYI This Co. was once two. Electric was one and gas was another. Once they melded gas became the cruddy poor step brother to the electric side. Tragically, They are responsible for so much loss of life and shelter for vast amounts of humans in Calif. They also hold vast amount of California land outside their “grid” zone. Yet they’ve gotten away with one thing only: Their bottom dollar. I say share the gride. Give the power to the people of N. CalifShut them down!!! Too bad this is real life and not another summer Hollywood blockbuster.

Posted by Outwiththegeenie, a resident of Palo Alto Hills

>> I will not excuse this for profit company and the corners they’ve cut over into the next Century during the last40 years.

I don't excuse them either. But, I think the powerdown made sense under the circumstances.

>> Too bad this is real life and not another summer Hollywood blockbuster.

Ever seen this movie? Web Link . -Everybody loses-