Paly, Menlo and Woodside are at home this week. SHP and M-A also on the road 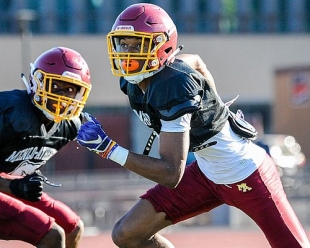 Gunn looks forward to its biggest test of the football season when it travels to take on Santa Clara Valley Athletic League El Camino powerhouse Saratoga on Friday night.

Palo Alto, Menlo School and Woodside are at home this week. Sacred Heart Prep and Menlo-Atherton join Gunn on the road.

Gunn's Saia Faasisila
Here's a look at Friday's prep football matchups: (Note: Some of the times and dates of these games could be subject to change due to power outages).

Gunn at Saratoga, 7 p.m.: Gunn is in for a big test. Saratoga (5-1, 2-0) leads the Central Coast Section, among teams who list their stats on MaxPreps, in total offense at 533.5 yards per game; 338 yards passing and 195 rushing. The team's only loss was to De Anza Division heavyweight Los Gatos.

"We're rested up just in time for our biggest test,'' Gunn coach Jason Miller said. "But there should be less pressure for us. For the first time this season we'll be decided underdogs.''

Saratoga quarterback Payton Stokes has thrown 21 touchdown passes with only two interceptions. And he has also rushed for more than 400 yards.

"They have a dual-threat quarterback who is very accurate,'' Miller said. "He reminds me of Andrew Luck. He's an extremely hard quarterback for a high school team to prepare for. We're going to have to make sure we're fundamental and tackling well.''

Gunn's double-wing running attack is just about diametrically opposite to Saratoga's spread. The Titans are third in the CCS in rushing offense, behind only Wilcox and Carlmont, at 321.2 yards per game, and are 10th in total offense.

"We'll be countering their offense with our own offense,'' Miller said. "Their aerial attack against our ground and pound. It should be an interesting game."

For Gunn, on defense, the mission is to limit damage.

"We'll concentrate on getting some stops,'' Miller said. "Their quarterback is going to make some plays. Our focus will be about limiting his big plays and getting off the field.''

Menlo-Atherton at Terra Nova, 7 p.m.: M-A goes into Peninsula Athletic League Bay Division play on a high note, coming off a 46-13 win over Arroyo Grande. That win broke a three-game losing streak on a very difficult stretch of the schedule.

"Our guys put it together, went back to basics and got the win,'' M-A coach Steve Papin said. "When I got the job with this whole schedule thing I figured the first five were hit or miss. The goals we set out were not to go 10-0. Our first goal was to win the Bay Division.''

"You usually play one bad one a year,'' Papin said. "They got that one out of the way.''

M-A is running into a special event at the Pacifica high school. Halftime will be 30 minutes long for a stadium dedication ceremony to honor former coach Bill Gray.

Sophomore quarterback Matt MacLeod completed 15 of 19 passes against Arroyo Grande for 236 yards. Sacred Heart Prep transfer Raymond Price III got a couple of possessions in his first action of the season. Papin said he plans on giving Price more playing time against the Tigers.

"Matt was on such a roll, I explained that to Raymond,'' Papin said. "This game I'm going to try to implement more triple option and give Raymond more quarterback time.''

Standout lineman Uate Uhila has been cleared to play after missing several weeks with a knee injury. Papin said the plan is to ease Uhila back into action on defense only this week.

Fremont at Palo Alto, 7 p.m.: Going up against Fremont is special for Nelson Gifford, who coached there before taking over as head coach at Paly, his alma mater.

"I still know some of their kids and there's going to be staff members there who I worked with,'' Gifford said. "It should be fun.''

The game, quite frankly, should not be very competitive. Fremont (1-4, 0-1) is coming off a bye after losing its SCVAL De Anza Division opener to Santa Clara, 28-3. Palo Alto (4-2, 1-1) beat Santa Clara last week 42-9 with a running clock employed in the second half.

"We're going to have to work hard on our focus because this game will require a different kind of psychological approach,'' Gifford said. "But our focus is always on competing and playing our best game, not on the outcome. Their JVs kicked our butts last year. They took it personal. They'll be up for us. We're going to see a fight.''

Quarterback Danny Peters sat out the Santa Clara game after taking a hit to the head against Wilcox. He is still in the concussion protocol, so his availability is questionable. The same goes for running back Josh Butler, who has missed the last two games with a shoulder injury.

Last week at Santa Clara, with a running clock in effect throughout much of the second half, Gifford tried to have his team play with dignity and sportsmanship and not try to run the score up. He took away several positives from the experience.

For example, Sebastian Rice got the start at right tackle to replace Alberto Ruiz, who is out for the season with a knee injury, and received plaudits for his performance. And players normally in reserve roles got valuable playing time.

"How great it is to see all the kids play,'' Gifford said. "That is not trivial. It was huge for the team, huge for our program. That is something that is undervalued.''

Sacred Heart Prep at Aragon, 7 p.m.: After a big 42-10 win over Terra Nova last week in their PAL Bay opener, the Gators (4-1, 1-0) meet up with a team that has found itself subject to the up and down swings of high school football fortune. Aragon (1-4, 0-1), more often than not one of the top teams on the Peninsula, is down this year. The only win so far for the Dons was by a 21-20 score over Cupertino, a member of the SCVAL El Camino Division.

"Steve (Sell) is a great coach,'' SHP coach Mark Grieb said of the longtime Aragon coach. "I respect him and how he runs his program. The talent fluctuates. Three years ago he had an awesome team. Our goal always is to come in and compete and be the best we can be that day.''

Grieb is wary of underestimating any opponent after seeing what befell his team earlier this season in a 40-0 loss to Half Moon Bay.

"It's a little more of a challenge for 16, 17, 18-year-olds to come in and compete at that same level,'' Grieb said. "In the one game we didn't play well in so far we thought we were better than the team we were playing. It was a rude awakening.''

Grieb, a record-breaking passing quarterback in his playing days at Oak Grove High, UC Davis and with the San Jose SaberCats, has continued the fly offense and run-oriented approach that was the hallmark of the Sacred Heart Prep teams coached by his predecessor, Pete Lavorato. Grieb's quarterbacks the last two years haven't been asked to put the ball in the air a lot, but have been efficient when called upon and have notably avoided turnovers. Raymond Price III last year had only three interceptions all season. Current QB Teddy Purcell just had his first pass picked off last week against Terra Nova.

"He is elite, in my opinion the best quarterback in the league,'' Grieb said of Purcell. "He's not going to get the opportunities like at Terra Nova, but he's made the most of his chances.''

Carlmont at Menlo School, 6:30 p.m.: Menlo is bringing in lights for a rare night game for homecoming and doing it all with a twist.

Addressing the issue of night-time noise in a residential neighborhood -- an issue all the Atherton schools deal with -- headsets will be handed out to spectators as they enter the facility. Public address announcements then will be heard only on the headsets.

"It's kind of neat, we're doing something new,'' Menlo coach Josh Bowie said. "We want to respect our neighbors. It will make it kind of a cool event.''

Menlo (2-3, 0-1) dropped its PAL Ocean opener to Hillsdale last week, 21-7. This is the first league game for Carlmont (3-2), which moved up after winning the PAL Lake title last year.

"Watching the growth of that program, (Carlmont coach Jake Messina) is getting those guys to play the way he thinks the game should be played,'' Bowie said. "Physical, in-your-face defense and running the Wing-T on offense with a lot of force.''

So one of the keys of the game will be how Menlo's defense holds up against the Carlmont ground game.

"I feel our defense has been pretty solid all year long,'' Bowie said. "We have small guys, but they're scrappy and fly around.''

Lack of offense has been an issue in all three Menlo losses.

"If we can be consistent on offense we can play with any team,'' Bowie said. "If not anyone can beat us. We had 14 penalties for 141 yards against Hillsdale and two scores called back. It's real tough to call plays on third and 39. But if we play the football I see every day in practice we're a solid football team. We just need to find a little bit of success.''

El Camino at Woodside, 7 p.m.: After having two weeks off due to a forfeit and a bye, Woodside coach Justin Andrews feels much better about his team heading into its PAL Lake opener.

"We're going to be deeper,'' Andrews said. "We spent a lot of time cleaning things up and now we're excited to get back after it.''

In losing its first three games Woodside suffered a rash of injuries. The lack of healthy players reached such a dire level that Andrews had to ask for the fourth quarter not to be played Sept. 20 against Seaside and then forfeited the Sept. 27 game with Burlingame.

Both teams are 0-5. El Camino has gone through a similar scenario and was reportedly down to 19 players after losing its starting quarterback and running back in its last game.

In addition to getting players healthy, Andrews used the two weeks off to work on polishing the single-wing offense that was installed this season.

"After spending so much time on assignments we used these two bye weeks to emphasize technique,'' Andrews said. "Now I'm excited to apply everything we fixed.''

The first few seconds after awakening; before I remember the virus
By Chandrama Anderson | 0 comments | 2,691 views

Can you stay healthy without making more trash?
By Sherry Listgarten | 2 comments | 1,962 views

Think about helping others in our coronavirus-affected area
By Diana Diamond | 4 comments | 1,871 views