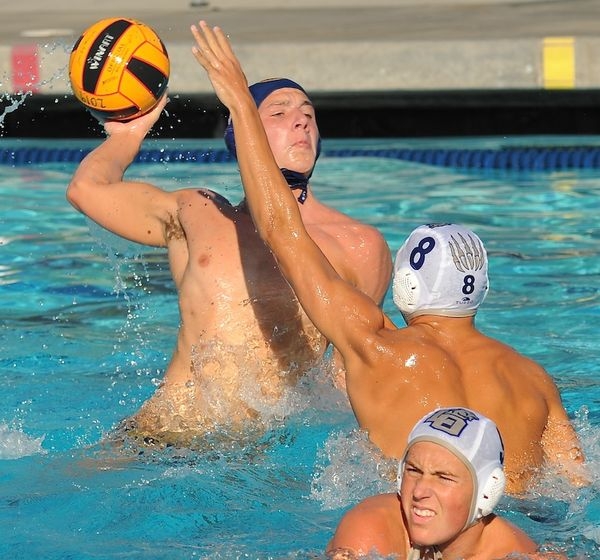 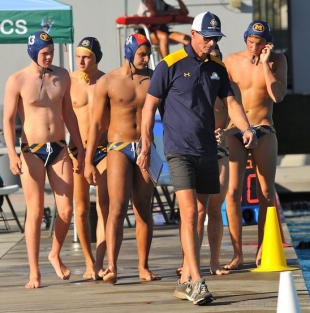 Menlo School head coach Jack Bowen walks to the pool following a time out during a 16-11 loss to Los Osos at the S&R Sport Tournament in Irvine on Saturday. Photo by Keith Peters.

Luke Weigle scored with 1:40 remaining to play, giving Sacred Heart Prep a 9-8 victory over West Catholic Athletic League rival Bellarmine in the fifth-place match of the S&R Sports Invitational at the William Woollett Jr. Aquatics Center in Irvine on Saturday.

The Gators (10-2) beat Dana Hills 10-6 earlier in the day to advance into the fifth-place game.

Jake Tsotadze scored three goals to lead the Gators past the Bells. The same two teams meet at 6:30 p.m. for a WCAL contest hosted by Bellarmine.

“It should be a real barn-burner Wednesday,” SHP coach Brian Kreutzkamp said.

The teams have split their first two meetings. Bellarmine beat the Gators 11-7 in the semifinals of the St. Francis Invitational three weeks ago.

Neither team led by more than two goals during the contest. The Gators were ahead 8-6 before the Bells tied it with four minutes remaining.

Luke Johnston recorded a steal in the final two minutes that led to Weigle’s game-winner. Will Swart, who had two assists and drew two exclusions, had a field block and goalie Wyatt Stenson, who had 11 saves, came with a big save over the final 1:40.

Weigle added three goals and the Cardinal scored the first four goals in the win over the Dolphins. Johnston and Swart each scored twice.

Menlo led 7-4 early in the second period but Los Osos rallied to take the lead in the third period and never looked back.

Connor Enright scored five goals to lead the Knights (11-4), who travel to play Mitty at 3:30 p.m. Wednesday in a WCAL match. Greg Hilderbrand added three goals for Menlo, playing without one of its top scorers in Connor MacMitchell.

Bachler and the Facey sisters each scored twice for the Gators (12-2), who host Presentation in a league match at 5:30 p.m. Wednesday.

Singapore's oldest cafe was about to open in Palo Alto. Then, the coronavirus hit.
By Elena Kadvany | 2 comments | 7,240 views

A Pragmatic Approach to A Trillion Trees
By Sherry Listgarten | 4 comments | 4,352 views

Repairing a Disagreement with your Beloved & “Physical” vs. “Social” Distancing
By Chandrama Anderson | 2 comments | 3,050 views