Bears wake up and play solid football in nonleague win 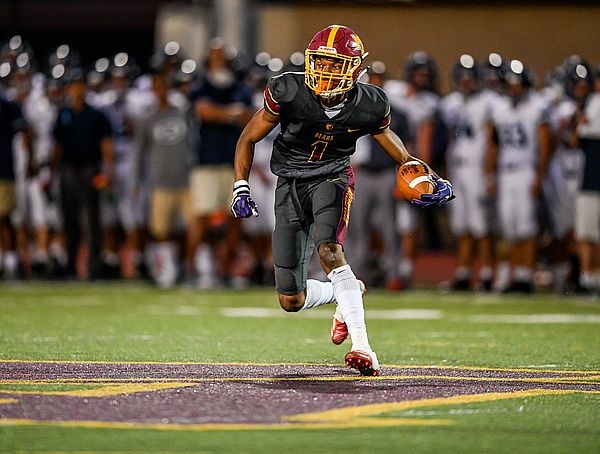 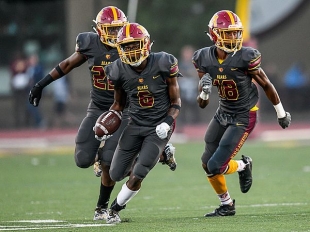 Menlo-Atherton got to play a football game at home for the first time in over a month. The Bears did not disappoint, beating Arroyo Grande 46-13 on Friday night in a nonleague contest on 'Pink Out' night.

The Bears (2-3) scored on their first play from scrimmage after the defense stopped a fake punt try near midfield. Sophomore quarterback Matt MacLeod pitched the ball to wide receiver Troy Franklin, who maneuvered his way through traffic and scored from 42 yards out.

Joe Posthauer/Noah Eisner
"I think that set us up and got us energized," Franklin said. "Over the past few games we have been driving into the red zone. It got to the point we needed to finish. My mindset is to always help the team put points on the board whether that means getting to the end zone or getting to the red zone and let someone else score."

Franklin also caught a pair of touchdown passes and four others scored as part of a breakout game after losing three straight in which M-A was outscored by a combined 136-33.

"We were mad after losing three in a row," said MacLeod, who threw for 236 yards on 15 of 19 passing. "We were well-prepared for this one. There are still things we can pick up, things where we can improve. We can't let this win get to our heads."

"I think this team just got tired of getting their butts kicked," Bears coach Steve Papin said. "We had a great week of practice and our guys came out focused., We have to keep playing consistent football, stay humble and stay focused."

Arroyo Grande (4-3) was able to move the ball against M-A but made enough mistakes to keep from scoring early: The fake punt play that didn't work, a bad snap, a dropped pass and a penalty all worked against the Eagles.

Bear linebacker Dominic Paga provided the defensive highlight of the game. He picked up a loose ball and rambled 57 yards for a touchdown that sparked a sideline celebration of mammoth proportions. The moment Paga crossed over the sideline afterward, the entire team was there to mob him as though he just hit a walk-off.

"He's been injured and he's such a good guy," Papin said. "The team was happier than he was."

Thomas Taufui received extended playing time as a running back and answered the call, picking up 86 rushing yards and scoring from 28 yards out. Francisco Sanchez and Dontae Clifton also scored rushing touchdowns.

Justin Anderson did not score but he was a big reason the Bears accumulated 504 total offensive yards. He caught seven passes for 81 yards, all in the first half, sometimes turning a swing pass into a first down. He and Franklin combined on 11 receptions and 144 yards.

"Matt doesn't have to throw the ball 80 yards," Papin said. "He gets the ball out quick to those guys, who can make something out if it."

Raymond Price III, who transferred in from Sacred Heart Prep, where he was an all-league quarterback, became eligible this week and saw his first action. He played the first series of the second half, which didn't amount to much.

Price came back in the fourth quarter and drove the Bears 80 yards in 18 plays that all but ran out the clock. The actual yardage gained was 100 yards as two holding calls forced M-A backward. Both calls came on long runs by Price, who had 65 yards and a touchdown erased as a result.

As it was, the dynamic Price gained 43 yards on seven carries over his two series and looked comfortable in directing the offense.

"Raymond is a phenomenal talent," Papin said. "Matt is a talent. We have packages for both. When you have two like that, you have to love it."

Coronavirus: Plan ahead now for a big outbreak
By Diana Diamond | 20 comments | 4,376 views

The first few seconds after awakening; before I remember the virus
By Chandrama Anderson | 0 comments | 1,226 views