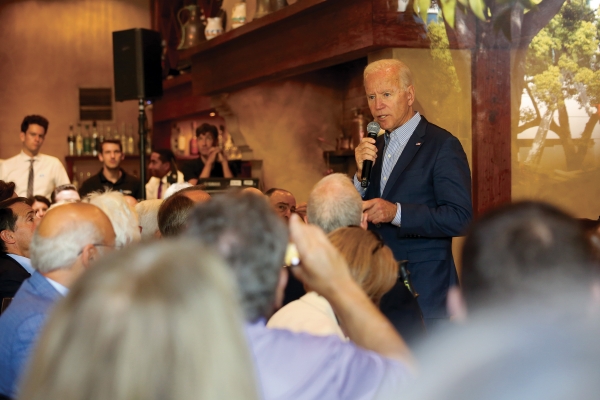 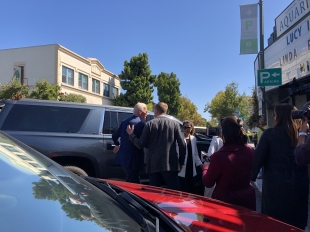 Democratic presidential candidate and former Vice President Joe Biden was in Palo Alto on Thursday for a private fundraising luncheon at a downtown restaurant.

He arrived at the Greek restaurant Evvia Estiatorio, located at 420 Emerson St., around 1:30 p.m. and left shortly before 3 p.m. Among the hosts were U.S. Ambassador to Belgium Denise Bauer; real estate magnate George Marcus (who owns Evvia Estiatorio) and his wife, Judy; Dashboard Technology President Wade Randlett and his wife, Lorna; Palo Alto real estate developer John McNellis; Michelle Kraus, a tech executive; trial attorney Joe Cotchett and others. The per-person tickets range from $1,500 to $10,000. The lattermost level includes a VIP reception, according to an invitation.

Biden was also scheduled for two fundraisers in San Francisco early Thursday evening, including one hosted by U.S. Sen. Dianne Feinstein and her husband, Richard Blum. His swing through the Bay Area was preceded by fundraisers by his wife, Dr. Jill Biden, who appeared at three events in Los Altos and San Francisco on Sept. 27 and two in Sonoma and Fremont on Sept. 28.

Tables were set for an estimated 80-100 people who attended Thursday's fundraiser that featured a light buffet in Palo Alto. Among the attendees were Palo Alto City Councilwoman Liz Kniss and Arthur Keller, a former planning commissioner and City Council candidate.

Palo Alto resident Carol Saal, a Democrat, said she hasn't decided who she will vote for.

"There are not a lot of opportunities to meet the candidates. Since I live here, I was very interested in getting to know him and hear what he says," she said.

With her support and donation, Saal said she hopes to help make Biden the Democratic presidential nominee.

"I'm hoping he will go the distance. He is the most experienced. He is ready to hit the ground running," she said.

"I think this is a terribly important election," said Tiburon resident David Readerman while waiting outside of Evvia to attend Thursday's fundraiser. He added that he's interested in meeting with all the candidates to hear their speeches as opposed to listening to sound bites before deciding who will earn his vote.

"I do know I will vote against Trump," Readmeran said.

But he's been giving Democratic Party operatives a message: "I hope the Democrats won't treat California as a big ATM machine."

Democrats need to support California's issues, he said, noting that quality of life for the state's residents is paramount, as well as protecting clean air and water.

The Marin County resident said he recently switched his voter registration to become a Democrat. Readerman previously affiliated himself with the Republican party, which he said has lost its moral compass under President Donald Trump.

He said the 2020 election is going to be a "hard fight" and looks forward to evaluating the issues before casting his ballot.

"I hope the voter participation in 2020 sets all records in this country," Readerman said. "I really hope, no matter what your persuasion is, I just hope everybody that's eligible to vote gets out and goes to the ballot box."

Cotchett, a co-host of the fundraiser, said he's known Biden for about 20 years and believes the former vice president is ready for the job.

"It means absolutely nothing to me that he's 74," Cotchett said. If Biden returns to the White House, "he will be supported by terrific people."

Biden is lagging behind other major primary candidates in campaign contributions, but he also started late. He didn't declare his candidacy until late April during the second fundraising cycle. Democratic U.S. Sen. Bernie Sanders raised $25.3 million in the third quarter for a total of $71.6 million to date and South Bend, Indiana Mayor Pete Buttigieg raised $19.1 million, down from $24.8 million in the second quarter, for a total of $43.9 million.

Elizabeth Warren hasn't yet announced her third-quarter total, but in the second quarter she raised $35.6 million.

President Donald Trump, who is running for re-election as the front-running Republican candidate, raised $125 million in the third quarter, according to announcements and filings with the Federal Election Commission.

The last time Biden came through the area was in June, when he attended three high-priced, private fundraisers in San Francisco, Belvedere and Los Altos, according to news reports.

Biden's trip to the Bay Area comes on the heels of public events in Nevada, where he made stops in Las Vegas and Reno on Wednesday. Biden called out the president in Reno over the scandal that has led to an impeachment probe.

Biden said that Trump allegedly solicited help from a foreign government to dig up political dirt on Biden and his son, Hunter, during a July 25 telephone call to the president of Ukraine, which betrayed the foreign policy and national security interests of the United States in the service of his own re-election.

In his speech, the former vice president targeted the president's character and urged voters to consider how the country has arrived at "this sobering moment in our history," according to speech notes provided to the media.

"The American presidency is an office of immense power. That's why character matters more in a president than any other office in our government," he said.

Biden isn't the only presidential candidate making last-minute sweeps through the Bay Area before the next campaign-funding reporting cycle closes on Oct. 10. U.S. Sen. Cory Booker is scheduled to be in Menlo Park for an event hosted by Linda and Ted Schlein and in Los Altos for a fundraiser hosted by Elizabeth and Michael Brazinski. U.S. Sen. Amy Klobuchar raised money at an event hosted in Atherton by Kim Young and John Morague on Tuesday. Pete Buttigieg, mayor of South Bend, Indiana, and U.S. Sen. Kamala Harris also came to northern California for private events on Sept. 29 and 30.

Read about Biden's speech at the Palo Alto fundraiser: Biden on Trump: 'We've got to save capitalism from this guy"

What Will They Do Next is a registered user.

I hope they can find parking.

Report Objectionable Content
Email Town Square Moderator
44 people like this
Posted by Jonathan Brown
a resident of Ventura
on Oct 3, 2019 at 11:13 am

Jonathan Brown is a registered user.


I wish Biden would explain his son's dealings in Ukraine and China. All he's done so far is say Trump shouldn't be one to question others' integrity. While that may be true, the lack of transparency from Biden is worrying. The country needs a leader who can cut through the paranoia, pessimism, and divisiveness. We've lost our American way if truth and justice are no longer part of it.

Report Objectionable Content
Email Town Square Moderator
6 people like this
Posted by Resident
a resident of Another Palo Alto neighborhood
on Oct 3, 2019 at 11:16 am

Definitely not a day to go downtown for lunch. I expect the other restaurants will feel a big loss in customers.

Report Objectionable Content
Email Town Square Moderator
25 people like this
Posted by musical
a resident of Palo Verde
on Oct 3, 2019 at 11:54 am

>> I hope they can find parking.

And don't leave valuables in the car.

Report Objectionable Content
Email Town Square Moderator
9 people like this
Posted by YP
a resident of Crescent Park
on Oct 3, 2019 at 12:54 pm

YP is a registered user.

Report Objectionable Content
Email Town Square Moderator
33 people like this
Posted by Rbt Mueller
a resident of Green Acres
on Oct 3, 2019 at 1:07 pm

> I wish Biden would explain his son's dealings in Ukraine and China.

He has. If you want to believe that bs that trump/Rudy is peddling, go ahead. Rudy's been meeting in prison with Paul Manafort, convicted felon, to make up stories about Biden because they know Biden (and all leading Dems) are killing Trump in their own internal polls.


Report Objectionable Content
Email Town Square Moderator
14 people like this
Posted by MAGA
a resident of Barron Park
on Oct 3, 2019 at 1:19 pm

Report Objectionable Content
Email Town Square Moderator
5 people like this
Posted by YP
a resident of Crescent Park
on Oct 3, 2019 at 1:34 pm

YP is a registered user.

Report Objectionable Content
Email Town Square Moderator
13 people like this
Posted by What Will They Do Next
a resident of Old Palo Alto
on Oct 3, 2019 at 9:45 pm

What Will They Do Next is a registered user.

The first few seconds after awakening; before I remember the virus
By Chandrama Anderson | 0 comments | 3,544 views

Can you stay healthy without making more trash?
By Sherry Listgarten | 6 comments | 2,946 views

Think about helping others in our coronavirus-affected area
By Diana Diamond | 7 comments | 2,687 views