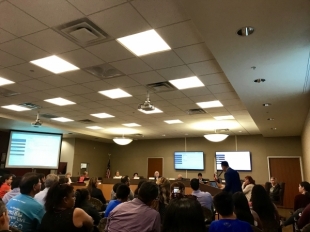 Joel Portillo, right at podium, addresses the Sequoia Union High School District board of trustees on Aug. 7. Portillo will be principal of KIPP's high school expected to open at the current site of Aspire East Palo Alto Phoenix Academy. Photo by Elena Kadvany.

Anne Le Ziblatt, formerly of Tamarine and Bong Su, is back with a Vietnamese noodle bar in Redwood City
By Elena Kadvany | 7 comments | 3,228 views