Proposed terms lay out timeline for redevelopment of community center 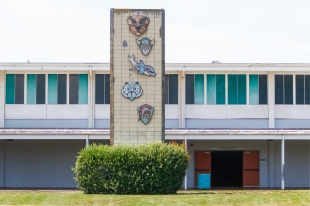 Cubberley Community Center, a 35-acre site jointly owned by the city of Palo Alto and school district, which are working together to create a master plan for the complex. The city's lease on 8 acres of the site expires in December. Photo by Veronica Weber.

After some uncertainty about the future of the Palo Alto school district's lease of Cubberley Community Center to the city, it appears that the two agencies are headed toward a five-year extension of the soon-to-expire agreement.

Superintendent Don Austin presented the proposed lease terms to the Board of Education on Tuesday night. He and his staff met with City Manager Ed Shikada and city staff to negotiate the lease last week. The terms of the lease are not final, but the school board expressed support for most of them. The City Council discussed the lease in closed session on Monday but did not make any public announcements.

The lease offer lays out a multiyear timeline for redeveloping Cubberley, the pace of which has frustrated the city as the district feels less urgency to rebuild its 27 acres at the Middlefield Road site. Under the offer, the board and city are to accept a master plan for Cubberley by next summer.

The proposed agreement runs from January 2020 through Dec. 21, 2024. If approved, the city would by December 2020 complete an infrastructure assessment of the aging community center and an "implementation plan for near-term and long-term development." By the following December, the city would finish a conceptual design for an initial phase of building improvements.

By the end of 2022, the two agencies would discuss sharing the cost of identified infrastructure improvements and agree on adjusting the dividing lines of their acreage if necessary to accommodate renovations.

Other terms of the lease include forming by January an ad hoc committee, made up of district and city representatives, to discuss shared use facilities, cost sharing for improvements, phasing for development of Cubberley and other issues. As proposed, the committee would consist of two board members, two City Council members, the superintendent or a designee and the city manager or designee.

The tentative agreement continues the city's current payment rate but removes a 3% cost-of-living escalator clause that accounted for about $150,000 per year. The city will also continue to receive $1.8 million annually to fund capital improvements at Cubberley. Austin said he will bring to the next board meeting a report on what these improvements have included.

By January, the district and city hope to negotiate a separate lease for child care sites at Cubberley.

The sole lease term board members objected to was a proposal from the city to hold a joint meeting of the City Council and school board by December. They repeated concerns that without a clear goal or outcome, it would be unproductive to bring together the two bodies in a public setting. Only board member Shounak Dharap said he would still like to have a joint meeting in the future.

Otherwise, board members were supportive of the proposed lease and lauded Austin for coming to a tentative agreement with city staff.

"The uncertainty was frankly the biggest concern I had," Vice President Todd Collins said. "This gives us a great deal of certainty so that's really good."

Austin said he planned to take the board's comments back to the city on Wednesday and would move forward with next steps to finalize the agreement.

In other business Tuesday, the board also discussed renewing its parcel tax, which expires in 2021. Voters last approved an extension of the parcel tax in 2015, with an increase of $120 per parcel. The district could put a measure on the ballot in either 2020 or 2021.

8 people like this
Posted by Sometimes the Best Solution is the Simplest
a resident of Crescent Park
on Sep 25, 2019 at 1:04 pm

I'm glad to see that good thinking has finally emerged. Cubberley may yet again be needed as a third high school or for some other district purpose and we should ensure it's fully available for that when the time arises.

Until then, it's a terrific resource for many in our community and that's important too. The organizations and individuals who use it now are happy to be there. There's no urgent need to spend tens or hundreds of millions of dollars on the site with yet more committees, consultants, and studies. Extending the present arrangement another five years is just fine. I hope that can happen without further drama.

Why is the Council meeting in closed session to talk about Cubberley? The school board is meeting in public.

Filseth, care to enlighten us? Remember us, your constituents?

Report Objectionable Content
Email Town Square Moderator
2 people like this
Posted by My take on the accounting
a resident of Midtown
on Sep 26, 2019 at 11:51 am

My take on the accounting is a registered user.


The City uses our tax money to lease Cubberley from PAUSD. PAUSD uses those proceeds for the schools. Residents reap the benefits of those lease payments in terms of better schools and higher property values. The City is in effect a middleman for more of our tax money going to the school district.

"My take on the Accounting" posted earlier is a brilliant post and a fact we forget. What if you sold Cubberly all together, to a tech company, housing and the whole community would appreciate, let them pay for their own improvements, oh, that wouldn't work either because according to that great "post" above, we residence might be entitiled to some of the profits.

Report Objectionable Content
Email Town Square Moderator
4 people like this
Posted by Anon
a resident of Another Palo Alto neighborhood
on Sep 27, 2019 at 5:35 pm

Posted by Judith Henderson, a resident of Duveneck/St. Francis

>> What if you sold Cubberly all together, to a tech company, housing and the whole community would appreciate, let them pay for their own improvements,

Since you asked, I would oppose that proposal. We do not need a single square foot more of tech company office space in this town. Period.

But, I also wish that we had three high schools again, but, the Board has decided that it prefers two too-large schools. Yes, I've heard all the arguments about class variety, but, I don't think they hold up. In any case, both Gunn and Paly have been enlarged at great expense, so, reopening Cubberly is not going to happen any time soon. Still, eventually it will be needed.

As for expanding housing, I much prefer other sites, some of which are occupied by tech companies right now. Let's build down the jobs/housing imbalance by converting tech office space to housing.

Report Objectionable Content
Email Town Square Moderator
2 people like this
Posted by Pat Burt
a resident of Community Center
on Sep 27, 2019 at 5:58 pm

Pat Burt is a registered user.


@Judith
Around 1990, the state passed a law that restricted the ability of school districts to sell off surplus properties. This is a reason that the city council decided six years ago to not pay the school district for a “covenant not to develop”. Instead, the city put that $1.8 million into a dedicated Cubberley facility maintenance and construction fund.
Aside from the state law, Cubberley has been a valued community center used for non profit and community services for 30 years, although one in bad need of renovation.

The first few seconds after awakening; before I remember the virus
By Chandrama Anderson | 0 comments | 3,345 views

Can you stay healthy without making more trash?
By Sherry Listgarten | 6 comments | 2,758 views

Think about helping others in our coronavirus-affected area
By Diana Diamond | 7 comments | 2,554 views