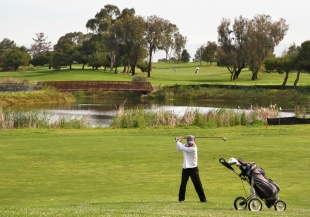 A golfer swings his club as he plays on the fairway near a pond at Shoreline Golf Links on April 7. The water circulating in the pond is a blend of fresh water and recycled water provided by the City of Palo Alto. Photo by Veronica Weber.

Touting the environmental benefits of treating and reusing wastewater, the Palo Alto City Council expressed high hopes Monday for a proposed deal with Santa Clara Valley Water that would transform local effluent into a money-making commodity.

The proposed deal, which has been in negotiations for over a year, includes two distinct elements. The first calls for Valley Water to help build a salt-removal plant near the existing Regional Water Quality Control Plant in the Baylands by paying about $16 million for the $20-million facility. By reducing salt levels in local wastewater, the plant would allow the city to greatly expand its potential to irrigate landscapes in and near the city.

Today, the city only uses about 5% of its wastewater for irrigational uses, both locally and in Mountain View. Karla Dailey, a senior resource planner in the Utilities Department, said local water reuse could potentially provide 50% of Palo Alto's water demand. That, however, would take "significant investments in treatment facilities and conveyance," she said.

The second element of the agreement would be a deal under which Palo Alto would send about half of its treated effluent south of Mountain View, to Valley Water's service area. Valley Water would pay $1 million to Palo Alto and its partners in the regional plant — Mountain View, Stanford University, Los Altos, Los Altos Hills and the East Palo Alto Sanitation District.

And as part of the deal, Palo Alto would for the first time have the option to request water from Valley Water — though utility staff doesn't believe they will need to use that option any time in the near future.

If approved, the partnership would mark a new era for Palo Alto, one of about two dozen Peninsula cities that gets its water from the San Francisco Public Utilities Commission. About 85% of the city's water supply comes from the Tuolumne River in Yosemite and arrives through the Hetch Hetchy system, with the balance coming from local reservoirs. After decades of looking north for its water partnerships, the city would look south.

But while council members tout the expansion of the recycling water system as an important measure to promote sustainability, some local environmentalists aren't as sure. Several residents, including former Mayor Peter Drekmeier, pointed to Valley Water's opposition to the Bay Delta Plan, a proposal by the state Water Resources Control Board to require the Tuolumne and other tributaries of the San Joaquin River to have "unimpaired flow" of between 30% and 50%. While the Palo Alto City Council voted last year to support the plan, both Valley Water and the SFPUC have taken positions against it.

Drekmeier said that while he likes the proposed term sheet, he would like the water district to reassess its position on the Bay Delta Plan. Resident David Warner also said that the environmental benefits of the proposed agreement are "murky at best," given that Valley Water will be able to use the water it gets from the city in any way it wants to. As such, the water transfer would not necessarily reduce imports, he said.

Former City Councilwoman Emily Renzel, a longtime conservationist, also warned the council against placing new industrial facilities on dedicated parkland. While voters agreed in 2011 to "undedicate" a portion of Byxbee Park to allow for a new plant, the measure they passed designated the facility to be dedicated to composting, not water treatment, she noted.

"When the city makes commitments, even to itself, to preserve certain aspects of parkland, they ought to take them seriously and the public should be able to rely on them," Renzel said. "And I hope you look very seriously to the kinds of commitments you're making with respect to parkland and our Baylands."

The council, however, was mostly on board with the new plan. Councilman Tom DuBois, who represents Palo Alto on the recently formed Joint Recycled Water Committee, said he supports the deal and argued that expanding water use is good for both Palo Alto and for the entire region.

"This is a waste product we're talking about. ... This agreement starts to put a value on it and starts to pay us now," DuBois said.

He also argued that the city shouldn't let the city's and Valley Water's divergent views on the Bay Delta Plan get in the way of the partnership. Mayor Eric Filseth concurred. Even though he is a strong supporter of the Bay-Delta Plan, Filseth suggested that it would be inappropriate for the council to demand that other agencies adopt Palo Alto's view. The district, he said, should support the Delta Plan because it's the "right thing to do," not because the contract with the city hinges on it.

"For us to say, 'We won't do this unless Valley Water supports our position' sort of feels like we're going to 'take our ball and go home' unless you do it our way. I don't think we should do it," Filseth said.

His colleagues largely shared his position, with Vice Mayor Adrian Fine lauding the idea of diversifying the city's water supply ("especially if we're getting paid to do so") and Councilwoman Alison Cormack noting that the transfer agreement would allow the city to greatly reduce how much effluent it releases into the San Francisco Bay.

"That's a big part of what will happen if we're able to implement this small-location salt-removal plant," Cormack said.

Staff from the city and Valley Water will continue to refine the proposal, which is expected to return to the council in November.

A Pragmatic Approach to A Trillion Trees
By Sherry Listgarten | 1 comment | 2,444 views

The University of California’s flexible policies during COVID-19
By John Raftrey and Lori McCormick | 6 comments | 1,904 views

Repairing a Disagreement with your Beloved & “Physical” vs. “Social” Distancing
By Chandrama Anderson | 0 comments | 1,260 views