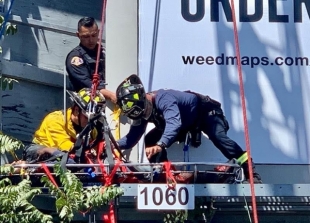 East Palo Alto and Menlo Park police were able to safely take into custody Sept. 18 a mentally ill man who was wielding the spear-like tip he’d broken off from a wrought-iron gate and who was threatening to harm himself or possibly officers, East Palo Alto Chief Albert Pardini said in a Sept. 20 post on the department's Facebook page.

The officers used crisis de-escalation techniques to try to diffuse the situation and ultimately used a Taser to apprehend the man, Pardini wrote. But police did not fire a single shot, even though he came towards them more than once.

The incident began when East Palo Alto patrol officers responded to a call about a man who was throwing Facebook bicycles into the street at Rainier’s Service Station, 1905 East Bayshore Road, on Sept. 18 at 12:47 p.m. A second caller reported the man was walking in the middle of the street in front of cars, Pardini wrote.

“Officers were very familiar with the male who they have contacted numerous times due to his psychiatric crisis incidents,” Pardini noted.

The man is the same individual who had stranded himself on the catwalk of a billboard in the same area of the city on Sept. 3 and had to be rescued by firefighters using a makeshift crane.

Officers have encountered significant challenges when dealing with the man in the past, including episodes of violence, Pardini stated.

“He can be very dangerous when he is in a state of psychiatric crisis,” Pardini wrote. “He is in excellent physical shape and has the body and strength of a professional athlete.”

The first officer who arrived on scene at 12:51 p.m. began using crisis intervention training to communicate with and calm the agitated man. The man began walking away from the officers toward San Francisquito Creek, Pardini stated.

The man was irate, so officers used a technique known as “time and distance” to communicate with him while not provoking a confrontation. When the man reached the creek, he climbed onto the concrete ledge and threatened to jump into the creek. The officers kept talking to him to de-escalate the situation.

The man eventually came down from the ledge, but he walked away from the officers and down a dirt path along the creek. He continued down another path near the 100 block of Verbena Drive. Still talking to him, the officers followed. When he reached the 200 block of Verbena, he sat down in the middle of the road for a couple of minutes, then got up and started shadow boxing. He began walking while still shadowboxing, continuing onto the 200 block of Azalia Drive, Pardini stated.

Officers called on the Menlo Park police to close off streets so that officers could maintain a safe distance from the aggressive man and to keep motorists from running into him. East Palo Alto police don’t carry Tasers, but Menlo Park officers do, which offered police a less-than-lethal option in case the man became violent, Pardini said.

Still on Azalia Drive, the officers kept talking to the man and had the dispatcher attempt to call his psychiatrist, in the hopes of convincing him to go to the hospital for care.

But the man broke off the top decorative piece of a homeowner’s wrought-iron gate with his hand and held it like a weapon. He alternated between putting it to the back of his neck and threatening to harm himself and holding it up in a threatening manner. He advanced toward officers, who retreated while still using their crisis-intervention training.

The man continued closing the distance between himself and a Menlo Park Police officer, however. The officer deployed a Taser, which caused the man to fall to the ground, and police restrained him. An ambulance that had been waiting transported him to the hospital for psychiatric evaluation, Pardini said.

"The officers used crisis de-escalation techniques to try to diffuse the situation"
"He first officer who arrived on scene at 12:51 p.m. began using crisis intervention training to communicate with and calm the agitated man. The man began walking away from the officers toward San Francisquito Creek, Pardini stated.

The man was irate, so officers used a technique known as “time and distance” to communicate with him while not provoking a confrontation."

Hopefully the dude thanks the cops.

Report Objectionable Content
Email Town Square Moderator
4 people like this
Posted by CrescentParkAnon.
a resident of Crescent Park
on Sep 22, 2019 at 6:28 pm

Good to hear. A real step forward, It sounds like this man may be a continuing
problem. Can he get treatment or be put on some kind of psychiatric hold.

Do we have any idea what gets a person to this situation?

Report Objectionable Content
Email Town Square Moderator
4 people like this
Posted by Thankfully
a resident of Barron Park
on Sep 23, 2019 at 11:58 am

Thank goodness republicans dismantled a the welfare state, so instead of living in and institution, this guy is roaming the streets looking to to harm himself or others.

I literally can’t believe the story is about how police de escalated this situation and not how conservatism has thrust these psychiatric patients into the lap of society so republican business owners can pay even lower taxes.

This country is depressingly broken.

But yeah, good job not shooting the crazy guy. That’s a great headline.

Report Objectionable Content
Email Town Square Moderator
4 people like this
Posted by PST
a resident of South of Midtown
on Sep 23, 2019 at 2:45 pm

PST is a registered user.


Sounds like Palo Alto police could learn a few things from these folks. The recent mistreatment of a woman with a brain tumor they presumed was mentally ill and the tragic and horrific suicide by cop killing a couple years ago are just two examples that management is failing to adequately train these brave people serving our community.

Report Objectionable Content
Email Town Square Moderator
14 people like this
Posted by Bring Back Agnews
a resident of Adobe-Meadow
on Sep 24, 2019 at 8:23 am

>> ...republicans dismantled a the welfare state, so instead of living in and institution, this guy is roaming the streets looking to harm himself or others.

These mentally-ill/repeat offenders need to be conserved by the state & institutionalized for public safety.

Years ago, Santa Clara County had a place called Agnews where they sent these types of people.

It was a good call in getting a sizable number of the mentally-ill off the streets.

Mentally-ill homeless people are dangerous to society & should be sequestered where they can be cared for.

Report Objectionable Content
Email Town Square Moderator
6 people like this
Posted by Time For A FULL Lockdown Of The Mentally Ill
a resident of College Terrace
on Sep 24, 2019 at 3:05 pm

The mentally ill should not be allowed to roam the streets if there are repeated offenses on their part.


Report Objectionable Content
Email Town Square Moderator
3 people like this
Posted by Kenny
a resident of University South
on Sep 24, 2019 at 5:38 pm

Great example of California closing most of the mental hospitals and letting wackadoodles walk around with spears. People can blame Ronald Regan for that, but the Democrats have long ruled the roost in our state. So far, they seem content to let these crazy folks wander about unhindered. I guess concern for the poor is no longer a plank in the Democratic Party platform, especially when they can instead spend billions on the high-speed rail to nowhere.

A lot of the mentally ill are housed in group homes. State law requires that they be given at least one activity each day. The lazy home operators often take the easy way out, telling them "Go take a walk for your activity today". Hey, they are there to collect money from the state, and do the minimum required to scrape by. The mentally ill person takes a walk and sometimes gets disoriented. Mentally ill, remember? That individual then becomes a homeless crazy person.

Report Objectionable Content
Email Town Square Moderator
3 people like this
Posted by Bring Back Agnews
a resident of Adobe-Meadow
on Sep 25, 2019 at 7:44 am

The homelessness problem could be reduced by close to 90% if (1) the mentally-ill were placed under state conservatorships & sequestered in government sanitariums, and (2) chronic substance abusers were rounded up & placed in government treatment centers.

The remaining 10% homeless would be primarily economic cases (i.e. single mothers with children, displaced workers, elders & perhaps others who have fallen on hard times through no fault of their own etc.) This type of homelessness is far easier to deal with on all levels.

I was once homeless having lost my car & condo due to a job lay-off & difficulty in finding work. I have encountered a good number of homeless people along the way & 90% of them are [portion removed] either due to alcohol/drugs and/or mental illness.

The first few seconds after awakening; before I remember the virus
By Chandrama Anderson | 0 comments | 2,342 views

Can you Stay Healthy without Making More Trash?
By Sherry Listgarten | 2 comments | 1,646 views

Think about helping others in our coronavirus-affected area
By Diana Diamond | 2 comments | 1,252 views